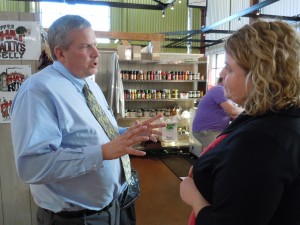 CEDAR RAPIDS – Bill Northey said he wasn’t laying the groundwork for a possible Senate run during his trip to Cedar Rapids, but Iowa’s secretary of agriculture hasn’t ruled out the possibility.

“I haven’t decided,” Northey said Thursday, adding that he is in discussions with Lt. Gov. Kim Reynolds, U.S. Rep. Steve King (R-IA) and others who also are considering a bid for the Senate seat being vacated by Democrat Tom Harkin.

That decision, which the Republican doubts will result in a “crazy, bloody primary,” likely will come within the next two months, he said.

Northey, a Spirit Lake farmer serving his second term as state ag secretary after re-election in 2010, said his wife, Cindy, is supportive, but the family is weighing the trade-offs associated with the campaign and serving in the Senate. 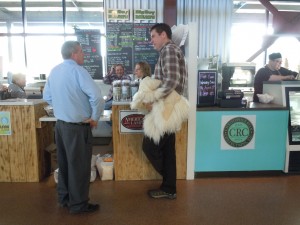 Nathan Lein, president of Big Boy Meats, talks to Iowa Secretary of Agriculture Bill Northey on Thursday, March 7, 2013, at the NewBo City Market in Cedar Rapids. Lein is holding a Lincoln Longwool sheepskin that he showed to Northey. (photo/Cindy Hadish)

“It’s gonna be a very high profile race,” he said, citing the amount of funding that will likely come from outside the state in the battle for Iowa’s first open Senate seat in decades. “It takes a lot of money to get your voice out.”

Northey noted that while he still is able to farm on weekends in his current post, serving in Washington, D.C., would make that difficult, as would seeing his three grandchildren, who live within 40 minutes of his home.

“Certainly, we’d be giving up some things,” he said, “but this is an opportunity to serve in an important way.”

Northey was impressed with the market’s role as an incubator for entrepreneurs and talked with interim director Wendy Zimmermann, vendors and customers at the indoor market, which opened in October.

Neither visit was political, he said, noting the museum also has agricultural ties with Czech immigrants who came to the United States for jobs at meatpacking and corn starch plants.