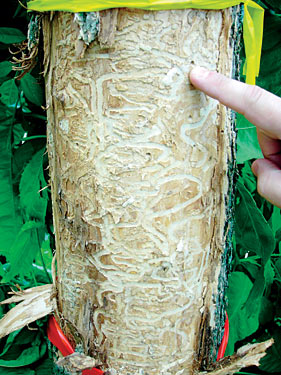 Emerald Ash Borer, the invasive beetle that destroys all types of ash trees, has been confirmed in Keokuk County, bringing to 19 the number of counties where it has been identified in Iowa so far.

That’s  nearly one-fifth of the state, and experts say it’s only a matter of time before it’s found statewide.

For background, see these past articles and for more about today’s announcement, read on for more from the state:

DES MOINES – Emerald Ash Borer (EAB) has been positively identified in the Iowa community of Hedrick in Keokuk County. EAB kills all ash tree species and is considered to be one of the most destructive tree pests ever seen in North America.

An ash tree with evidence of recent woodpecker activity was observed by an Iowa EAB Team member. A branch was removed from the tree and a suspect larva was collected.

“With the recent discoveries in nearby areas announced in December, this find is no real surprise,” said Mike Kintner, Iowa Department of Agriculture & Land Stewardships EAB and Gypsy Moth Coordinator. “Like many other finds this winter, woodpecker activity continues to capture our attention of potentially EAB infested trees. The winter months are an opportune time to scout for the signs we are looking for, such as light-colored bark areas, or flecking, and feeding holes as a result of woodpeckers searching for EAB larvae to feed on.”

Nineteen Iowa counties now have confirmed EAB infestations. A statewide quarantine, issued on Feb. 4, 2014, remains in place and restricting the movement of hardwood firewood, ash logs, wood chips and ash tree nursery stock out of Iowa into non-quarantined areas of other states.

“We still strongly urge Iowans to not move firewood long distances,” said State Entomologist Robin Pruisner of the Iowa Department of Agriculture and Land Stewardship. “A large portion of Iowa is not showing signs of EAB infestation; let’s keep those areas EAB-free as long as possible but not moving wood that potentially harbors EAB or other tree pests. Be vigilant, report suspicious symptoms in counties that are not yet known to be infested to a member of the Iowa EAB Team.”

The Iowa EAB Team strongly cautions Iowans not to transport firewood across county or state lines, since the movement of firewood throughout Iowa or to other states poses the greatest threat to quickly spread EAB and other plant pests. Most EAB infestations in the United States have been started by people unknowingly moving infested firewood, nursery plants or sawmill logs. The adult beetle also can fly short distances, approximately 2 to 5 miles.

The next window for preventive treatment measures (trunk injection, soil injection, soil drench, or basal trunk sprays) will open early spring 2015 (mid-April to mid-May). If a landowner is interested in protecting a valuable and healthy ash tree within 15 miles of a known infestation, they should use the winter months to have landscape and tree service companies bid on work, and these bids can be reviewed before next spring.

Please contact Iowa EAB Team members to have suspicious looking trees checked in counties not currently known to be infested. The State of Iowa will continue to track the movement of EAB on a county-by-county basis. Before a county can be officially recognized as infested, proof of a reproducing population is needed and an EAB specimen must be collected and verified by USDA entomologists.