Piecing together a faux Bohemian kroj 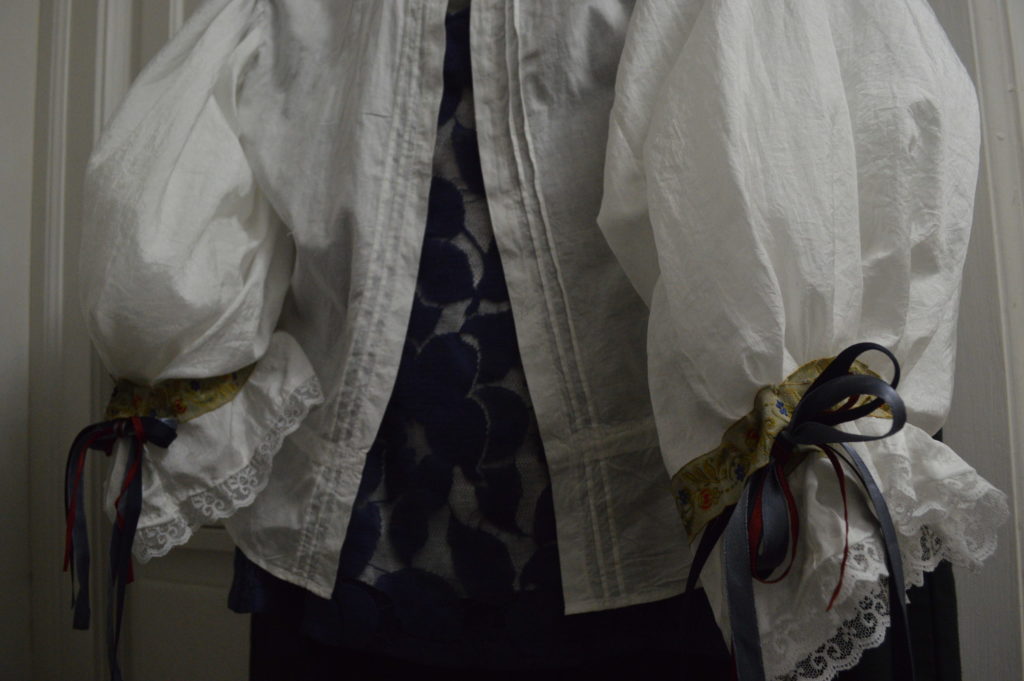 Hand-stitched sleeves are shown on what was a partially finished blouse, now intended to be used as part of a Czech folk costume. (photo/Cindy Hadish)

Buying a kroj wasn’t on my radar when I visited the Czech Republic several years ago. 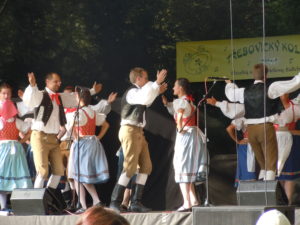 Dancers wear traditional folk costumes during a festival in Ostrava, in the Czech Republic. (photo/Cindy Hadish)

The traditional folk costumes, with elaborate designs worn in years past for weddings and other celebrations, are now uncommon in the Czech Republic and Slovakia, outside of dance troupes or folk festivals.

Being involved in Czech-American organizations, we’re occasionally in need of dressing the part, and several members of the Czech Heritage Foundation and the National Czech & Slovak Museum & Library in Cedar Rapids have authentic or handmade kroje (plural form of the Czech word) worn for Houby Days or other events.

Folk costumes are ubiquitous at the Wilber Czech Festival in Nebraska and closer to home, Miss Czech-Slovak Iowa contestants model kroje during the annual pageant in Cedar Rapids in May, while members of the Czech Royal Court also wear kroje during their appearances in parades and elsewhere in the area. 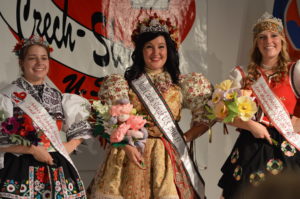 Ashley Pudil, left, of Iowa, Michaela Steager of Nebraska and Anna O’Renick of Missouri are shown in kroje during the 2016 Miss Czech-Slovak U.S. pageant in Wilber, Neb. (photo/Cindy Hadish)

Kroje in the “old country” had ties to hometowns or regions. You could tell where someone was from by the embroidery in their sleeves, for example.

Ideally, Czech Americans would wear kroje from the hometown of their ancestors; either a new “Americanized” version or vintage costumes, which can be expensive and aren’t necessarily easy to find.

So, it might be best that I didn’t go on a kroje quest when on my trip, but I managed to cobble together a pseudo-kroj with a scarf I bought in Prague, a vintage apron purchased at Czech Village Antiques in Cedar Rapids, and a dark skirt, blouse and boots.

Then I stumbled across a red skirt at a sale. 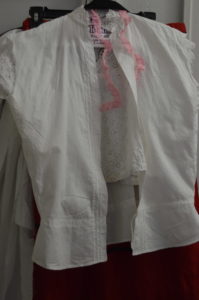 This blouse, with no sleeves, looked to be an unfinished sewing project. (photo/Cindy Hadish)

I had no need for a red skirt, but it fit perfectly and appeared to have been part of a costume at some point in time, so the orphaned piece came home with me and has been hidden away in a closet ever since.

Until a few weekends ago, when I found pieces at an estate sale that looked like they might have a Bohemian influence: a lacy shirt with no sleeves that seemed to be an unfinished project; an almost sheer piece of fabric that, again, was likely a sewing project left undone, and bits and pieces of ribbon.

Stashes of lace and a black scarf that I already had at home were fashioned into a collar, white fabric I bought during my days as a color guard instructor for a never-made flag were turned into sleeves for the sleeveless blouse and the sash of a gown bought at another estate sale became a head scarf.

I don’t embroider, and really don’t even sew, so the sleeves remain simple, as do the rest of the pieces of my faux kroj.

Given my limited sewing skills, the real test will come during upcoming events, where I hope the stitches will hold. If not, I have my fall-back pseudo-kroj, and maybe someday, I’ll make it back to the Czech Republic for a true kroje quest. 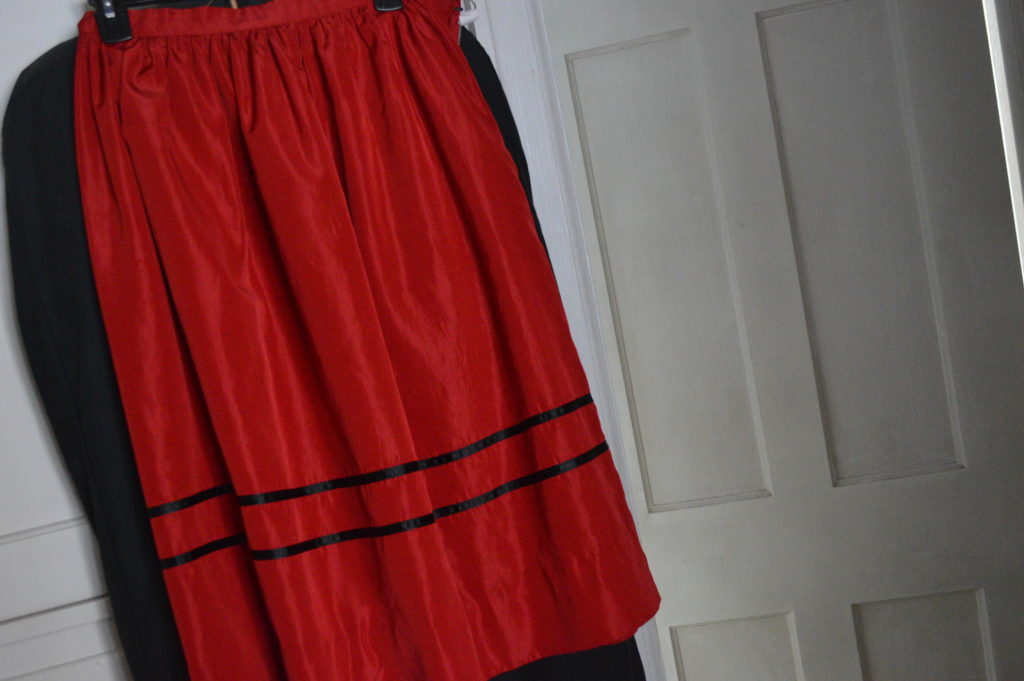 This red skirt, purchased at a sale, looked like it had been part of a costume. (photo/Cindy Hadish) 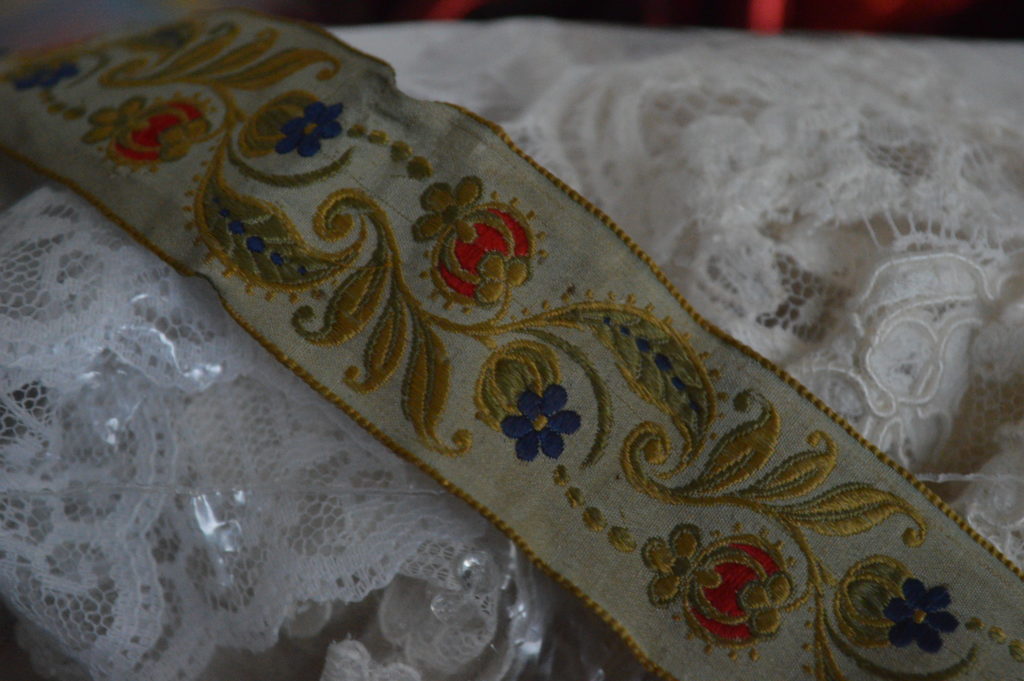 Embroidered ribbon was found at an estate sale. (photo/Cindy Hadish) 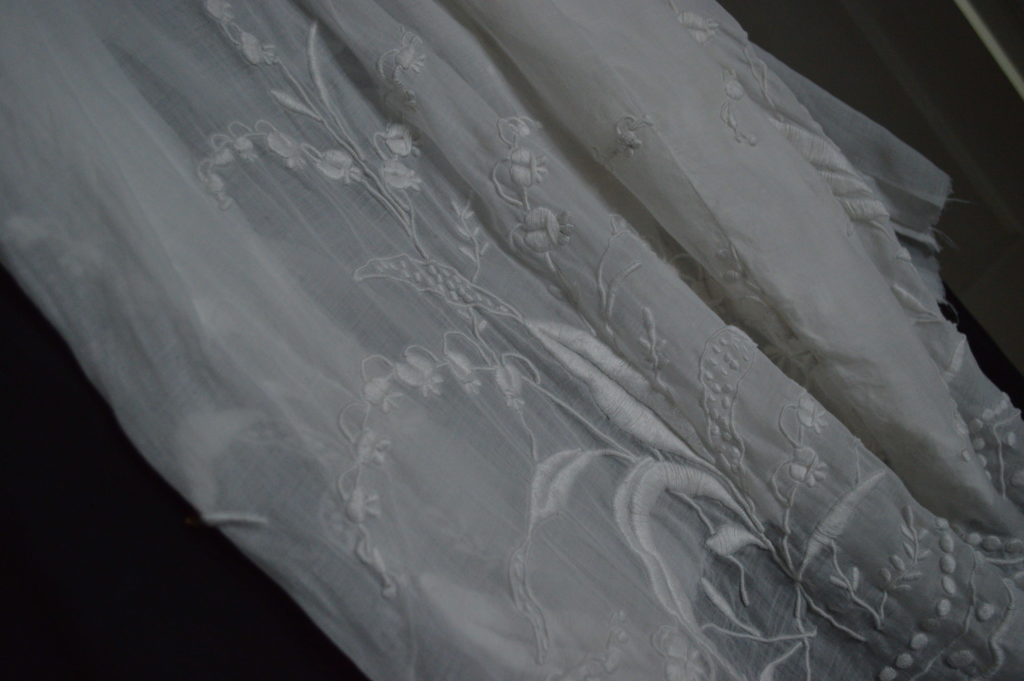 Sheer fabric with a floral design, purchased at an estate sale, will be used as an apron. (photo/Cindy Hadish) 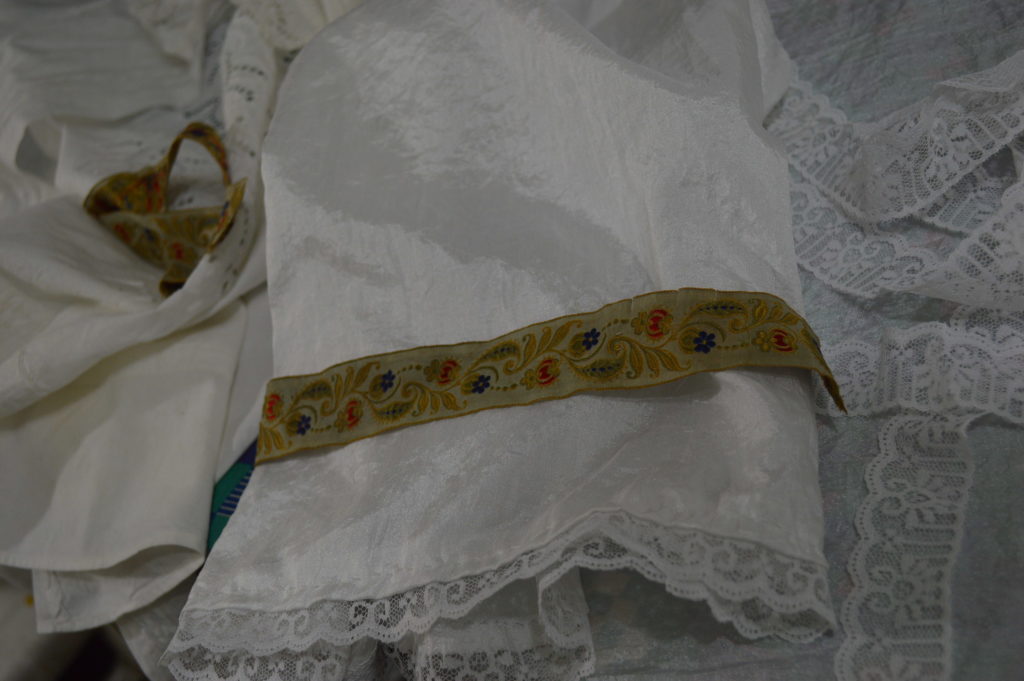 Lace was stitched to the bottom of the sleeve, made from white fabric, with ribbon added as an accent. (photo/Cindy Hadish) 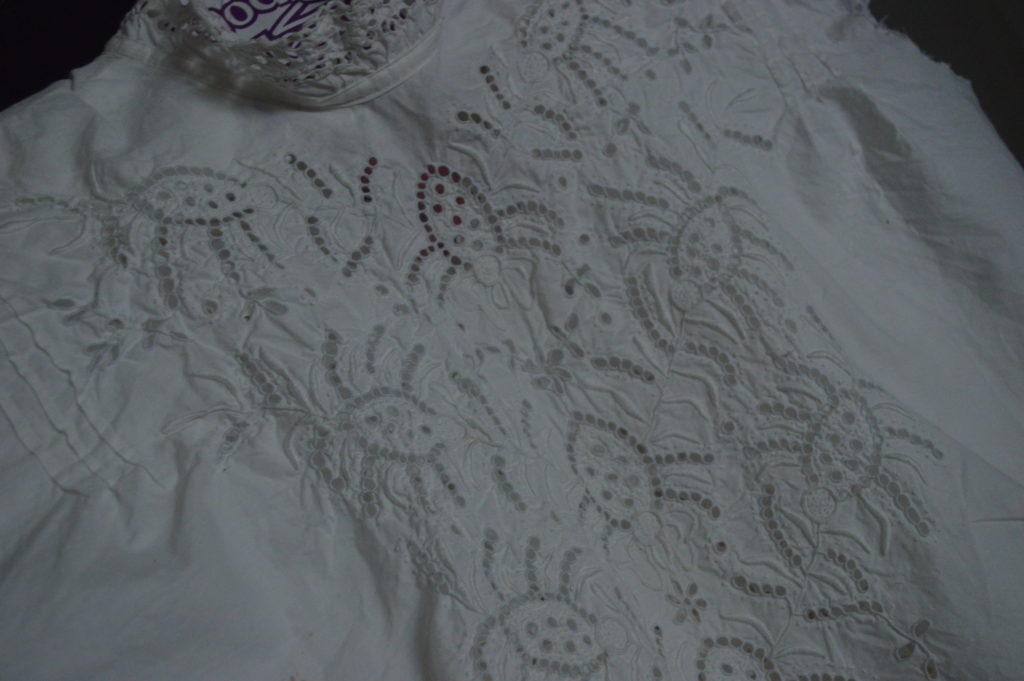 The backside of the sleeveless blouse, or perhaps the front. (photo/Cindy Hadish) 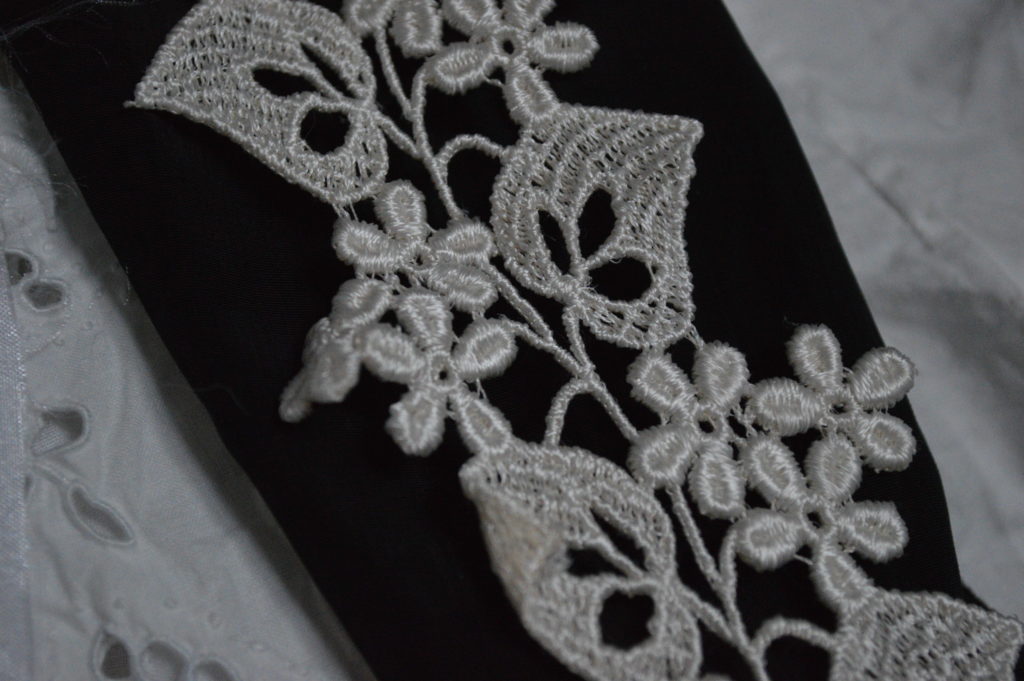 Lace was stitched on a black scarf to fashion a collar. (photo/Cindy Hadish)