Pipeline opponent to speak at Prairiewoods in Hiawatha 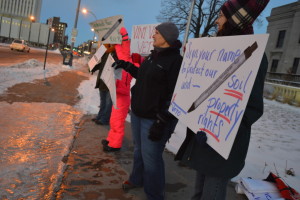 Opponents of the Keystone XL and Bakken pipelines hold signs in January 2015, on the Third Avenue Bridge in downtown Cedar Rapids. Pipeline opponent Ed Fallon will speak at Prairiewoods in Hiawatha on May 20. (photo/Cindy Hadish)

Glad to hear that activist Ed Fallon bonded out of jail today, as he is scheduled to visit Prairiewoods in Hiawatha this Wednesday, May 20, to discuss his 400-mile walk across Iowa.

Fallon, a former Iowa legislator, was arrested and charged with trespassing May 18, after refusing to leave Iowa Gov. Terry Branstad’s office, where he sought a meeting to discuss the proposed Bakken Pipeline.

The pipeline would cut through Iowa to carry oil from North Dakota to Illinois.

Fallon will discuss his efforts from 6:30-8 p.m. Wednesday at Prairiewoods, 120 E. Boyson Rd., Hiawatha. “Walking the Line: Memoirs on Oil, Land and People” will include discussion of the proposed Bakken Oil Pipeline.

Fallon also will talk about his experience on the Great March for Climate Action and his 400-mile walk across Iowa.

The walk, along the path of the proposed Bakken Oil Pipeline, included conversations with landowners who don’t want their land taken by eminent domain—an area of law Fallon worked on extensively as a state lawmaker.

Before his arrest, Fallon issued this news release:

Today at 1:30 p.m., former Iowa lawmaker Ed Fallon entered Governor Branstad’s office at the Iowa State Capitol and asked to speak with the Governor regarding the eminent domain legislation that would help landowners along the path of the Bakken Oil Pipeline. Fallon informed the Governor’s staff that he would refuse to leave the office until Governor Branstad met with him in person or on the phone and agreed to help pass the bill.

“Historically, the Governor and I have supported strengthening Iowa’s eminent domain law to protect private property from private, for-profit development,” said Fallon as he sat waiting to speak with Branstad in the Governor’s office. “We also have both been critical of Big Oil, who the Governor has rightfully criticized for trying to weaken Iowa’s pioneering efforts in ethanol and biodiesel.”

Last month, Fallon completed a 400-mile walk across Iowa, following the path of the proposed pipeline and meeting with landowners. Every day of the 40-day walk, he blogged about the experience and shared stories of the people he met along the way.

“The Governor needs to hear the stories of some of the hundreds of Iowa landowners who are adamantly opposed to having their land taken for this pipeline,” continued Fallon. “I believe that when their voices have a chance to touch his heart, he will agree to help move the eminent domain bill forward in the final days of this year’s legislative session.”

At Prairiewoods, Fallon also will discuss the urgency of the climate crisis, the need to protect our water and other issues surrounding the oil pipeline. A free-will offering will be accepted at the door.

Other events coming up in the area include these:

May 18 – Bill McKibben at Grinnell College (Grinnell)
Bill McKibben will speak during the commencement ceremony at 10:00 a.m. at the amphitheater on central campus. (In the event of inclement weather, the ceremony will be held in the Charles Benson Bear ’39 Recreation and Athletic Center, 1201 10th Ave.) Free admission. The event also will be live streamed on Grinnell’s website.

May 31 – Presentation (Cedar Rapids)
Ed Fallon speaks about his recent walk across Iowa along the proposed path of the Bakken Oil Pipeline, and about last year’s Great March for Climate Action across the U.S. It’s at 11:00 a.m. at the Peoples Church Unitarian Universalist, 4980 Gordon Ave NW. Contact Carol Berg at carol.v.berg@gmail.com.

May 31 – Ames Progressive Alliance Picnic (Ames)
From 4:00-6:00 p.m at Brookside Park Maple Shelter, a celebration of how amazing Ames will be when progressives work together. Bring a savory or sweet side dish and your choice of beverage. Enjoy live music and great networking. Contact Matthew Goodman at mg@fightingburrito.com.

June 6 – Tar Sands Resistance March & Rally (St. Paul, MN)
Meet at 12:00 p.m. at Lambert’s Landing to march and rally at the State Capitol Lawn, 75 Rev. Dr. Martin Luther King Jr. Boulevard. Big Oil and companies like Enbridge are trying to build and expand an enormous network of tar sands pipelines from Canada into the Midwest. These tar sands pipelines, along with crude oil trains and tankers, pose a growing risk to the Great Lakes, our rivers, our communities, and our climate. Click here for more information.