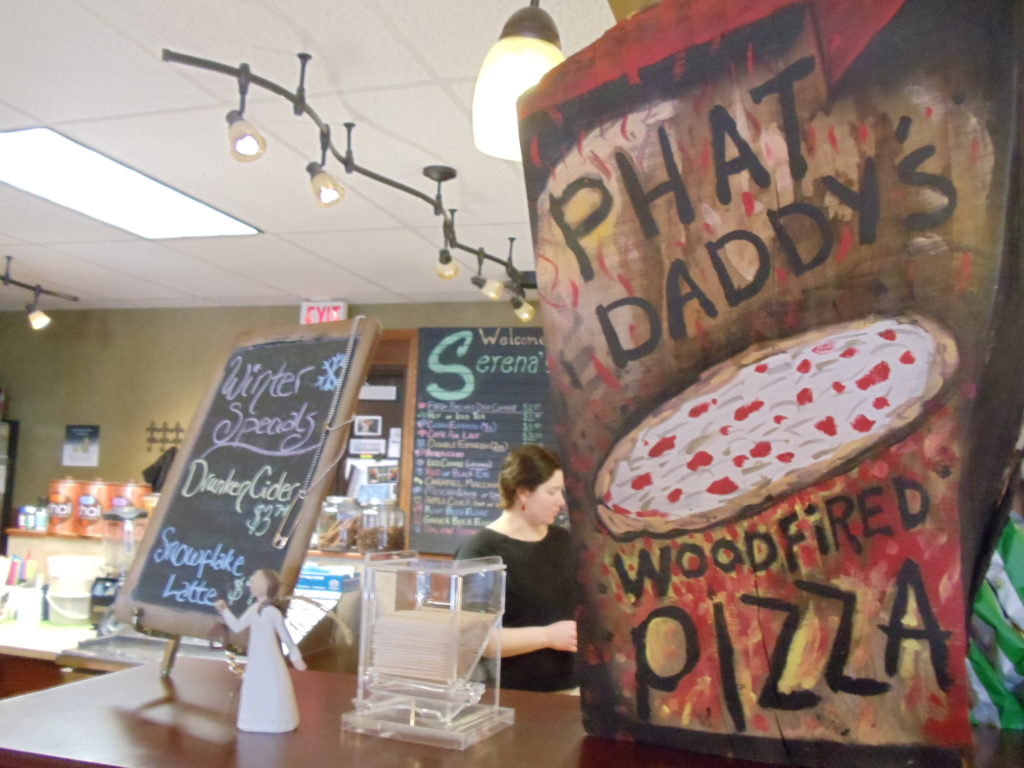 Serena’s Coffee Shop and P.H.A.T. Daddy’s are both located in the former Brick Haus restaurant in Amana. (photo/Cindy Hadish)

Two separate businesses operate in harmony under the same roof in Amana. Serena’s Coffee Shop and P.H.A.T. Daddy’s are both located in the former Brick Haus restaurant at 728 47th Ave. Rather than compete, the two complement one another, with Serena’s focus as a full-service coffee bar and P.H.A.T. Daddy’s providing wood-fired pizzas, sandwiches and homemade soups, in addition to full catering services.

“We get along really well and it is a nice combination,” said Deb Heitmann, who owns and operates Serena’s with the help of her husband, Ron, and daughter, Elise. Heitmann is entering her sixth year this month at Serena’s, which she named after a great-aunt, noting “I wanted a name that sounded calm.” Customers can find that calm seated with their favorite cappuccino or other drink on plush couches in the lounge, tables in the combined indoor seating, or, in good weather, on patio seating outdoors.

Chef and owner Mike Curry was well-known at his Marengo restaurant and catering business before moving P.H.A.T. Daddy’s to Amana at the urging of Yana Cutler, who owns the former Brick Haus building with her husband, David. “It was the best move I’ve ever made in my life,” Curry said of his decision to open in Amana, nearly three years ago.

Our table sampled a variety of customer favorites, including three types of pizza. All are baked to perfection in the brick oven, heated with white oak and hickory harvested locally in the Amana Colonies. The Bacon Mac n’ Cheese, with mozzarella, house mac n’ cheese, cheddar, smoked bacon and a dash of alfredo sauce, is a particular favorite of younger customers, Curry said, though “a lot of adults like it, too,” including our table.

The Classic Supreme pizza, with house red sauce, mozzarella, sausage, pepperoni, mushroom, bell pepper, onion and black olives, received high marks in our group, as well, even with diners who aren’t necessarily veggie fans. All of the pizzas have a delicate, thin crust with dough hand-made by Curry’s mother, Carol, who also bakes desserts for both Serena’s and P.H.A.T. Daddy’s, including cheesecakes, Key lime pie and an Amana favorite, “Death by Chocolate,” which tastes as decadent as it sounds.

My favorite pizza was the Smoked Pork Hawaiian, which combines hickory-smoked pork, mozzarella, cheddar, onion, pineapple and the key ingredient: a delectable raspberry BBQ sauce that is a popular product on its own at P.H.A.T. Daddy’s. The raspberry sauce offers a tangy freshness to the pizza, while not overpowering the other ingredients.

That sauce is used, as well, in a sandwich that was also well-received at our table. The P.H.A.T. Pig features Swiss and cheddar cheese with smoked pulled pork on thick grilled bread. In all of its forms – in the sandwiches and pizzas – the pork was moist and meaty. We also tried the French dip, which was equally as tasty, with bread that holds up well to the au jus. A salad featured a variety of greens, with crisp cucumbers, tomatoes and carrots. “We use fresh ingredients; we try to keep as much local as possible,” Curry said, noting that even the sausage is hand-made with special seasonings. “I take pride in that.”

Tables of families enjoyed lunch when we visited, and Curry said children are welcome. Parents likely enjoy the quick service; the pizzas take just 90 seconds to bake in the 750-degree oven. Jars of hot sauce, smokehouse rub, pepper jelly and other house-made sauces are available for sale, along with handmade noodles and other food-related items.

Heitmann said about half of her customers are locals and the other half tourists, with traffic picking up during summer months, when the outdoor patio is particularly appreciated. Visitors stop in for fresh-brewed drip coffee, hot or iced tea, apple cider, hot chocolate, and an extensive list of lattes, fruit smoothies, frappes and other drinks.

We were treated to the caramel macchiato, one of the most popular on Serena’s menu for good reason, with its multiple layers of smooth warmth. Rich espresso is poured over steamed milk, topped by creamy foam with a sweet drizzle of caramel on top. The mocha frappe, an iced espresso thick with whipped cream and a malt-like consistency, is perfect for chocolate fans, while seasonal favorites, such as the “Drunken Cider” and “Snowflake Latte” are available during limited times. Chai latte also is popular. Heitmann said customers appreciate the extensive list of flavors at Serena’s, while many pick up a bag of small-batch roasted coffee available from Iowa Coffee Roasters.

Serena’s and P.H.A.T. Daddy’s are both closed on Mondays and will be closed Jan. 22 to Feb. 9, 2017, following Amana Winterfest on Jan. 21. Serena’s also is closed on Sundays in January and February, and open 8 a.m. to 4 p.m. Tuesday through Thursday, and 8 a.m. to 5 p.m. Friday and Saturday. Find more on Serena’s Facebook page and the Amana Colonies website: www.amanacolonies.com