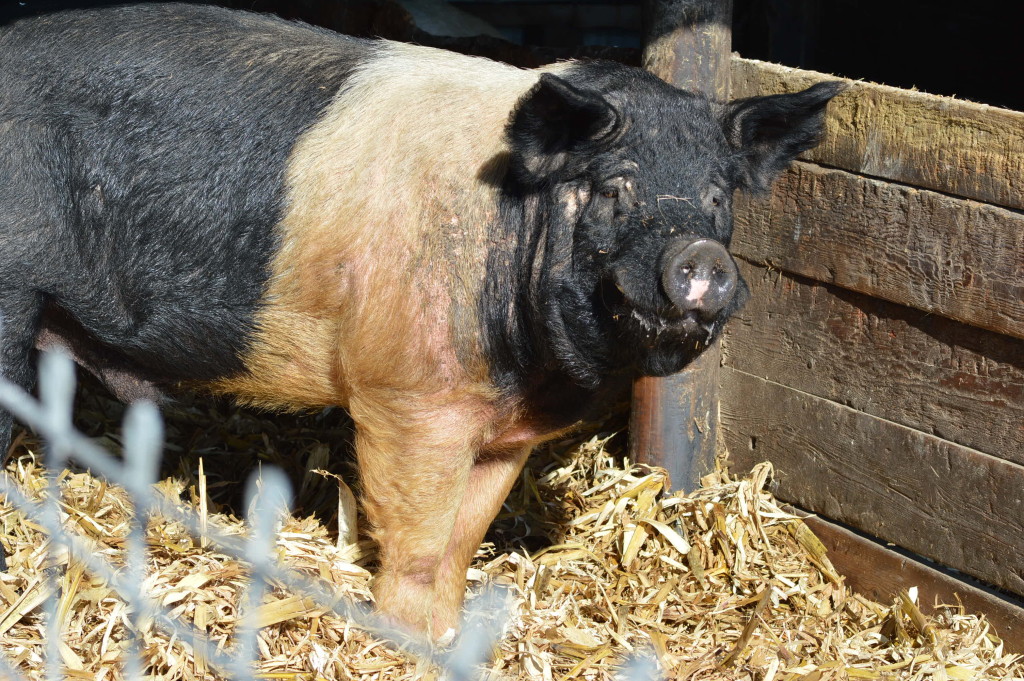 Denny and Lea Rehberg have added a decidedly coastal flavor to their Midwestern farm.

Rehberg’s Pork is well-known at Iowa farmers markets for its bacon, ham, sausage and other purebred Hampshire hog products, but the farm is poised to make a name with its shrimp, as well.

The Rehbergs are among just a handful of Iowa farmers who have dived into indoor shrimp operations. Thousands of the crustaceans live in a former hog building that was repurposed to house the tanks where the shrimp are raised in rural Walker, Iowa. 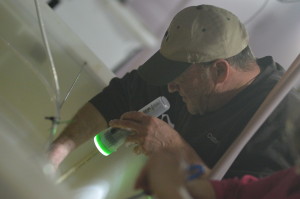 “We thought it was a good fit with our antibiotic-free, naturally raised pork, because the shrimp are raised antibiotic-free, too,” said Denny Rehberg, who grew up just one mile north of the farm where the Rehbergs now live.

He farms 160 acres of non-GMO grain used to feed the Hampshire hogs, a private purebred herd considered to be “heirloom pork.”

The black pigs, with distinctive white bands around the front of their bodies, have some of the oldest genetics in the Hampshire breed, with the pork’s taste a big selling point to the Rehbergs’ loyal customers. Unlike the majority of Iowa hogs that spend their lives in large-scale confinement units, the Rehbergs’ hogs are raised unconfined, with plenty of room to roam in the fresh air.

While the feeding and other chores associated with raising hogs is hard work, the couple say it’s no comparison to the labor-intensive shrimp operation.

Ten-day post-larva shrimp, each just the size of a pin head, are shipped from the Florida Keys to Iowa, where they are transferred to saltwater in two “nursery” tanks in the shrimp building.

Lea is in charge of the meticulous job of water quality testing, which includes measuring dissolved oxygen, temperature, salinity, nitrates, ammonia and more.

“Everything affects the shrimp,” she said, noting that even barometric pressure can play a role in whether or not the shrimp thrive.

The Rehbergs use a biological filtration system with natural bacteria that “eats” the waste in the water. The only water added in the zero-exchange system happens when needed due to evaporation. 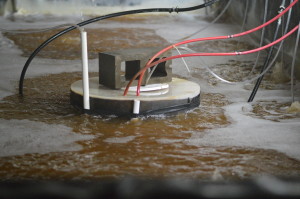 Water is kept at a balmy 80 degrees, giving the Rehbergs’ shrimp operation a tropical feel, even on a cold winter’s day. (photo/Cindy Hadish)

“Everything mimics what the sea does,” Denny said.

As they grow, the shrimp are moved into various tanks in the lower level of the building, where the water is kept at a balmy 80 degrees, giving the operation a tropical feel, even on a cold winter’s day.

Three times each day, the shrimp are given pelleted feed from Zeigler Brothers in Pennsylvania, known for its high quality aquaculture products. Aquaculture, as the Rehbergs and other farmers are exploring, is a fast-growing food sector, as solutions are devised to meet the world’s growing protein demand.

“It’s just a way to stay outside the box and be diversified,” Denny said. “What’s the best thing people like to eat? It’s shrimp.”

Investigations in recent years have pointed to numerous issues surrounding imported shrimp, including filthy conditions and contamination with banned chemicals, such as the antibiotic, chloramphenicol, which has been linked to cancer, as well as slave labor used in the “peeling sheds” of shrimp farms in Asia, where much of the United States’ shrimp originates.

The Rehbergs said they wanted to offer an alternative and began their shrimp operation last year, selling small amounts of shrimp from their farm and special order to some of their regular customers. The shrimp take about four months to reach market size and are placed on ice, with heads on, before being sold. 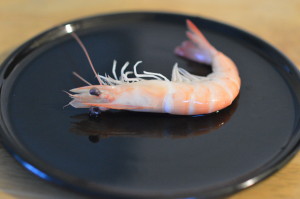 Customers have compared the taste and texture of Rehberg’s shrimp to crab legs and lobster. (photo/Cindy Hadish)

Lea said customers have compared the taste and texture to crab legs and lobster, and while the Rehbergs have experimented with recipes, such as bacon-wrapped shrimp on the grill, simply boiling the shrimp for just a minute or two is an easy way to enjoy them.

“If you can boil water, you can cook shrimp,” Denny said.

The Rehbergs plan to sell the shrimp alongside their pork products at farmers markets in Hiawatha, Iowa City, Marion and downtown Cedar Rapids this season, but the shrimp will likely need to be pre-ordered, as they are sold fresh.

At this point, they prefer to sell directly to customers, rather than retail outlets or restaurants. They also recently began selling the shrimp through the Iowa Valley Food Co-op, where customers order online and pick up the products at distribution points in Cedar Rapids and Iowa City.

“I like to see the connection between the consumer and the farmer; people today are so removed from that,” Denny said, adding that farmers market and co-op customers understand and appreciate that connection. “It’s honest food.”

Find more at: rehbergspork.com or on Facebook at Rehberg’s Pork & Shrimp. 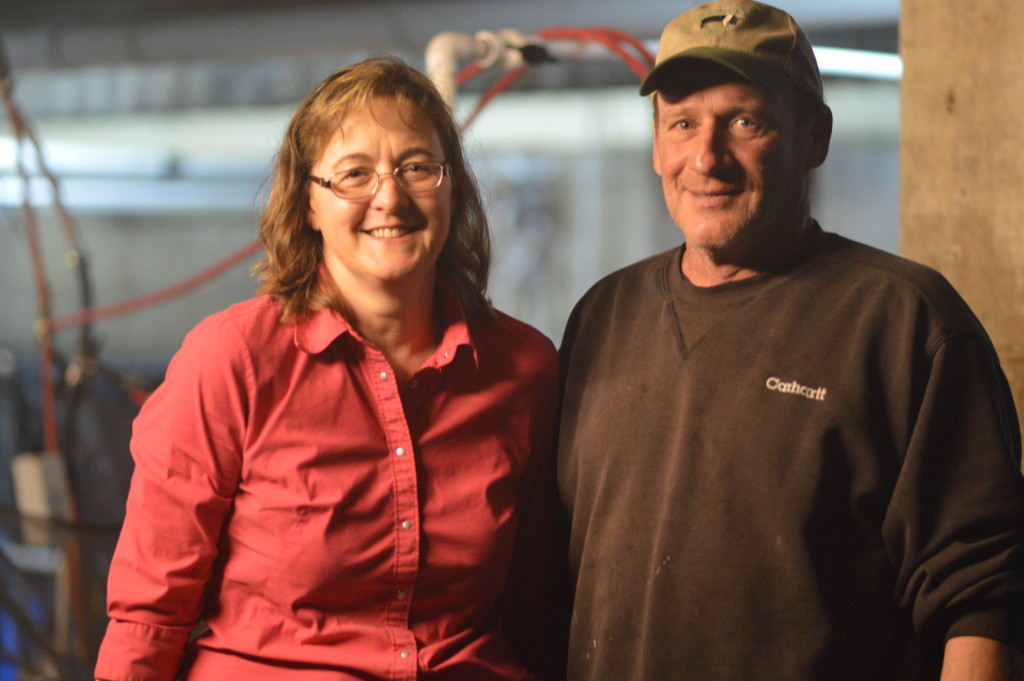 Lea and Denny Rehberg are shown inside their shrimp operation in a converted hog building in rural Walker, Iowa. (photo/Cindy Hadish) 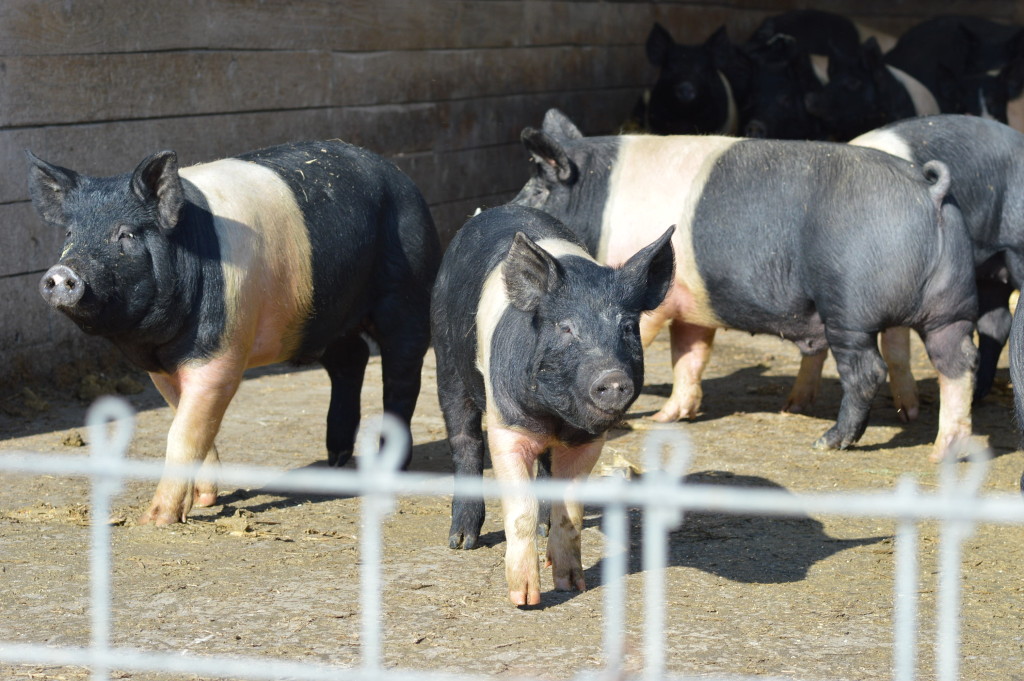 The Rehbergs’ black pigs, with distinctive white bands around the front of their bodies, have some of the oldest genetics in the Hampshire breed. (photo/Cindy Hadish) 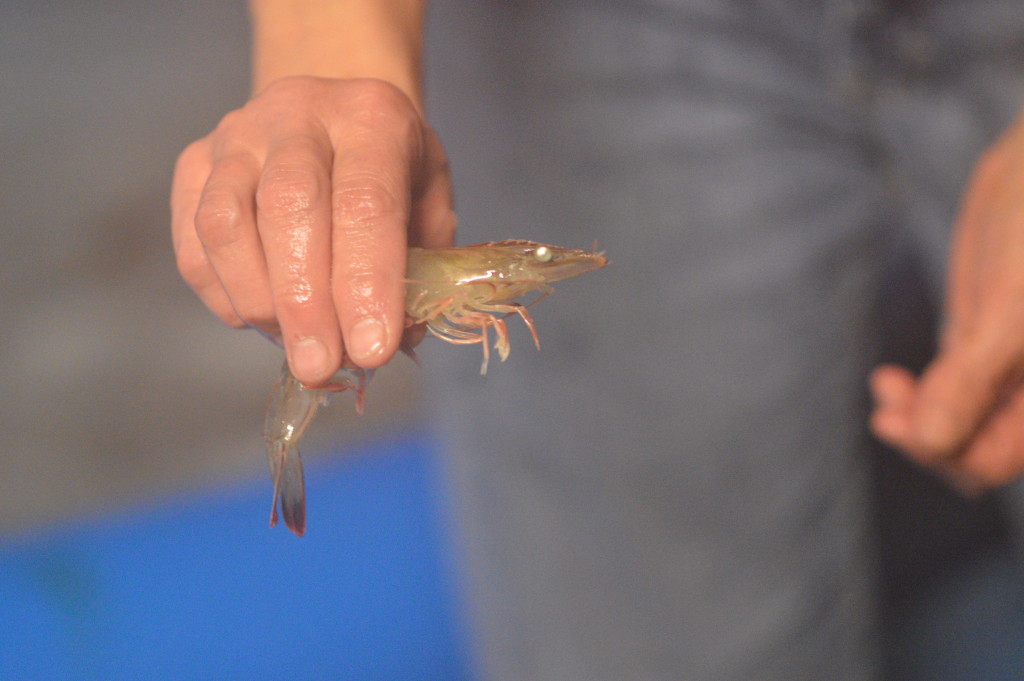 The Rehbergs’ shrimp take about four months to reach market size and are placed on ice, with heads on, before being sold. (photo/Cindy Hadish) 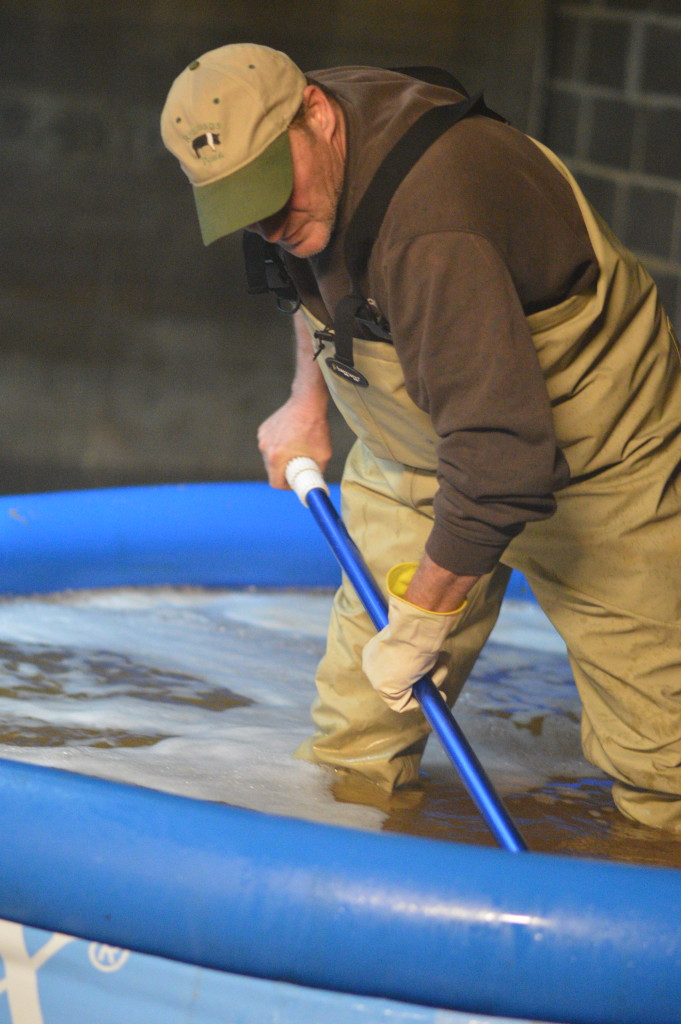 Denny Rehberg uses a net to catch shrimp in one of the tanks at the Rehbergs’ indoor shrimp operation in Iowa. (photo/Cindy Hadish)