Preparing for the big freeze in Iowa 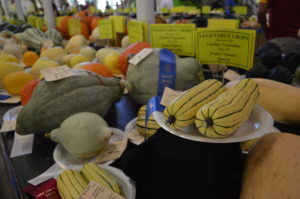 Winter squash, shown at the 2016 Iowa State Fair, generally can survive a frost, but summer squash should be harvested before the first frost or freeze. (photo/Cindy Hadish)

The National Weather Service notes that temperatures will drop to between 26 and 32 degrees over most of the state, including Linn, Johnson and Winneshiek counties, while frost is expected in southeastern counties, such as Scott, Washington and Clinton counties.

In either case, gardeners should prepare for the cold temperatures by harvesting, moving or covering their plants.

Tender vegetables, such as tomatoes, peppers, beans and summer squash should be harvested now. Green tomatoes can ripen over time on your counter; do not refrigerate.

As temperatures are predicted to return to the 70s, gardeners also can choose to cover their plants overnight – bed sheets work well – or move potted plants to a garage or enclosed porch. Remove the covers during daytime hours. The same is true of flowers that are at risk from the frost. Iowa looks to have at least another week of pleasant temperatures, so it can be worth the trouble to move or cover the plants you’d like to save.

The Vegetable Gardener offers a nice chart on which produce is at risk and which tolerate a frost.