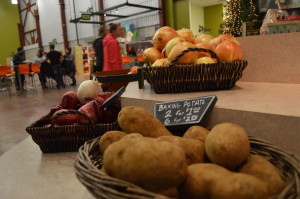 CEDAR RAPIDS – One of the most visible vendors at NewBo City Market is closing its market booth.

Morgan Creek Produce Market will end its run at NewBo on Jan. 1, 2014, said Bill and Robyn Rieckhoff, who operate the stand with Robyn’s father, Bob Vanous. Because the market is only open on Thursdays, Saturdays and Sundays, that means the last chance to shop at the stand was this weekend.

The couple cited the logistics of operating Morgan Creek’s produce stand on Highway 30 along with the NewBo booth in Cedar Rapids, as well as the time commitment in maintaining both operations.

Morgan Creek will continue to offer tomatoes, melons and other fresh produce at its stand west of Cedar Rapids from May through October, and will be a seasonal vendor at NewBo and other farmers markets.

“It’s bittersweet, but it’s the right thing to do,” Bill Rieckhoff said.

The farm also supplies fresh produce to area schools and restaurants and the Iowa Valley Food Co-op, said Robyn Rieckhoff, who stays busy with her duties as Freedom Festival executive director, in addition to Morgan Creek.

Morgan Creek is one of the first booths that visitors see coming in the main entrance of the NewBo City Market, 1100 Third St. SE, which celebrated its first anniversary in October. It’s also the only permanent vendor that sells fresh produce.

The Rieckhoffs’ children, Sydney and Carter, will continue to operate their own market booths, The Chill and CR Popcorn.

Kristie Wetjen, market executive director, and operations director Wendy Zimmermann, said the market is nearing an agreement with another vendor who will fill the prominent space left by Morgan Creek.

Both said they would like another produce vendor, but cited the challenges of offering Iowa-grown fruits and vegetables year-round. Some of what Morgan Creek sells is shipped in from out-of-state, so market-goers can buy a variety of produce that doesn’t grow in Iowa winters.