Ready for the big freeze? Five ways to prepare your garden 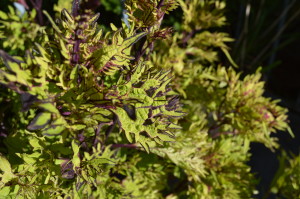 Before the first frost, take cuttings of coleus and other plants you’d like to root indoors. (photo/Cindy Hadish)

We shouldn’t be surprised that in mid-to-late October, we have a frost warning in Iowa.

Normally, we would have seen at least a light frost by now, if not already a killing freeze.

In fact, this map from The Weather Channel shows that Iowa is already past the average date of the first freeze.

Here are five ways to prepare your garden for the frost, and the big freeze:

1) If you haven’t picked your cucumbers, melons, zucchini  and other tender produce, today – Oct. 19 – is the day. Eastern Iowa is predicted to dip below 32 degrees tonight, even if just barely.  Hardy plants, such as kale, and root vegetables, like carrots and beets, should  survive the frost, though you won’t see a great amount of growth during the cold weather. I’ve covered my kale and Swiss chard in the past, but they seem to do OK either covered (and uncovered during sunny days) or not.

2) You could move potted plants into a garage or enclosed porch and cover any outdoor plants you’d like to save a bit longer, but the extended forecast calls for even lower temperatures, so it might be best to bite the bullet and take care of those end-of-year chores now. At least it’s the weekend. If you do want to cover your outdoor plants, a light sheet that you no longer need works great.

3) Take cuttings of plants, such as coleus, that you would like to root over the winter. Last year, I took cuttings of mint plants that I used in my tea to add a fresh taste during the coldest months of the year.

4) Bring houseplants indoors. I have several dozen that spend the summer on my back porch. Check for accidental hitch-hikers; I’ve watched a spider create an elaborate tunnel off of one of my plants that I’ve left alone, so far. Outside, I’m OK with spiders. Bringing it indoors is another matter. Another set of plants, such as my calla lilies, die back and spend the winter in the basement. I love these plants. They require no wintertime care and regrow when the time is right every spring. 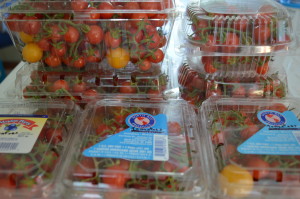 Even green tomatoes will ripen if picked before the first frost and stored, unrefrigerated. (photo/Cindy Hadish)

5) One thing I advise every fall, which is an extension of tip #1, is to pick all the tomatoes that are still growing on your vines.  Some people wrap their tomatoes individually in newspaper, but mine seem to do fine in a plastic container. Even green tomatoes will eventually ripen if kept on your kitchen counter, providing that fresh taste through Thanksgiving, or even longer.