Seeds from Iowa sent to global vault in Norway 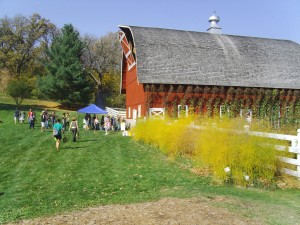 If you’ve never been to Heritage Farm at Seed Savers Exchange, you’re missing out on one of the gems of northeastern Iowa.

Set among the hills north of Decorah, the non-profit maintains and sells thousands of seed varieties for the benefit of gardeners around the globe.

Their reach extends into the future, as two more crates of seeds from Decorah have been sent to the remote location of the Svalbard Global Seed Vault in the country of Norway.

Read on for more about this amazing resource from our home state:

Decorah, IA.   As part of their preservation efforts, the Seed Savers Exchange (SSE) has been utilizing the Svalbard Global Seed Vault to back up their collections since the seed vault’s opening in 2008. Svalbard acts as a safety net for SSE and seed banks worldwide by housing duplicate accessions for long-term storage.

The sixth shipment from Seed Savers Exchange brings their total to 2,248 seed samples deposited in the remote seed vault.

To prepare the seeds for long-term storage, seeds are dried until they have approximately 5% moisture content, and are then heat sealed into air-tight packets. Once inside the vault, the packets will be kept at 0°F (-17°C) and will remain viable for a very long time. Similar to a safe deposit box at the bank, only Seed Savers Exchange has access to the materials deposited. This ‘Black Box’ agreement is made with each depositor, and ensures that only the depositor can access their own seeds in the vault.

The Svalbard seed vault was built deep into mountainous permafrost, which keeps the vault at below freezing temperatures even without a cooling system. Furthermore, its treacherous and remote location protects the vault from possible harm due to natural disasters or human powered calamities. This kind of protection ensures Seed Savers Exchanges’ seeds will be safe for many years to come.

“As one of 1400 seed banks in the world, Seed Savers Exchange is proud to deposit an additional 366 varieties in the Svalbard Global Seed Bank in Norway, bringing our total deposits to more than 2,000 varieties. The global seed bank, with 725,000 total deposits, represents man’s best efforts to ensure that today’s seed varieties are available for future generations.” – John Torgimson, Seed Savers Exchange president.

Located six miles north of Decorah, Iowa, Seed Savers Exchange is a non-profit membership organization dedicated to the preservation and distribution of heirloom seeds.  Seed Savers maintains a collection of thousands of open-pollinated varieties, making it one of the largest non-governmental seed banks in the United States.