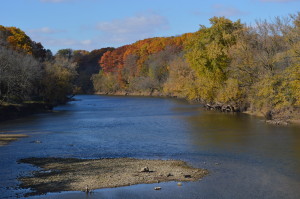 Manure spills can reach streams and other waterways that run to Iowa’s rivers. (photo/Cindy Hadish)

As new, large-scale hog confinement facilities are debated in Linn County, comes news from the Iowa Department of Natural Resources on one of the potential side effects of this type of operation.

Of note, the corporation involved in the manure spill, Maschhoff LLC, cites on its website the company’s environmental philosophy: “Our environmental team is focused on delivering responsible and progressive environmental management to the farm. This includes strategies to reduce odor, protect water resources and enrich the land.

“We’re also leading the industry in new environmental advancements. From participating in university studies to reduce phosphorus levels in manure to advancements in constructing environmentally sound buildings, we take pride in creating pork operations that are more environmentally friendly than ever.”

I know quite a few farmers; some more environmentally aware than others, and I know that accidents happen. This incident is just fodder for the debate. The DNR also provided a separate report on another spill – this one from an ADM plant in Clinton of more than a pound of mercury, a highly toxic element. Both reports are here:

MANURE RELEASED TO CREEK NEAR KEOSAUQUA

Keosauqua —On the morning of Nov. 4, facility maintenance staff discovered several thousand gallons of manure from Maschhoff LLC’s Keosauqua Sow Unit at 21392 Osage Avenue in Van Buren County had entered a creek on the property. The manure had traveled a quarter mile and was pooled before entering a neighbor’s pond. Site staff dug a pit in the creek on the Maschhoff property to stop the manure flow.

Maschhoff’s environmental staff arrived the afternoon of Nov. 5 and pumped manure from the creek to the lagoon and used a 300 gallon per minute pump to convey pond water to the creek to flush the manure.

The below ground manure trunk line to the lagoon was plugged and the added pressure of liquid manure drained from the sow building shallow pits over the weekend caused the manure to blow out through a clean out port and PVC break. It bubbled up from the ground and traveled to a creek that eventually discharges to the Des Moines River.

An inch of rain the night of Nov. 5 assisted cleanup efforts.

Creek pumping efforts continued Nov. 6 and ammonia levels in the creek continue to decrease. No dead fish were observed throughout the incident and manure recovery efforts.

The DNR will continue to monitor the situation and take appropriate enforcement action.

CLINTON — ADM corn processing of Clinton reported a pound plus mercury spill Nov. 6 on the ground and into the company’s 1400-ft. deep well in the Jordan aquifer.

A contractor was pulling a submersible pump from the well and the mercury seal in the pump broke. The pump where the seal broke holds 17.25 pounds of mercury.

Soil impacted by the mercury spill has been removed and soil testing is planned. Approximately over a pound of mercury has been recovered. The submersible motor is being shipped off to fix the motor and verify the amount of mercury remaining in the motor.

A specialized contractor in mercury recovery in wells has consulted with the company and has been hired to recover the mercury released into the well.

Mercury is a very toxic element that causes severe kidney and neurological health problems when consumed or inhaled by humans either directly or indirectly.

The DNR is monitoring the situation and will take appropriate enforcement action.