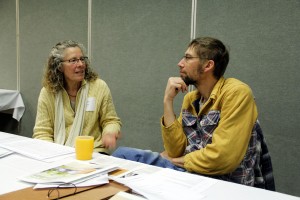 Susan Jutz, of ZJ Farm in Solon, was named the recipient of Practical Farmers of Iowa’s 2014 Sustainable Agriculture Achievement Award.

Practical Farmers’ Tamsyn Jones notes that the award has been granted annually since 1990 to someone who has shown exemplary commitment to sustainable agriculture, generously shared his or her knowledge with others and been influential in efforts to foster vibrant communities, diverse farms and healthful food.

The award will be presented to Susan at a dinner on Friday, Jan. 24, during the group’s annual conference, “Well Grounded,” in Ames.

Read about the conference, and here is more about the award from Practical Farmers of Iowa:

SOLON — Susan Jutz of Solon has been chosen as the recipient of the 2014 Sustainable Agriculture Achievement Award, granted annually by Practical Farmers of Iowa to someone who has shown exemplary commitment to sustainable agriculture, generously shared his or her knowledge with others and been influential in efforts to foster vibrant communities, diverse farms and healthful food. The award will be presented to Susan at a dinner on Friday, Jan. 24, during Practical Farmers’ 2014 Annual Conference, “Well Grounded,” in Ames.

Susan owns and operates ZJ Farm, an 80-acre diversified vegetable and sheep farm located between Iowa City and Cedar Rapids. In 1996, she co-founded Local Harvest CSA, a three-season Community Supported Agriculture program that was one of the first CSAs in Iowa, and which helped pave the way for this model of community-centered farming to take root and flourish in the state. Since then, Susan has been a principal partner and vegetable grower for the CSA, which now supplies more than 200 families with a wide variety of fresh vegetables and herbs grown using organic and sustainable practices.

“Susan has always been willing to share her expertise in farming with anyone,” says Dan Wilson, president of Practical Farmers’ board of directors. “Her commitment to making agriculture more sustainable is leaving an impact on Iowa’s agricultural landscape, and she is blazing a path for other women to follow.”

The board cited many examples of Susan’s commitment to sustainable agriculture and outreach. Besides serving as a past Practical Farmers board member and board president, Susan has shared her knowledge with the public at numerous field days and been a long-time participant in Practical Farmers’ Cooperators’ Program, a program rooted in the ethos of farmers finding independent solutions to on-farm challenges through on-farm research and demonstration projects – and then sharing that knowledge freely with other farmers.

Susan has also mentored several aspiring or beginning farmers over the years. Recently, she mentored beginning farmer Kate Edwards, owner of Wild Woods Farm, through PFI’s Savings Incentive Program. She and Kate are also partners, along with business entrepreneur Dick Schwab, in The Farming Institute, a summer training program designed to equip emerging farmers with in-depth and hands-on farming experience.

When notified that she was selected to receive this year’s Sustainable Agriculture Achievement Award, Susan says, “I was astonished. There are so many amazing farmers in Practical Farmers of Iowa that it’s a huge honor to be selected from among such excellent farmers who are striving hard to leave their land and communities in a better place.”

Part of Susan’s unwavering belief in sustainable models of agriculture stems from her vision of sustainability as an ongoing process, rather than a static goal with a firm endpoint. “To me, sustainable agriculture is like a dance with your community, with your land, with your environment, to adapt to the ever-changing world. Right now we’re dealing with a volatile climate, what worked for me 10 years ago isn’t working now. The only way I can be effective is to keep experimenting with ways to achieve a better balance.”

Susan credits her parents with instilling in her a love for the land and her ethic of stewarding it as sustainably as possible. She grew up on her family’s dairy farm near Gibbon, Minn., and recalls her father as being “an excellent farmer” who “really cared about the land.”

Before moving to Iowa in 1994, Susan first pursued and received a Master of Social Work from the University of Minnesota Duluth, and she worked in the field of social work before purchasing land in Iowa and starting ZJ Farm. Before settling on vegetable production as her main enterprise, she experimented with a range of other enterprises, from finishing hogs on contract to adding sheep, to a goat dairy that also produced goat cheese. Regardless of enterprise, Susan was always determined to be profitable while following sustainable practices. “We were only an 80-acre farm, but I was determined that we were going to make money on that farm.”

Susan will be presented the Sustainable Agriculture Achievement Award during the PFI Potluck Party, which runs from 7 p.m. to midnight, at the CPMI Event Center (2321 North Loop Drive) in Ames.

A complete list of past award recipients can be found below.

Founded in 1985, Practical Farmers of Iowa is an open, supportive and diverse organization of farmers and friends of farmers, advancing profitable, ecologically sound and community-enhancing approaches to agriculture through farmer-to-farmer exchange, farmer-led investigation and information sharing. Farmers in our network produce corn, soybeans, beef cattle, hay, fruits and vegetables, and more.  For additional information, call (515) 232-5661 or visit www.practicalfarmers.org.