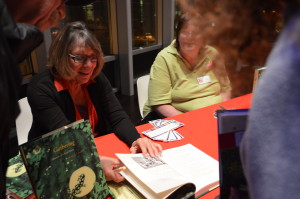 It was a true moment of serendipity.

A list of work that I needed to complete battled with wanting to hear Diane Ott Whealy, the co-founder of Seed Savers Exchange, speak at the Cedar Rapids Public Library, the last in a gardening series presented by the ISU Extension Linn County Master Gardeners.

Diane’s speech won and I am so grateful that it did.

I’m a big fan of the work done by Seed Savers and have visited the organization’s Heritage Farm in Decorah a few times.

Diane gave the history of how the idea for Seed Savers germinated,  with seeds and stories from her grandfather. Gorgeous photos of her garden, with many plants grown at Heritage Farm, were shown on the giant screen at the library.

When she started talking about watermelons grown in Chelsea, Iowa, I started feeling nostalgic for the melons my grandparents grew every summer on their farm near Chelsea. 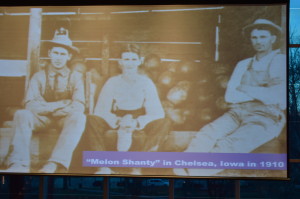 A photo of the Chelsea “melon shanty” was shown during the presentation by Diane Ott Whealy, co-founder of Seed Savers Exchange.

Diane mentioned Marvin Kucera, who donated the “Chelsea Watermelon” seeds to Seed Savers, and then she said something that gave me the chills.

Marvin had searched for someone who still had the melon seeds, she said, and finally was given some from an “old lady” in Chelsea: Elsie Musel.

My hand shot up. Elsie was my grandmother.

I had no idea that she had given the seeds to Marvin and that this incredible organization had continued growing them so they could be enjoyed by future generations.

It comes at a moment of irony, too, as our family has to sell off part of the wonderful farm where we shared all of those memories. Still, I’m so grateful that I had a chance to hear about grandma’s generosity and know that we have a connection to such an admirable nonprofit group.

I never thought of our grandmother as an “old lady,” as she had such a strong spirit. And now, it’s as if she is still reaching out, in her reassuring way, to let us know that her spirit, and that of our ancestors, survives.

My cousin, Judy Beuter, who has her own farm near Solon, shared her vivid memories of “grandma’s” melons: ” I remember LOTS of summer afternoons in the melon patch, hoeing with Grandma. Then, hot & sweaty, resting in the cool shade of the giant cottonwood near the gate & path that led down across the creek through the cattle pasture, and on up to the house. Do you remember saving seeds with Grandma? I do. If we ate an especially delicious melon, we all spit those seeds on to newspaper to dry. I am sure she went by size, shape, maturity, etc, but the biggest was if it tasted good, sweet! She taught us so much by her living! What a blessing she lives on in this way!”

Seed Savers Exchange is celebrating its 40th anniversary this year with special events. Hopefully, I’ll be able to make the trip to Decorah and I’ll be sure to buy some of the fabulous “Chelsea Watermelon” seeds to keep the connection growing. 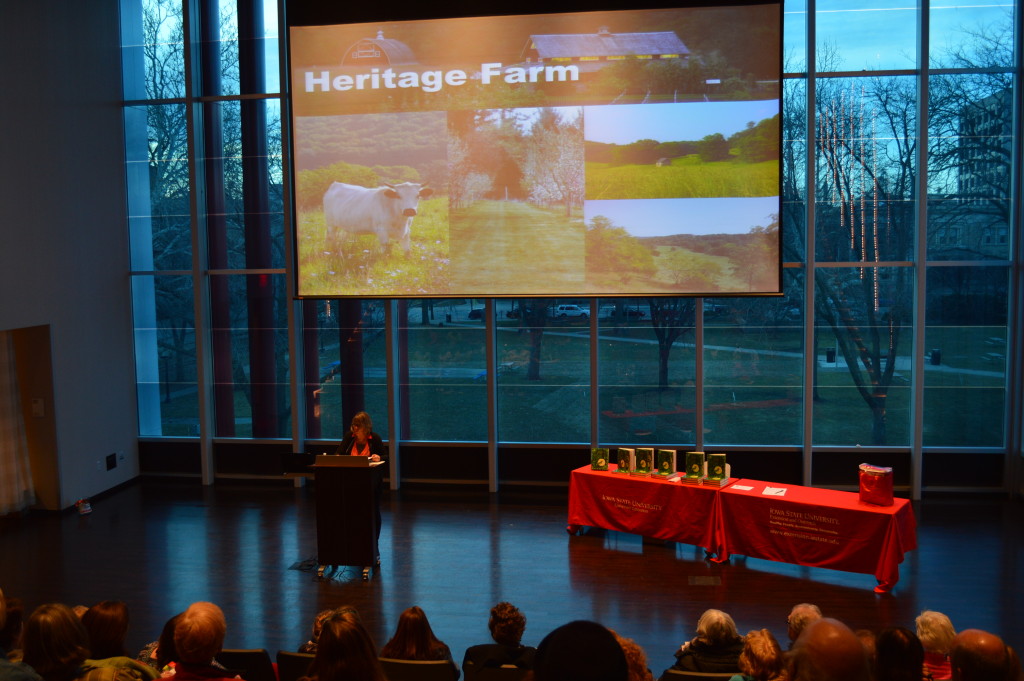