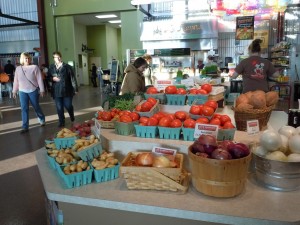 Customers walk past produce at the NewBo City Market in Cedar Rapids on March 7, 2013. The Springville market manager cited competition from new markets as a reason for closing on March 13, 2013. (photo/Cindy Hadish)

This news today really saddens me. The Springville Farmers Market has been one of my favorites for years. Market founder Lena Gilbert, shared the following message this morning, March 13, 2013:

The Summer market was established in June of 2006 and a short time later, the Winter market was established.  At one time the market boasted a dozen or more active, regularly participating weekly vendors but with the Farmers’ Market boom in our area, we’ve lost vendors and customers to other near-by markets including the recent online market co-op.

The Springville Farmers’ Market not only blazed the local trail in bringing the best produce, crafts and baked goods to the table but we also became an outlet for popular and emerging local entertainers.  Additionally, we took great pride in collaborating with other area markets to ensure market dates and times were designed to maximize customer and vendor availability.

We thank everyone for the many years of support;  whether as a grower, baker, crafter, shopper, volunteer, community partner, or musician, thank you for making the Springville Farmers’ Market a friendly place to shop and vend.

The Springville Economic Development Corporation will be evaluating other possibilities to reestablish a Springville Farmers’ Market, until then….

“May the food be with you!”