State official maintains he saw students, teachers in school when asbestos was “floating in the air” as school district claims “inaccuracies” in report 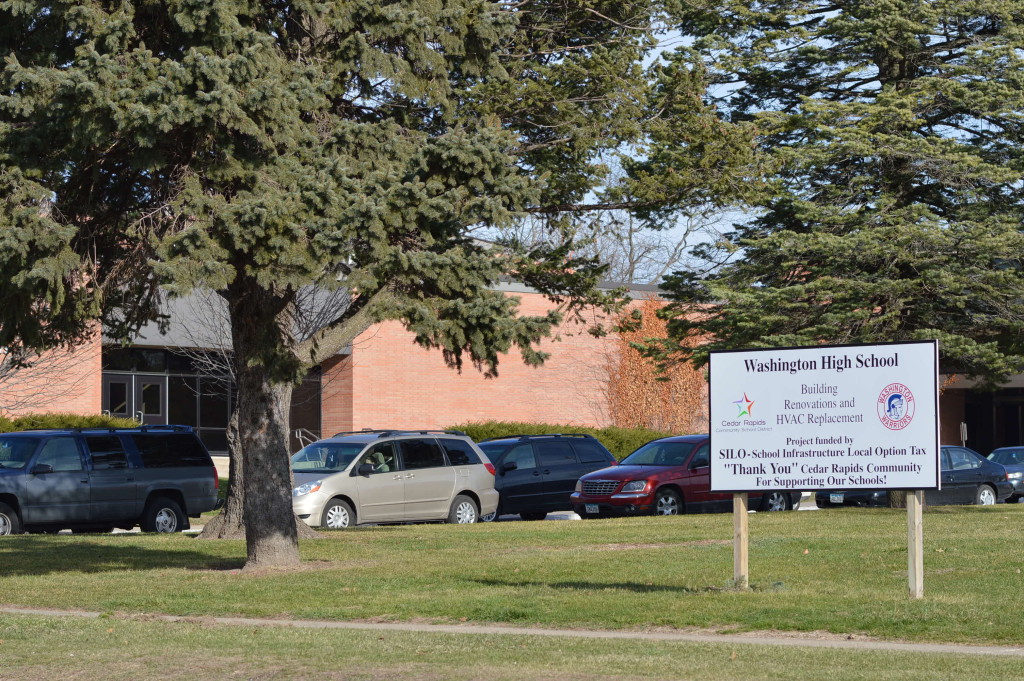 A sign outside of Washington High School notes the project that took place inside the school. The Iowa Department of Natural Resources is pursuing litigation in connection with asbestos removal during the project. (photo/Cindy Hadish)

Iowa’s top asbestos official stands by his observations of the asbestos removal at Washington High School, even as the Cedar Rapids School District tries to raise questions about the report.

Tom Wuehr said when he visited the school this summer in response to a complaint about asbestos removal during school renovations, he saw students playing basketball in the gym and teachers in the building, as well as contract workers.

“Asbestos was found floating in the air and not in restricted areas,” said Wuehr, who leads the Iowa Department of Natural Resources Asbestos Program. “It’s reasonable to say people were breathing that; whoever was in the building at the time.”

After news of the DNR litigation report was made public last week, families of Washington High School students received a note regarding the asbestos removal.

“It is important to note that this situation happened after students and staff had been dismissed for the summer break,” the note stated.

School district officials, however, have not responded to questions about the number of staff and students who may have been in the school during the summer.

Learn more about the litigation report.

Wuehr asked the district to close the school this summer after investigating complaints  lodged against the contractor removing asbestos as part of the renovation project.

Air quality tests, using sampling equipment that measures the amount of asbestos fibers in the air, showed elevated levels, even in areas that were not part of that work, he said.

The School District has responded to the DNR’s request to pursue litigation in the case by disputing several of the allegations. (Read full statement issued today at the end of this article.) District officials, however, have not answered questions about the accuracy of the school district’s own statements.

The School District’s initial response to the report on asbestos removal gives the impression that no one “tested positive” for asbestos from the school, but according to the Environmental Protection Agency and other experts, the statement is misleading.

“At this time the District has not been provided with any information indicating that any individual has tested positive for asbestos as a result of their presence at the job site,” the school district stated earlier this week.

The statement gives the impression that tests are available to show whether or not an individual had been exposed to asbestos and would “test positive” from that exposure. Problem is, no such test exists.

“I’m not aware of any tests,” said Wuehr, who has worked in the asbestos field for nearly two decades. “There’s really no way to know if you’ve been exposed or not.”

The risks from asbestos, a hazardous air pollutant, include lung disease and cancer, called mesothelioma, which can develop years after exposure. A human carcinogen, or cancer-causing agent, asbestos has been used in building materials including pipe insulation and ceiling and floor tiles, and numerous other purposes, such as in the brakes and clutches of cars.

Wuehr and other experts, including the Mesothelioma Cancer Alliance and the EPA, noted that tests, such as X-rays, can identify issues in the lungs, but not levels of asbestos fibers. Typically, Wuehr said, X-rays are used to monitor for scarring and other lung abnormalities over time.

“Those things take a long time to develop,” he said of asbestos-related diseases.

Marcia Hughes, community relations supervisor for the school district, said the district did not perform any testing of individuals or refer individuals to medical professionals for any particular testing.

“If an individual expressed concern regarding possible exposure to asbestos, the District encouraged the individual to consult with medical professionals regarding their concerns,” she wrote in an email. “At this time, the District has not been provided with information that any individual has tested positive for asbestos exposure as a result of their presence at the job site.”

Wuehr added that for two years, the Cedar Rapids School District did not have a designated person on-staff who was trained to ensure that asbestos issues are handled properly, as required under the federal Asbestos Hazard Emergency Response Act.

The district recently designated Chris Gates as that person, he said.

Hughes did not respond to questions regarding the designated staff person, but released the following statement today (Thursday, Dec. 10, 2015):

The District has had an opportunity to review the DNR’s public litigation report with the project’s architect/engineer and legal counsel.  This review found that there were several inaccuracies in the report.  In addition, there were areas of the report that only contained partial or incomplete accounts of events that caused the account of those particular events to be inaccurate.

1.  Although the report alleges there were instances where uncontained asbestos was found in the school, these allegations involve areas of the school where abatement and renovation work was occurring and where students and staff members were not present.

2.  When the District was made aware that uncontained asbestos was found in the school, appropriate measures were immediately taken to address the situation consistent with commonly accepted asbestos abatement procedures.  These procedures included: identifying the presence of asbestos; placing the area where asbestos was present under containment so no one other than asbestos abatement workers could enter the area; cleaning the area; testing the air in the area; recleaning and retesting the area, if necessary; and reopening the area only after air tests indicated that the area was clear of asbestos.

3.  One air sample that was taken in a construction zone was slightly higher than the clearance criteria.  Based upon this information and recommendations from the District’s consultants and the DNR, the District chose to proactively close the building and clean all areas that had been affected by recent construction including adjacent areas.  The cleaning was performed by abatement contractors that were not associated with the original abatement firm.  After the areas were cleaned, 105 air samples were taken throughout the building and testing confirmed that the building was safe for occupation prior to the start of school.

The District’s actions have always been motivated by the District’s goal to provide a safe environment for students and staff at school and the workers on the job site.  The District looks forward to addressing its concerns regarding the inaccuracies contained within the DNR’s litigation report with the Environmental Protection Commission.