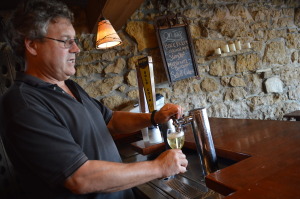 LISBON – Had their small apple orchard proven less productive when they first moved to Iowa, the owners of Sutliff Cider would likely be brewing beer instead of their award-winning hard cider.

“There are only so many apple crisps and apple pies you can make,” said Scott Ervin, 54,  co-owner with his wife, Pia, of the cidery in rural Lisbon, Iowa.

The couple moved from Los Angeles in 1995, when Scott, an aerospace engineer, transferred from Rockwell Collins in California to Iowa. He had graduated from high school in Marshalltown and from Iowa State University, while his wife is a California native.

Both were seeking a change of pace that they found in the nearly 40-acre farm, just south of Lisbon on scenic Sutliff Road in Linn County. Known for its historic bridge that was severely damaged in the 2008 flood, Sutliff is an unincorporated town about five miles south of the Ervins’ farm. 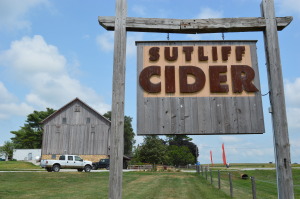 Rustic, century-old barns and other outbuildings dot the farmstead, alongside the apple orchard in which just 20 trees originally grew.

While Scott continued to work at Rockwell up until two years ago, the couple earlier began making cider with apples from the small orchard, although that wasn’t their initial choice.

“We started making beer, and beer was going to be our thing,” Scott said, but after trying out a cider press, they decided to switch gears to hard cider.

He pointed to Benjamin Franklin and Thomas Jefferson among early advocates of cider and its close relative, apple cider vinegar, which has long been used for medicinal purposes.

The Ervins don’t make any health claims, but their Sutliff Hard Cider, with a 6 percent alcohol content, has its own claim to fame.

Alongside hard ciders from France, England, Quebec and beyond, Sutliff Cider has been rated among the world’s 30 best on RateBeer.com, with just a handful of American ciders ranking in the top 50. 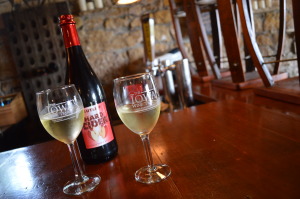 Sutliff Cider has been rated among the world’s 30 best hard ciders. (photo/Cindy Hadish)

Their key, Scott said, is handcrafting the cider with 100 percent fresh-squeezed apple juice.

“We don’t add water, chemicals, nothing,” he said.

About 20 bushels of apples are used in each barrel, with each barrel producing 300 bottles of hard cider.

Balance is important, Scott said of the sugar content and the sweet/tangy combination for which their hard cider is known. California winemakers helped him refine the blend, made in a style similar to white wine.

Table apples are used in the cider, including Jonathan, Gala, Cortland and others, he noted. The Ervins also have planted 600 English apple trees in 25 varieties with “lots of tannins” that make them appropriate for cider-making, rather than eating, Scott said.

Apples used for the cider come from their own orchard, as well as other local orchards and some from out-of-state, to keep up with the 200 to 400 gallons of cider made each week, year-round.

Some of the production has been moved to Wilson’s Orchard in Iowa City, where the apples are now processed on a larger press than what was previously used at Sutliff Cider.

Fresh juice is added at the end of the fermenting process “to help the sweetness come through,” Scott said. Apples, with less sugar than grapes, naturally ferment to 7 percent alcohol content. The fresh juice knocks down that content to 6 percent. 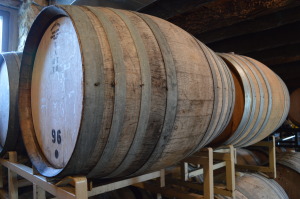 About 20 bushels of apples are used in each barrel, with each barrel producing 300 bottles of hard cider. (photo/Cindy Hadish)

Outbuildings at the farm are used for storing the Chardonnay oak barrels where the cider is aged for three to six months.

The blend is carbonated for three to four days before it is bottled on-site.

“Cider straddles the beer and wine industry,” Scott said. “It’s carbonated like beer, but made like a wine.”

An 1890s barn, with a limestone foundation that the Ervins had painstakingly restored over a two-year period, serves as the tasting room and headquarters for live music events that happen every Sunday from late April through early November.

Saturdays are reserved for weddings, graduations and other events that are scheduled on-site.

Most of their business, however, is in wholesaling to Iowa bars, restaurants and stores such as Hy-Vee. Scott estimates Sutliff Hard Cider is in 60 to 80 establishments in Des Moines, Iowa City, Ames, Cedar Rapids and Marshalltown.

Scott noted that the popularity of hard cider has been growing, especially compared to the early days of Sutliff Cider, when explanations often had to be made about the difference between sweet (non-alcoholic) and hard cider.

“It’s really taking off as an alternative to both beer and wine,” he said. 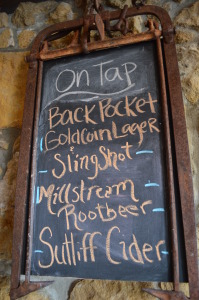 A sign notes the beverages on tap in August 2014 at Sutliff Cider in rural Lisbon. (photo/Cindy Hadish)

Millstream root beer and a variety of local beer is on tap, as well.

Sutliff Cider is the only site in Iowa that makes hard cider, as far as he knows, though many apple orchards make sweet cider.

The couple’s two sons, Zachary, 18, and Tony, 16, help with the operation, along with employees, Tanner Koomar, hired last year as brewmaster; manager Michele McCoy and John Stair, known as the “cellar rat” who has multiple duties.

Sherri Schuchmann of Cedar Rapids visited in late summer with her son, Bryan Pinnow, who had told her about Sutliff Cider.

“I always wanted to come here and try it,” she said, describing the cider as very refreshing. “I just love the whole ambiance here. It’s very rustic and country-like.” 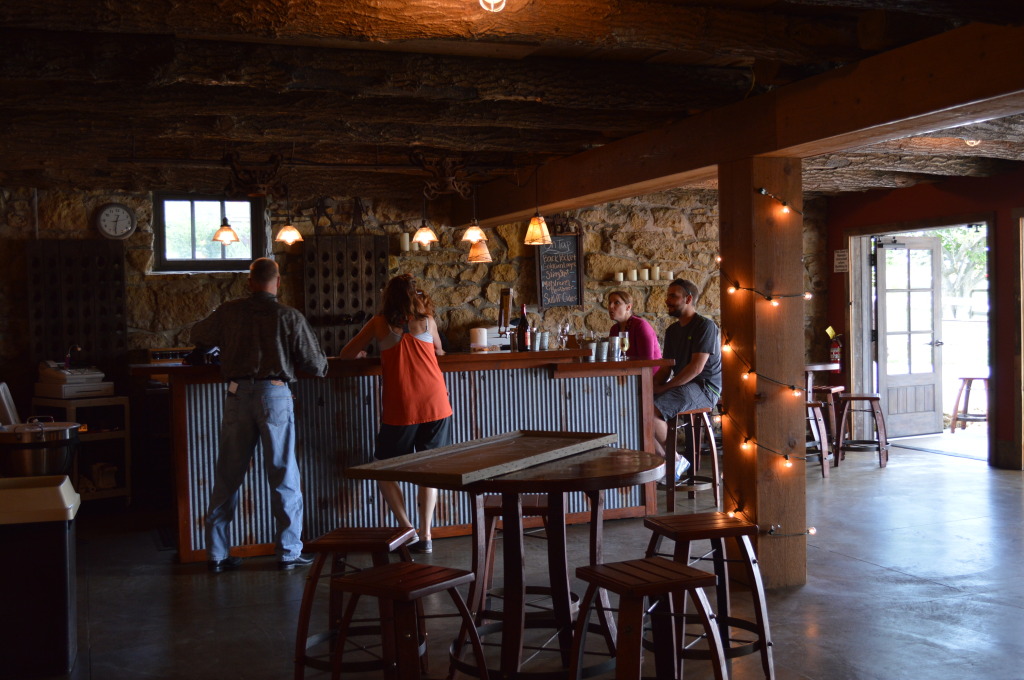