Thousands of trees in the bluffs of northeast Iowa offer more than scenic beauty for Dan Potter’s family. They provide a livelihood and foster a mutually beneficial relationship between the family and the land surrounding their home.

Maple trees tapped to make Great River Maple’s pure maple syrup are tended year-round by Potter, who has turned the pastime into his full-time job.

While many Iowans try their hand at syruping as a hobby, Great River Maple is one of just a half-dozen or so maple syrup farms of its size in Iowa.

Roots in syrup-making run deep in Potter’s family. His great-grandfather tapped some of the same trees that still grow on the family’s land near Garnavillo, along the Mississippi River.

A financial challenge — the Potters needed $30,000 eight years ago for a new well — prompted the family to look at syrup for its income potential.

Initially, they asked a log buyer about the value of their trees, but with the low estimates offered, turned to tapping, rather than logging the maples.

“The first year, there were three snowstorms in a row,” Potter said, calling the late-season snow a “sugar snow,” which amps up the maples’ sap production. “The trees started going crazy.”

Potter and his wife, Dorinda, could barely keep up with the buckets of sap. The sap is boiled down to make syrup in an evaporator; last year the Potters collected 50,000 gallons of sap that became 1,000 gallons of maple syrup.

That bucket system they used the first year has evolved into a system of nearly 50 miles of tubing that now runs between the tapped trees to transport the sap.

Potter said the lines need to be checked 10 times during the season, resulting in 500 miles of walking through the bluffs and adding up to an exceptional familiarity with the trees. He knows, for example, that there are 8,500 red, black, silver and sugar maples on the land, of which 7,200 have been tapped.

The remainder would be tapped, as well, if they had more time. Potter gave up his job as a carpenter and roofer to concentrate on Great River Maple. 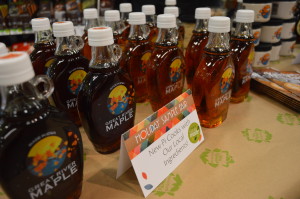 “I needed to have more kids,” he joked. As it stands, all three of the couple’s adult daughters and extended family help with the business in one way or another, including marketing.

All syrup is not created equal. Oftentimes popular “syrup” brands are actually made with high-fructose corn syrup and artificial color, but Great River Maple products are 100 percent maple syrup.

One “ridiculously” popular product, Potter said, has been their Bourbon Maple Syrup. Released last fall, the syrup is aged in bourbon barrels, giving it a mellow taste, but without any alcohol content.

The business also has expanded into maple cream, which has proven equally popular, and Great River Maple is even featured in craft beer.

“People tend to think maple syrup and think of a flavor similar to Aunt Jemima,” McClain said. “This flavor is nothing like that.” Rather, she described the taste as woodsy and rustic, with a hint of real syrup, “but still wholly unique.”

“This is something that woodland owners should look at, especially in northeast Iowa, as another source of income,” Randall said. “It would work well into existing dairy operations, as the work load is outside of the row crop season.” 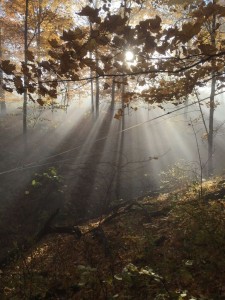 Tubing for sap is shown as light shines through the Potter’s woodlands. (photo/courtesy Great River Maple)

Iowa’s maple syrup season generally begins in late February or early March and can last as long as six weeks. Warming daytime temperatures and cold nights are needed for the sap to flow, but as soon as the trees begin to bud, the season ends.

Several years ago, the Potter family began hosting a maple festival, which has turned into an annual event, with a meal, games for children, demonstrations and opportunities to sample and buy Great River Maple’s products.

Last year, about 1,000 people attended. “We really do throw the doors right open and invite everyone to visit us,” Potter said.

The site also is open for tours at other times by appointment. Lucky visitors might see rare cerulean warblers, pileated woodpeckers and other wildlife that find a place in the family’s woodlands.

“We work hard to make them happy,” Potter said of the trees, some of which are 150 years old. “And they work right back for us.”

Read more about healthy living at the Radish Magazine and find more information on Great River Maple at: www.greatrivermaple.com