They won’t suck your blood, but will eat the insects that do; fearing FOR bats as Halloween approaches 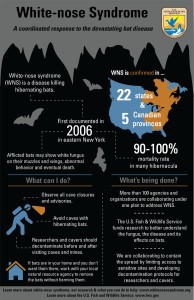 I saw two bats circling overhead this week, which I thought was unusual, given Iowa’s recent cold streak, but it also made me grateful that we’re still seeing bats in this area.

In some parts of the country, white-nose syndrome has devastated bats populations. I view bats as a good friend of the environment, especially given how many blood-sucking mosquitoes and other insects they devour.

Just today, the U.S. Fish and Wildlife Service sent along the following, with more info about our good friend, the bat:

Bats get a bad rap. Despite their spooky image, bats are far from terrifying, and we can assure you, they really don’t want anything to do with your hair. They aren’t flying rodents, don’t build nests or breed like rabbits, and won’t rapidly infest your house.

What should we fear this Halloween instead of bats? Their extinction. The deadly white-nose syndrome disease is devastating our hibernating bats. Named for the white fungus that appears on bats, WNS has killed more than 5.7 million bats in eastern North America. It’s even led to a 99-percent drop in northern long-eared bats in the Northeast, which is why we proposed to protect them as endangered just earlier this month. (In fact, WNS was discovered in NY in 2006.)

Bats range in size from the world’s smallest mammal, the bumblebee bat, to the 6-foot wingspans of the flying fox. Our native bats in this area are small, most weighing about the same as a few pennies. The thousands of insects they eat each night save farmers millions of dollars on insect control and crop damage. That makes bats the most organic form of insect control you can get.

For more about this issue, click on the infographic or see more on the U.S. Fish and Wildlife Service website.