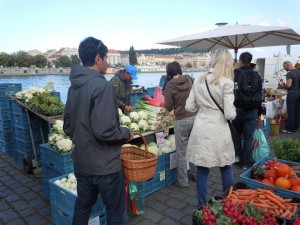 Customers shop at a farmers market along the Vltava River in Prague, Czech Republic. The Czech legend of the Three Kings serves as a warning for a late frost. (photo/Cindy Hadish)

Even though we’ve enjoyed temperatures in the 70s and 80s this week, I hope you weren’t tempted to plant your peppers, tomatoes or other tender plants outside. I brought my tomato seedlings indoors in case temps dip below freezing in the next few days. Your perennials should be fine, but as a precaution, you might want to use a light sheet overnight to cover anything that could be susceptible to frost.

With cold temperatures forecast for the early part of May in Eastern Iowa, it’s an appropriate time to think about the Czech legend of the Three Kings, which serves as a warning to protect tender plants against a possible late frost.

The legend has added meaning for me after traveling to the Czech Republic and seeing how similar Iowa’s terrain is to the home of my ancestors.

I’ve heard various forms of the Three Kings, or Three Frozen Kings, but this one was told to me several years ago by Olga Drahozal of Cedar Rapids.

As the story goes, the three kings or saints – Pankrac on May 12, Servac on May 13 and Bonifac on May 14 – were frozen when the temperature dropped while they were fishing at sea. On May 15, St. Zofie came along with a kettle of hot water to thaw out the three frozen kings.

The legend, brought to the United States by Czech immigrants, means that, for Iowans,  it’s a good idea to wait until May 15 to plant your tomatoes, peppers and other tender vegetables and flowers, or at least provide them with some protection in case overnight temperatures drop below freezing.

If you missed this post from earlier this spring, you can find the average last frost date where you live and a chart from the National Climatic Data Center.