Timing is right for potato planting on Good Friday 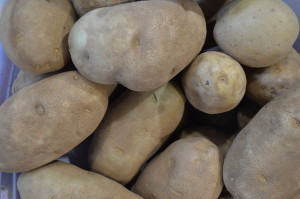 If you’re able to stay safe at home during the coronavirus pandemic, there is no better therapy than getting outside and into the garden.

While early April is too soon for some outdoor tasks, this week could be a prime time to plant potatoes.

One gardening tradition calls for planting potatoes on Good Friday, which is likely tied to phases of the moon.

According to this tradition, flowers and vegetables that bear crops above ground should be planted during the light, or waxing, of the moon, from the day the moon is new to the day it is full. Flowering bulbs and vegetables that bear crops below ground are planted during the dark, or waning, of the moon, from the day after it is full to the day before it is new again.

Generally, that would set Good Friday during the waning of the moon, the time to plant below-ground crops. This year’s Good Friday falls on April 10.

Standard practice for potato planting calls for soil temperatures above 45 degrees Fahrenheit, and while this map from ISU Extension shows that all of Iowa is not quite there as of early this week, it could possibly hit that mark by Friday.

Potatoes can also be planted in large pots, which makes them easy to harvest when the time is right.