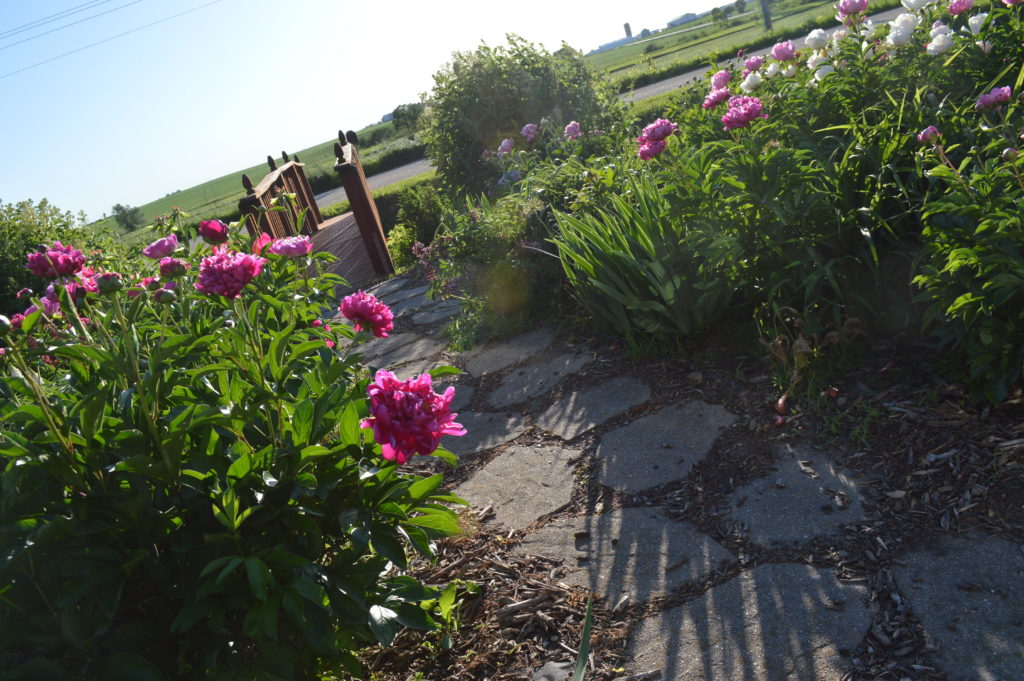 Sunlight dapples through foliage on a stone path lined by a variety of peonies and iris, connecting to a bridge outside the home of Mary and Brian Grimm in rural Lamont. The couple grow 700 different varieties of peonies on their acreage. (photo/Cindy Hadish)

What started as a hobby has grown into something much more for Mary and Brian Grimm. 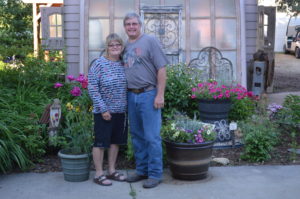 Mary and Brian Grimm stand in front of the potting shed on their acreage in northeastern Iowa. In addition to numerous peonies, the couple grow annuals in large planters that provide colorful accents. (photo/Cindy Hadish)

“I’d call it an addiction,” Mary said of the couple’s 700 different varieties of peonies planted at their acreage in rural Lamont, in northeastern Iowa.

When they relocated from Strawberry Point in 2011, the Grimms hauled 21 pickup loads of plants from their previous home. “We ended up moving more plants than furniture,” she said.

Their gardens, with about 1,000 peony plants on three-quarters of an acre, attracted the attention of a local master gardener, who encouraged the Grimms to open them up for public viewing.

They have since welcomed visitors from nursing homes and others who stop by during peak season, typically two weeks in late May, though they are taking extra precautions during the  pandemic this year.

“They just love it,” Mary said, noting that some visitors reminisce about the peonies their grandparents grew. “It kind of brings something out in people.”

Brian added that many older varieties of peonies sport large, fragrant flowers “and that’s what they remember: grandma’s peony bush.” 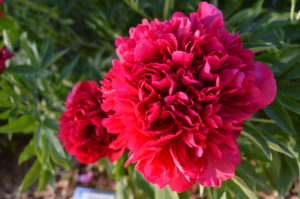 In addition to those older varieties, typically in whites and pinks, the Grimms have expanded into more unusual types, such as tree peonies, and a range of colors, including shades of coral.

Peonies are known for their longevity, with some living for a century and passed down through generations. The showy flowers are synonymous with Memorial Day, but with last year’s late spring, the season ran well into June in northeastern Iowa.

The Grimms hand weed around the peonies and only fertilize lightly, as too much nitrogen results in dense foliage, but no blooms.

They also rarely use support rings, unless the plants are particularly heavy. Broken branches can be “crutched” with tape, if needed. 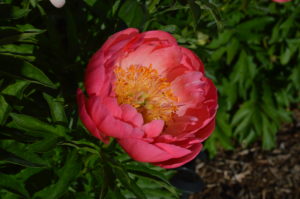 Peony “Coral Sunset” brightens a spot in one of Mary and Brian Grimm’s gardens in rural Lamont. (photo/Cindy Hadish)

They debunked the notion that ants are needed for peony buds to open. “It’s a myth,” Brian said, adding that while ants – attracted to the nectar secreted by the buds – are not necessary for blossoms, they won’t hurt the plants, either.

He also noted that deer tend to choose other plants over peonies.

“That’s one of the great things about them,” Brian said. “They last forever and nothing really bothers them.”

Mary has one of her late father’s peony bushes and planted one in honor of her mother, called “Lois’ Choice” – a tricolor pastel in yellow, pink and creamy peach – but when asked to name her favorite peony, she demurred. 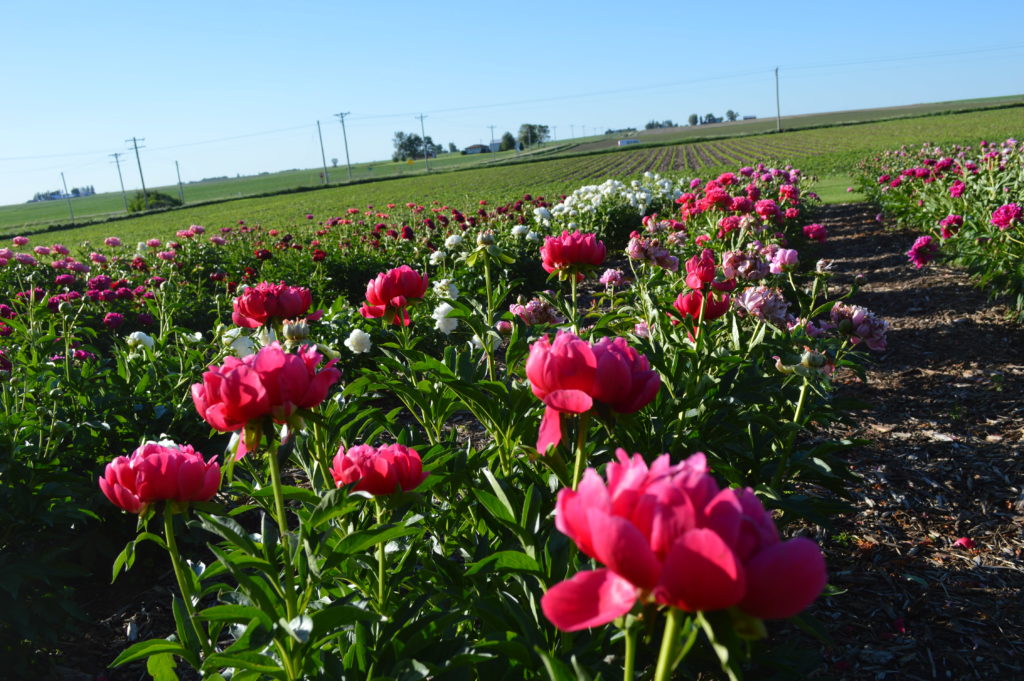 Hundreds of peonies grow next to a farm field at the Grimm’s acreage in rural Lamont. Most varieties prefer full sun in well-drained soil. (photo/Cindy Hadish) 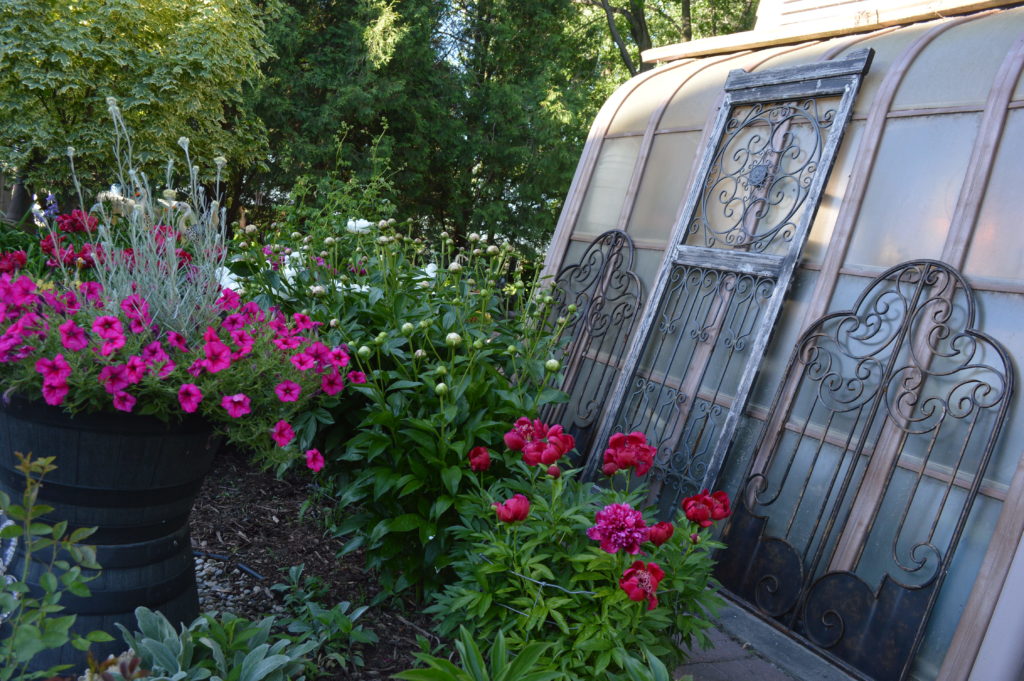 “Walter Mains” peony grows next to the potting shed on the acreage of Mary and Brian Grimm. With burgundy-red flowers, Walter Mains was the 1974 American Peony Society’s Gold Medal winner. (photo/Cindy Hadish) 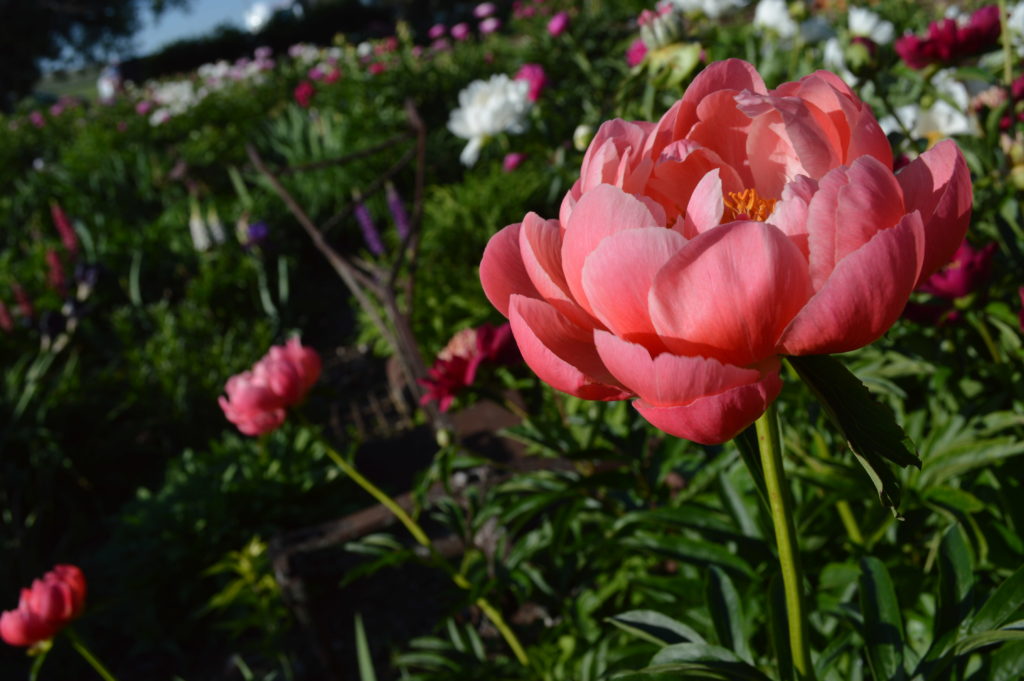 Peony “Coral Charm” stands out with its glowing coral hue against a backdrop of other peonies and lupine at the rural Lamont home of Mary and Brian Grimm. Coral Charm, winner of the American Peony Society’s Gold Medal in 1986, is an early blooming semi-double peony. (photo/Cindy Hadish)