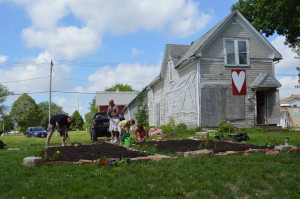 The little Czech garden is planted earlier this spring on a lot in the New Bohemia neighborhood of Cedar Rapids. (photo/Cindy Hadish)

CEDAR RAPIDS – While the city awaits its fabled casino to appear on a large swath of vacant prime real estate and threatens a nearby gardener with legal action for taking care of a smaller plot of vacant land, here is what is happening at our little Czech garden.

The garden was planted this spring in a slightly different location than last year in the New Bohemia neighborhood of southeast Cedar Rapids.

Beth DeBoom, president of Save CR Heritage, is restoring a house at the site and the garden is an effort to bring life to that end of Third Street SE, where so many buildings were demolished after the 2008 flood. Steve Gravelle and a handful of others joined in the planting.

I was watering the garden today when a neighbor boy rode up on his bike and told me it was going to rain. He then pointed out a cat that was sunning itself on a nearby porch. So, at only 7 or 8 years old, this boy was already adept at striking up a conversation with a gardener, who will always want to discuss the weather, and virtually anybody else, given the universality of entertainment-by-cat.

But even better, when I asked if his family had an opportunity to pick any tomatoes this year, he asked if he could try one. “Of course,” I said, showing him how to pick it, and encouraging him to return with his parents.

He sampled the tomato and then asked, “Can I pick more now?”

After getting permission, he picked as many tomatoes as he could reach and as I left, I wondered how many other children could have the same opportunity if more vacant lots were cultivated as gardens rather than forced to sit empty, awaiting the next pipe dream.