Wild Woods Farm: how a young engineer turned to farming 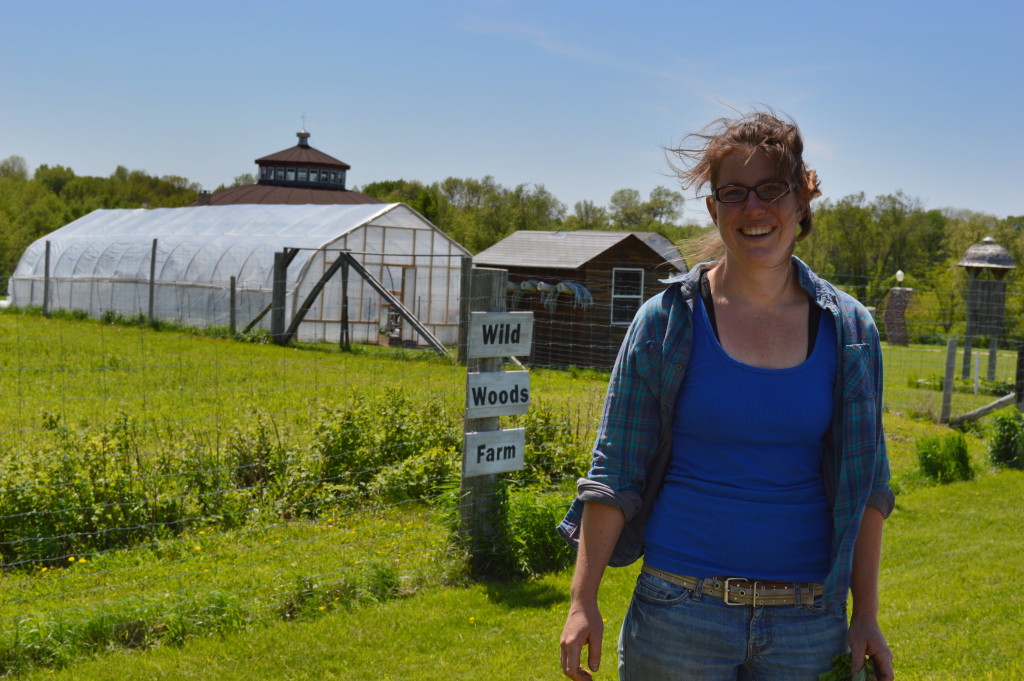 Kate Edwards is shown earlier this year at Wild Woods Farm near Solon, Iowa. Edwards gave up an engineering career to become a farmer. (photo/Cindy Hadish)

SOLON — Kate Edwards was on her way to a successful engineering career when she realized her career goals didn’t align with her passions.

She took a year off from her job in the Twin Cities and discovered that the land in Iowa was calling her home.

Edwards, 28, is now in her fifth year of operating Wild Woods Farm, which has become a successful Community Supported Agriculture (CSA) enterprise in rural Solon, not far from Iowa City.

“This is definitely a passion, and my lifelong dream,” she said, walking through the three acres of her productive farm, where potatoes, garlic, onions, lettuce and other vegetables grow, in 150 different varieties.

Although her parents were not farmers, she spent a great deal of time on her grandparents’ farms; one near Monticello and the other in rural New London.

“One of them said, ‘we farmed so our children and grandchildren wouldn’t have to,'” Edwards recalled. “The ironic thing is, I’ve chosen to farm because of them.” 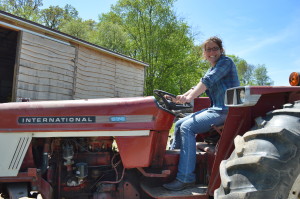 An International tractor that her grandfather owned continues the family farming legacy for Kate Edwards of Wild Woods Farm near Solon. (photo/Cindy Hadish)

One of her grandmothers gave Edwards her grandfather’s 1970’s International tractor. An uncle helped her learn how to drive a tractor. Her grandparents often visit her farm and offer advice.

Still, she saw numerous challenges in reaching her goal.

“I was viewing being a woman as a barrier to getting into agriculture,” Edwards said, along with thinking she lacked the skills that comes with growing up on a farm.

She sought out mentors and found one in Susan Jutz, owner of ZJ Farm in rural Solon, who launched Local Harvest CSA in 1996, one of the first CSA operations in Iowa.

“Small vegetable farming is challenging,” Jutz said, citing land prices for new farmers among the obstacles. “I think Kate has the determination and the creativity that it takes to succeed in this business.”

Jutz has mentored numerous young farmers over the years, and noted that Edwards’ engineering background can be an asset.

“She thinks things through step-by-step in a real detailed way,” Jutz said. “You also have to be innovative in seeing trends and capitalizing on that, which Kate does.”

Schwab, a friend of her family, owns the land that Edwards rents, next to the round “Celebration Barn” that he constructed in rural Solon.

Edwards said she was initially apprehensive about approaching Schwab after her parents said he was interested in seeing the land actively farmed, but he was enthusiastic about the idea and now even grows the potatoes for the CSA.

Since then, she, Schwab and Jutz have formed a venture called The Farming Institute, in which they share their expertise with beginning farmers. All three share an interest in encouraging vegetable farming as a way to benefit the broader food movement and Edwards spent time advocating for small farmers as past chairwoman of the Johnson County Food Policy Council.

When she started Wild Woods Farm, Edwards initially took her produce to farmers markets, barely making enough to break even. The CSA model is more to her liking, with members paying upfront for weekly shares of vegetables throughout the growing season.

“We pick it that morning and deliver that evening, allowing us to offer incredibly fresh produce,” she said. “I’m a full-time farmer and I wouldn’t be one without a CSA.”

Edwards uses organic practice on Wild Woods Farm and notes that her farm-to-table carbon footprint is under 10 miles.

Vanessa Curtis, an employee of University of Iowa Hospitals & Clinics, is one of the 200 or so summer CSA members of Wild Woods Farm. She and her husband moved to Iowa City from Madison, Wis., five years ago, and met Edwards at a farmers market.

“When we joined, the main reason was to have a source of local and healthy produce,” Curtis said. “We would love to have our own garden, but we don’t have much space and are very busy trying to fit work and play into every summer day, so the CSA has been the next best thing.”

Other reasons they continue their membership include the satisfaction of supporting a young woman’s growing business, the convenience of picking up the weekly box at a drop-off site near the bike trail, not far from work, and the community feeling of meeting other members at the pickup and sharing recipes.

Edwards includes recipes in the boxes — a simple coleslaw dish when cabbage is in season, for example — and for other prolific vegetables, such as kale.

Hearing comments from members such as Curtis is the most rewarding part of being a vegetable farmer, she said.

Edwards grabs a bite of crisp, fresh lettuce that she grew early in the season, with the help of a new moveable high tunnel. 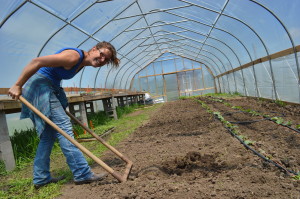 Kate Edwards has fun demonstrating the use of a broad fork inside her high tunnel at Wild Woods Farm near Solon, Iowa. (photo/Cindy Hadish)

Also known as a hoophouse, the plastic-covered structure serves as protection against Iowa’s weather, allowing farmers like her to start produce earlier in the season and grow later at the end of the season.

Row upon row of seedlings also get their start inside the high tunnel before being transplanted outdoors into tidy rows, surrounded by an 8-foot-tall deer fence.

Edwards graduated with both undergraduate and master’s degrees in engineering from Iowa State University.

She recalled one of her professors commenting that, “once you have an engineering degree, you can do so many things with it,” she said. “Little did he know, I’d be farming.”

Having an engineering background has proved beneficial to her new career.

“Everything is in spreadsheets,” Edwards said. “There’s a lot of planning involved, and timing of (plantings.) There’s also a level of intuition.”

The farm has been profitable enough for Edwards to hire two part-time employees, and three summer employees who work full time.

Her goal is to add spring CSA shares in the future and grow the business enough to start buying farm land of her own in the Iowa City area.

Edwards doesn’t find it unusual to be a 20-something engineer-turned farmer, citing one of her favorite sayings that “normal is just a setting on the dryer.”

“It is so incredibly rewarding to take something from seed to table,” she said. “This is exactly what I want to be doing.”

In addition to the summer CSA, Wild Woods Farm offers a fall CSA that runs from October to November and features a combination of fresh lettuce and other vegetables grown in the high tunnel, along with potatoes, onions, squash and other storage crops. Find more information at: www.wildwoodscsa.com 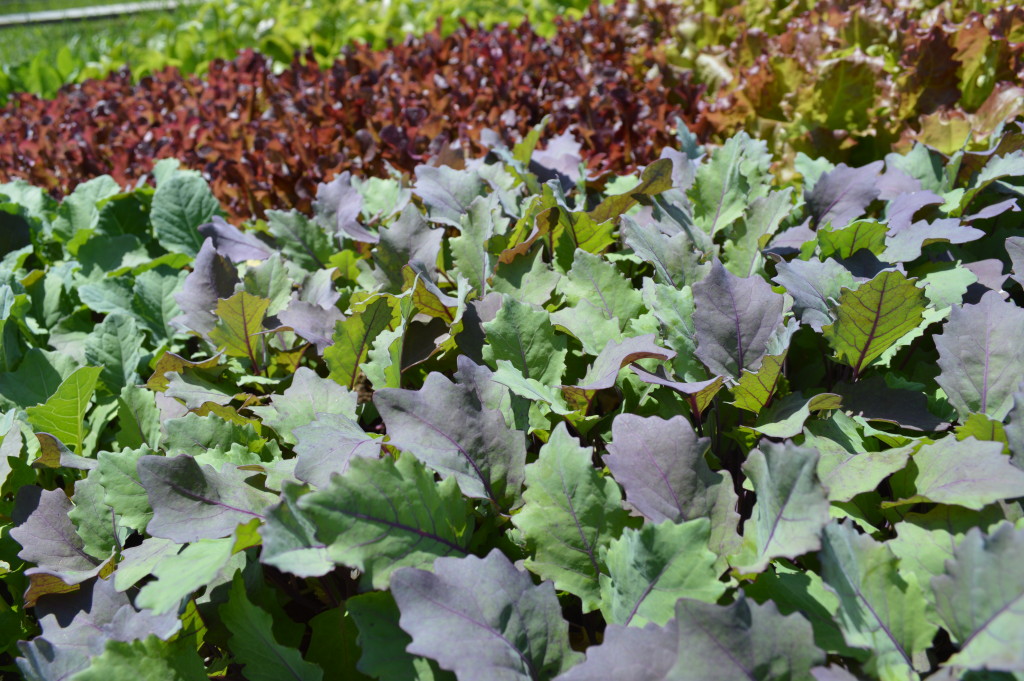 Seedlings are ready to plant earlier in 2015 at Wild Woods Farm near Solon. Farmer Kate Edwards, who earned degrees in engineering, keeps track of her enterprise in spreadsheets. (photo/Cindy Hadish) 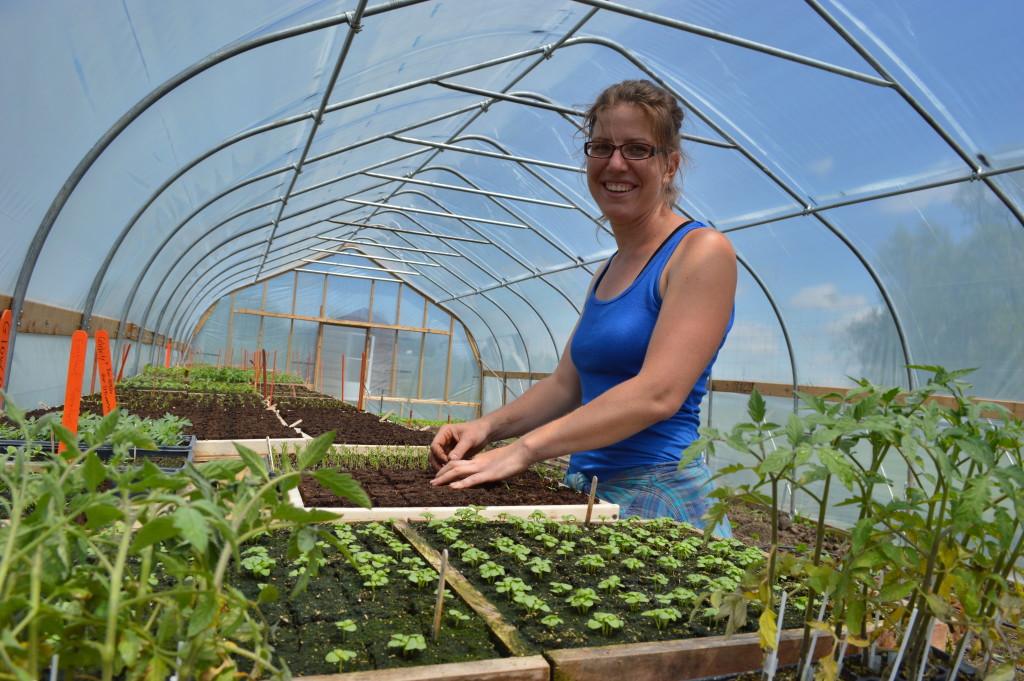 Kate Edwards takes a break from planting inside her high tunnel at Wild Woods Farm near Solon. Edwards is in her fifth year of operating the farm, which has become a successful CSA enterprise. (photo/Cindy Hadish)