UPDATE (Oct. 1) – Congratulations to Stacey Lindsay, whose name was drawn as the winner of the Homegrown Harvest contest! Thank you to all of who participated here and on the Homegrown Facebook page!!

What gardener isn’t proud of a bumper crop of blueberries, mouthwatering melon or a flawless Fuzzy Bomb tomato?

Now is the perfect time of year to celebrate the season’s bounty and share your gardening successes with the new Homegrown Harvest contest.

This is an easy one and the prize is awesome. Just post a photo on the Homegrown Facebook page of something you grew, whether it’s a vegetable, fruit or flower, anytime during the month of September.

Because I’m sure all of the photos will be great, I’ll draw one name at random from anyone who posts on the page from now until Sept. 30, 2013. The winner will receive a one-year consumer membership in the Iowa Valley Food Co-op.

If you don’t have any photos, that’s OK. Just share a comment, telling us about one of your gardening successes or favorite veggie. And, if you’re not on Facebook, just add a comment to this post and you’ll be entered. Your info won’t be used for anything other than to enter in the drawing.

The Iowa Valley Food Co-op, based in Cedar Rapids, uses an online system for members to order fresh produce, meat and other local foods directly from the producers. If you’ve heard about the co-op, but weren’t quite sure what it involves, this is the perfect opportunity to give it a try.  And if you happen to already be a member and your name is drawn, your renewal membership will be free! 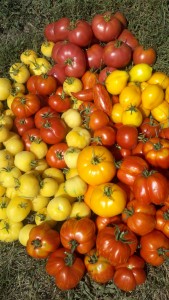 To kick off the contest, Brad Danielson offered a photo of this incredible variety of heirloom tomatoes.

Brad started vegetable gardening about five years ago, but this is his first year for the garden at a new home.

Besides the bumper crop of tomatoes, Brad showed me his good-sized butternut squash, bright orange pumpkins and bountiful potato plants.

Even with Iowa’s recent drought, the garden looks great.

If you have similar success stories, be sure to share your photo – or comment – in the Homegrown Harvest contest by the end of this month for a chance to win!