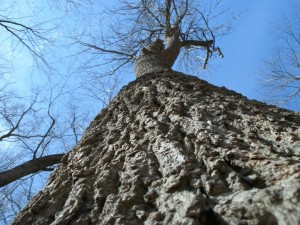 The Iowa Department of Natural Resources announced today that the 114-feet-tall black ash was damaged in a wind storm, ending its reign as the tallest ash in the country.

Damage was discovered Thursday by a team planning to give it a preventive treatment for emerald ash borer.  The top of the tree had blown down at around 30 to 35 feet up the trunk.

According to the DNR, the tree is in an isolated location on private property in Clayton County near Pikes Peak State Park, which allowed it to reach its champion size. The tree’s height also made it susceptible to wind damage.

The DNR reported that there were no signs of emerald ash borer.

It is likely the next national champion will be from another state as Iowa currently does not have a tree close to those measurements.

Shannon Ramsay, CEO and Founding President of Marion-based Trees Forever, said one large oak or ash feeds thousands of insects, birds and other creatures of the forest, both urban and rural.

“This is a symbolic reminder that we have to continually replant and invest in care if we want large, healthy trees in our future,” she said.