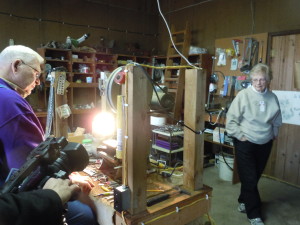 Genny Bennett tried to stay out of the spotlight as photojournalist Max Freund shot footage of her husband Donald Bennett at work in their shop in Oneida. (photos/Cindy Hadish)

“How is your mother?”

The question was an odd way for an interview to start, as I’m usually on the other end of the queries.

A photojournalist and I had traveled to the small community of Oneida in northeast Iowa to talk to Genny Bennett about her business, Oneida Nameplate Co., which makes medical alert jewelry, and discovered she and my mother had roomed together years ago while attending Mount Mercy College in Cedar Rapids.

I remembered Genny’s question as I read about the tragic brush fire that took her life on Easter. What came through during my interview with her and  afterward was an overwhelmingly caring person, from her customers to her employees, family and even to this daughter of a former roommate.

When the Gazette had lay-offs not long after the story ran about her business, Genny was one of the first to ask if there was any way she could help me.

Kendra Carpenter, who worked at Oneida Nameplate for about eight years, said the two stayed friends even after Kendra went to work elsewhere.

The tribute Kendra wrote about Genny reinforced my perceptions of this small-town business owner as the heart of Oneida: “Mother, grandmother, innovator, conservationist, activist, boss, friend, neighbor, and a true example of an angel on earth. I have thanked God every day since meeting her, that I crossed paths with Genny Bennett in my lifetime. We all know that God calls for his angels to come home to him, but are never ready to lose one of our own in the process. Genny ‘ s legacy will live on in her beloved town of Oneida, through the works of her loving hands, from the restoration of the town park to the preservation of the original schoolhouse. Honor her memory and take your kids to the park to play in the shadow of the beautiful and historical schoolhouse. Or the next time you use the Post Office in Greeley think of how it wouldn’t be there if she didn’t fight for it. Most importantly, honor her life’s work on Medical Jewelry made with precision and pride in small town USA, and don’t buy that crap from Walmart or another greedy corporation , but from an industry first where real people still answer the phone and really care! I love you Genny Bennett! Always in my heart.” 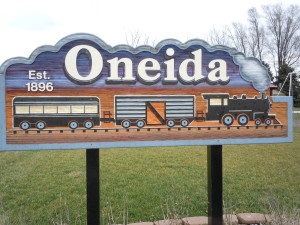 Generose “Genny” Bennett would have turned 79 in May. Her obituary is here and this is the article I wrote that ran in The Gazette in December 2012:

ONEIDA – An Internet-savvy grandmother has helped fuel worldwide name recognition for this unincorporated township set among the farm fields of northeast Iowa.

On any given day, 77-year-old Genny Bennett might talk to a customer in Germany, Australia or other countries around the globe, as they place orders to Oneida Nameplate Co.

“I should have retired long ago, but it’s never been more interesting,” Bennett said, citing an increased demand for the medical alert bracelets the company makes. “People call in and I love to chat with them. Sometimes we have to look it up on a map and see where they’re calling from.”

A growing number of customers with food allergies, diabetes, and conditions such as Alzheimer’s disease, use the bracelets and medallions to notify emergency medical personnel of their condition in case the patient cannot communicate.

A breast cancer survivor, Bennett can relate to their difficulties.

“I like to encourage them,” she said. “It gives them hope.”

Christmas has become a busy time as the company segued into beaded bracelets and Black Hills gold jewelry that combine beauty and practicality as gifts.

Even with those factors, however, this year has been slow.

Bennett pointed to Google search engine algorithms as the issue. When that method changed, Oneida Nameplate’s website was no longer near the top of online searches.

“We’re just a small niche,” Bennett said. “At one time, we were one of three companies. Now there are 300 or more.”

Most of those companies have online experts to run their websites, she said. Genny and her husband, Don, 85, have had to learn as they go, as they have for nearly 50 years.

The couple founded their business in 1963. Then in Chicago, the newlyweds eventually made their way back to Iowa. Attracted by a vacant schoolhouse they purchased to serve as home and business headquarters, the Bennetts moved to Oneida in 1971.

“We raised our kids there,” Genny said of their son and daughter. “We like it this way. It’s rural and I grew up on a farm.”

At its peak, about 300 people lived in Oneida, which boasted a bank, barbershop, hotel and other businesses. Three rail lines that converged in Oneida long ago ceased passing through town.

Oneida’s population of 60 or so in the 1970s has dropped by half since then.

Residents decided Oneida should disincorporate in 1994.

Oneida Nameplate has been the only business in town for some time, now located in a former farmers Grange building and employing a good tenth of the population.

Stepping inside the tidy building is akin to seeing Santa’s workshop in action.

Employees deep-engrave the charms and medallions and hand-polish each piece. Genny Bennett noted that the modern laser engraving used by other companies becomes illegible after a short time.

“Our products last forever,” she said, citing customers who wear bracelets they purchased decades ago.

Don Bennett punches out each piece in a separate workshop and handles orders for trophies, another arm of the business.

Neither plans to retire anytime soon. The couple’s three grandchildren might someday decide to run the company, but that task more likely will fall to current employees.

Genny said she would miss talking to customers, citing a conversation she had with a woman in Germany.

The woman said she saw a castle when she looked outside her window and asked what Bennett saw.

“I’m looking out at cornfields and soybeans,” Bennett replied. “Here we are in the middle of nowhere and sending stuff around the world.”