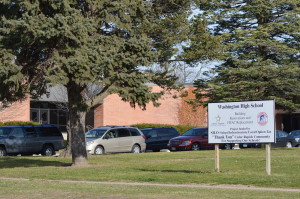 A sign outside of Washington High School notes the project that took place inside the school. The school was closed last summer over concerns related to asbestos removal. (photo/Cindy Hadish)

Some of the people testifying at an Environmental Protection Commission meeting Tuesday, Feb. 16, said staff members and students were in areas of Washington High School where they could have been exposed to asbestos.

The commission voted unanimously after the public hearing to refer the Cedar Rapids School District case, and that of Abatement Specialties, the company the district hired to conduct asbestos removal at the school, to the state Attorney General’s Office.

Kelli Book, attorney for the Iowa Department of Natural Resources, has said the Attorney General’s Office first would likely work towards a settlement in the case, but if further action is warranted, could file a civil lawsuit in Linn County. The maximum penalty for each violation is $10,000 per violation per day.

Related: Official cited teachers and students in school when asbestos in air

About 20 people provided comment during the public comment period at the Feb. 16 meeting, including many workers from Day Mechanical and Pearson Wall, subcontractors on the renovation project at the high school. Presentations were made by the Cedar Rapids School District, including Brad Buck, School Superintendent; John Laverty, School Board President; and Brett Nitchze, School Attorney. Kelli Book spoke on behalf of the Iowa Department of Natural Resources and Abatement Specialties was represented by attorney Wally Taylor, as well as another attorney and an asbestos consultant.

“I want to update you again about the issue raised during our summer construction project regarding the possibility of asbestos in the main building. You may be aware that the Iowa Environmental Protection Commission has referred the DNR’s report regarding this issue to the Iowa Attorney General’s office.  During the public comment portion of today’s Environmental Protection Commission meeting, some individuals made allegations that staff members and/or students were in areas of the building where there was exposed asbestos during the summer construction.

The District has concerns with today’s decision and looks forward to working with the Iowa Attorney General’s Office in resolving this matter.