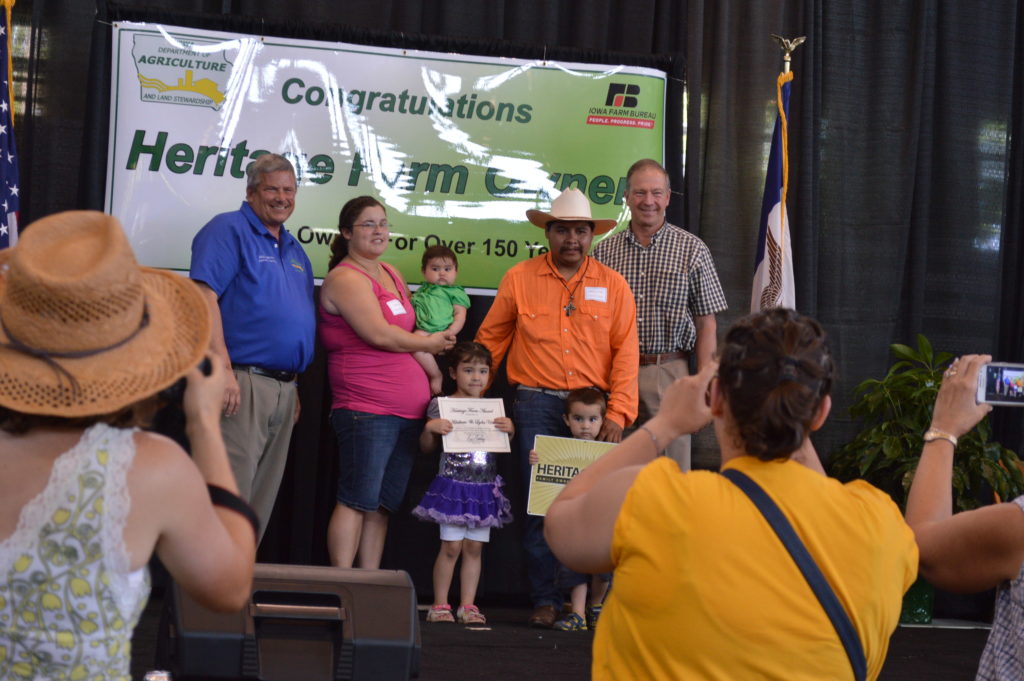 Photos were taken of each family that received a Century or Heritage Farm award at the Iowa State Fair. (photo/Cindy Hadish)

Last year, our family was honored with Heritage Farm recognition for the family farm near Chelsea, Iowa.

The state’s Heritage and Century Farm program offers a wonderful opportunity to research the past while celebrating the present and looking forward to the future of Iowa’s family farms.

A June 1 deadline was announced today for this year’s program.

See photos and more from last year’s ceremony at the Iowa State Fair and read on for information from the state about the Century and Heritage Farm program:

DES MOINES – Iowa Secretary of Agriculture Bill Northey today reminded eligible farm owners that the deadline to apply for the 2017 Century and Heritage Farm Program is June 1, 2017. The program recognizes families that have owned their farm for 100 years in the case of Century Farms and 150 years for Heritage Farms.

“The application deadline for families with a Century or Heritage Farm is quickly approaching and I hope those with an eligible farm will take the time to apply,” Northey said. “This program is a great way to highlight the deep history and strong heritage of agriculture in our state.”

Farm families with a century or heritage farm must submit an application to the Department no later than June 1, 2017 to qualify for recognition at the Iowa State Fair this year.

Applications are available on the Department’s website at www.IowaAgriculture.gov  by clicking on the Century Farm or Heritage Farm link under “Hot Topics.”

The program is sponsored by the Iowa Department of Agriculture and Land Stewardship and the Iowa Farm Bureau Federation. The ceremony to recognize the 2017 Century and Heritage Farms is scheduled to be held at the Iowa State Fair on Thursday, August 17th in the Pioneer Livestock Pavilion.