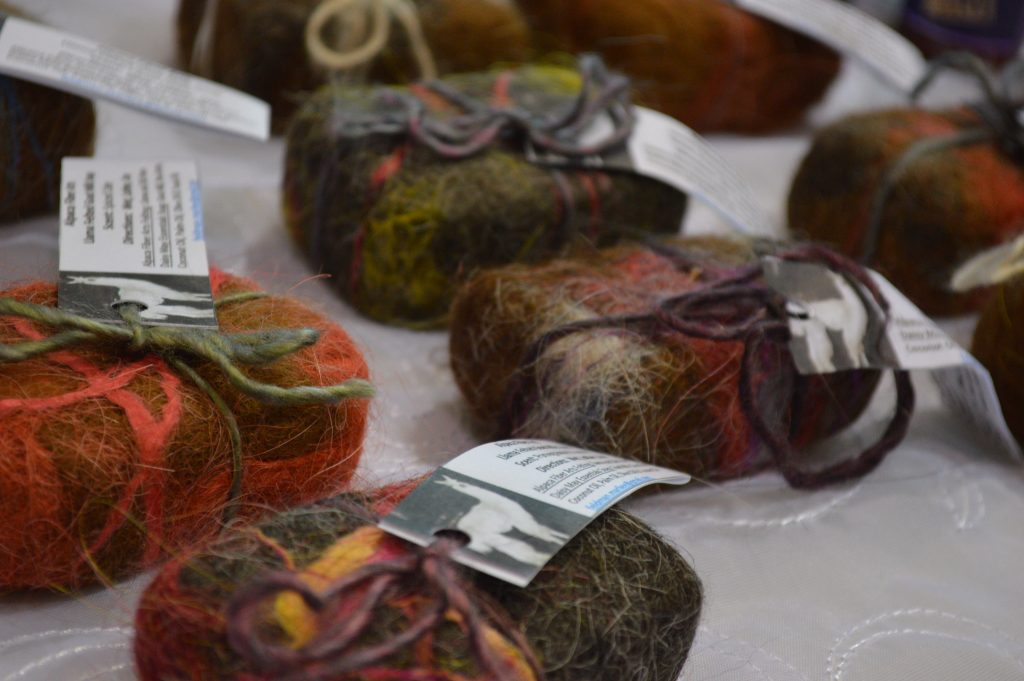 Goat’s milk — a beauty secret said to be favored by Cleopatra — is catching fire far beyond the Nile.

While the Egyptian queen purportedly kept her skin supple with goat’s milk baths, the soap form of goat’s milk is gaining a modern-day following.

“Quite a few people are making it,” said Matt McClanahan, owner of Escape Goat Soaps. Very few, however, take the hobby from “farm to shower” as McClanahan does with his Quad Cities-based business.

His family raises six goats on their farm at the edge of Davenport, including five does that are milked to provide the key ingredient for the hand-crafted soap and bath products.

The long-eared Anglo-Nubian goats, are “gentle giants,” McClahahan said, with the breed offering milk high in butter fat content. For soap, that translates into a vitamin-enriched product that creates a rich lather.

Escape Goat Soaps uses essential oils and natural, plant-based colorants, such as indigo, offering a locally-sourced product available at stores including The Soap Box; Crafted QC and Quad Cities Food Hub, all in Davenport; The Skeleton Key in Rock Island, Ill., and Living Vintage in Eldridge, as well as the Freight House Farmer’s Market, and soon at Machine Shed restaurants in Urbandale and Davenport.

Their product line includes cold-processed soaps and Egg Bath Bombs, which McClanahan’s 11-year-old daughter, Carley, helps create. One of their most popular soaps is “Goat on a Rope.”

McClanahan, whose day job involves landscaping and snow removal, freezes the goat’s milk before combining it with hot lye in large pots to melt down the coconut oil and other moisturizers used in the products.

The liquid is poured into molds to harden. He creates the soap at a studio in Bennett, where there is enough space to allow the bars to cure for six weeks.

McClanahan said he hopes to bring the family’s wether — a male goat that has been neutered — to the June 18 Healthy Living Fair in Davenport. “Cowboy” is the company spokes-goat, and, like the females, has a doglike demeanor, eager for human contact.

“It’s a fun business,” McClanahan said, adding that, while Escape Goat Soaps can be purchased online at www.escapegoatsoaps.com, he enjoys meeting customers in-person at craft shows and markets.

Megan Thede sells her Burnt Mill Candles & Soap products at the Quad Cities Food Hub in Davenport, including goat’s milk soap. But unlike McClanahan, she sometimes finds it challenging to find goat’s milk.

“Unfortunately, I do not have any close friends that raise goats, so I don’t have the luxury of using fresh from the farm milk,” she said, adding that she purchases goat’s milk when she can find it in stock at Greatest Grains in Davenport.

Jeanne White of Jeanne’s Soaps is in a similar situation. White, who learned how to make soap from her grandmother, sometimes has a hard time finding the main ingredient, given Iowa laws that prohibit sales of raw milk. She has turned to buying goat’s milk from grocery stores, which can be pricey.

When she has it, her goat’s milk soaps and body butters are popular sellers at Cedar Rapids and Des Moines farmers markets,

“It’s super-high in fat, which is what makes it such a good soap,” White said. 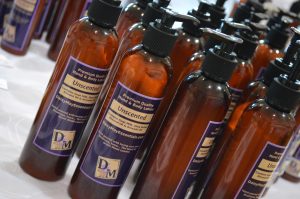 Goat’s milk lotion is one of the popular products sold by Daisy May Essentials. (photo/Cindy Hadish)

Finding goat’s milk is no issue for Cindy Snyder of Daisy May Essentials, who raises goats on her Anamosa farm. She uses the milk for her own baking and cheese for personal consumption, as well as in soaps and lotions that are sold online and stores such as Savor the Barn in Monticello; Namaste in Dubuque and Strawberry Lane in Galena, Ill.

Snyder enjoys raising goats, including miniatures that were just 7-inches tall at birth, while Daisy May Essentials’ goat’s milk soap is a popular product.

“We have a lot of repeat buyers,” she said, citing customers with skin conditions and others who simply prefer using natural products.

One big fan of Snyder’s products is Marilee Feldman, of Alpaca Fiber Arts. Feldman uses fiber from her llamas to create a natural felt coat around the goat’s milk soap, which she sells at farmers markets in Mount Vernon, Hiawatha and Iowa City.

The llama-felted goat’s milk soap works as a gentle exfoliator, similar to a loofah, but mildew-resistant.

For those without access to goat’s milk, Sandy Rosenberger, owner of New Bo Mercantile and Vintage Shop in Cedar Rapids, offers a solution.

Her store sells supplies for organic bath and body products, candle- and soap-making and other do-it-yourself projects, including a natural glycerin and goat’s milk soap base. Using the base, Rosenberger said, customers could make goat’s milk soap “in about five minutes.”

“The hard work is already done.”

Read more about healthy living at the Radish Magazine