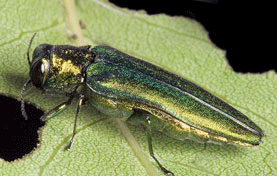 IOWA CITY – An unusual twist to the unfolding Emerald Ash Borer saga in Iowa with the announcement today of the discovery of an adult beetle, but no apparent infestation.

DES MOINES – An adult Emerald Ash Borer (EAB) submitted by an Iowa City resident to the Iowa EAB Team has been positively identified as the destructive beetle by a federal identifier.  A follow-up examination of ash trees growing in the vicinity of where the beetle was collected has failed to confirm an infestation.

A statewide quarantine restricting the movement of hardwood firewood, ash logs, wood chips and ash tree nursery stock out of Iowa into non-quarantined areas of other states was issued on Feb. 4, 2014 and remains in place.

“The discovery of an adult EAB without being able to find further evidence of an infestation is fairly unusual, but it does serve as another reminder to homeowners and communities in Iowa that the threat from this destructive beetle is very real,” said State Entomologist Robin Pruisner of the Iowa Department of Agriculture and Land Stewardship.  “The Iowa EAB Team will continue to work with officials in Johnson County and other communities to help them prepare, diagnose and respond to the threat posed by EAB.”

Please contact Iowa EAB Team members to have suspicious looking trees checked. The State of Iowa will continue to track the movement of EAB on a county-by-county basis. Before a county can be officially recognized as infested, proof of a reproducing population is needed and an EAB must be collected and verified by USDA entomologists.