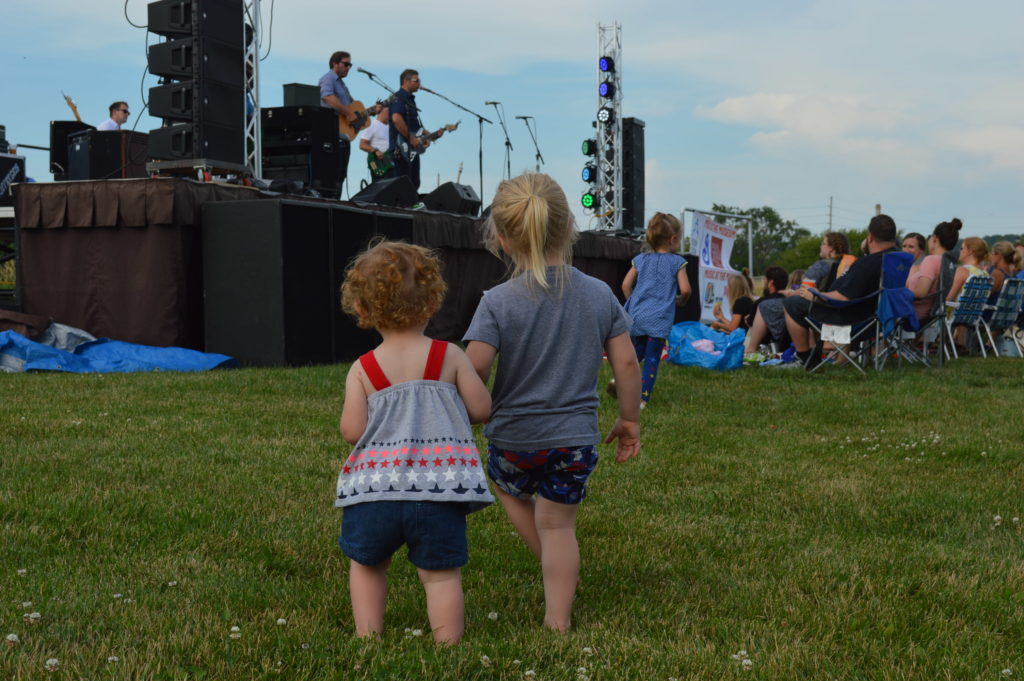 Children walk barefoot through the lawn of the National Czech & Slovak Museum & Library during a concert by The Nadas. The museum has joined the Good Neighbor Iowa effort, which seeks to reduce children’s exposure to lawn pesticides. (photo/Cindy Hadish)

The “perfect” lawn, free of weeds and thick with grass, grows with hidden costs.

Scientific studies show that pesticides – those weed killers, insecticides and fungicides applied to many lawns – are linked to a variety of chronic illnesses, neurodevelopmental and behavioral disorders and childhood cancers, such as leukemia. Additionally, some of the herbicides and other chemicals make their way to local streams, creating further environmental risks.

With that knowledge, the Center for Energy & Environmental Education (CEEE) at the University of Northern Iowa is taking action. The center kicked off a new public education campaign, called Good Neighbor Iowa, to draw attention to the issue.

“If we know something, we need to act on it,” says Enshayan, noting that premise underlies a broader campuswide initiative to turn science into action. “Right now, we’re ignoring those realities.” 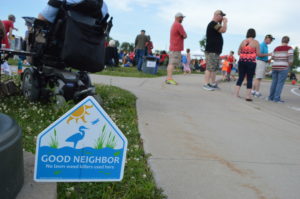 Students and faculty collected data to plan the Good Neighbor Iowa campaign, culminating in a kickoff event this spring, in which a park director, a family doctor and other speakers shared their insights on pesticide use and the harmful effects of pesticide exposure to children.

Enshayan says the campaign’s name was chosen to emphasize that a diversity of plants, in addition to grass, can create a healthy, “good neighbor” lawn. With minimal maintenance and regular mowing, lawns managed without weed killers are just as aesthetically pleasing as treated lawns, he notes.

An interactive media class created a website and other components of the campaign and a handful of students have been hired to continue work on the long-term project.

Enshayan compares the effort to the mindset behind cigarette smoking and the time that transpired to change the culture of smoking.

In that vein, key people, such as public health officials, are needed to promote the effort to reduce children’s exposure to lawn pesticides, he says.

In addition, the campaign involves school districts, park managers, child care centers and community leaders who demonstrate it is possible and practical to manage large areas of turf without using pesticides.

Enshayan describes local leadership across the state as key to the educational campaign’s success.

“Ultimately, our goal is to transform our culture so that we appreciate diverse lawns as a way to protect child health, water quality and biodiversity,” the Good Neighbor Iowa website states. “Remember, dandelions and violets will not harm anyone, but weed killers do. There is no justification to expose children to pesticides for cosmetic purposes.”

A UNI study estimated that 2,860 pounds of active ingredients, mostly 2,4-D, are sprayed on lawns in Cedar Falls annually, with streams often nearby. A map on the Good Neighbor Iowa website shows the neighborhoods where weed killers are applied in the city.

In a separate study, urban ecologists at the University of Massachusetts Amherst showed urban lawns left untreated provide a diversity of “spontaneous” flowers, such as dandelions and clover, that offer nectar and pollen to bees and other pollinators.

Researchers documented 63 plant species in lawns in suburban Springfield, Mass., which did not use chemical pesticides or herbicides, and collected 5,331 individual bees representing 111 species, of which 97 percent were native to North America.

Conserving native bees for their vital pollination services is of national interest, the study authors note.

Recognizing the importance of pollinators, the city of Cedar Rapids recently launched a 1,000 Acre Pollinator Initiative; a commitment to convert unused public land into prairie that is separate from the Good Neighbor Iowa initiative. 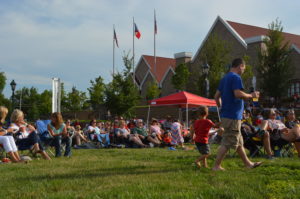 Cedar Rapids does not spray for insects in its parks, but uses herbicides as a targeted tool for sports turf management, invasive species eradication and other applications, Parks Superintendent Daniel Gibbins noted. The city had not committed to the Good Neighbor Iowa campaign as of earlier this year.

The Iowa City Community School District was one of the first entities on-board with Good Neighbor Iowa.

Dave McKenzie, deputy director of facilities management, says the school district has committed to keeping 189 acres of playgrounds and other areas free of pesticides, or about 45 percent of the district’s total acreage.

An integrated pest management program has helped in reducing the use of pesticides, with grounds manager Ben Grimm investigating creative alternatives to chemical use, McKenzie says.

Crews use overseeding – spreading grass seed over an existing lawn – as well as aeration, proper mowing and fertilizing to keep lawns healthy.

“You may see a few dandelions, but that’s not necessarily a bad thing,” McKenzie says, adding that the focus is on elementary schools. “The younger the children are, the more sensitive they might be to these chemicals.”

Just one month after starting, Good Neighbor Iowa already counted 2,300 acres committed to the initiative, with more than 20 entities on board, not including individuals.

The goal is to grow those numbers.

Enshayan is looking for local “champions” in each community who are willing to advocate for Good Neighbor Iowa, adding that one of the reasons he is excited about the initiative is that it is achievable.

“This is something we can do. No one in Washington is making us spray our school grounds,” he says. “It’s entirely up to us. We can change it. It’s entirely within our reach.”

2) Over-seed and add compost periodically. In Iowa, late August through September are the best times. Rough up bare areas and seed them.