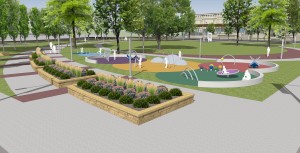 This preliminary design from OPN Architects shows a children’s play area and new planters at the corner of Greene Square Park at Fourth Avenue and Fifth Street SE.

CEDAR RAPIDS — Some of the mature trees in Greene Square Park will likely be removed under renovation plans, but Cedar Rapids Parks Superintendent Daniel Gibbons promised all would not be lost.

“We definitely see those large trees as important,” Gibbons said at a public forum Thursday, Feb. 28, at the Cedar Rapids Museum of Art.

The park could undergo a nearly $2 million transformation as early as this fall, depending on the progress of fundraising efforts and other work.

Gibbons said hackberries, ginkgo and massive sycamores are among species that will likely be retained in the park. 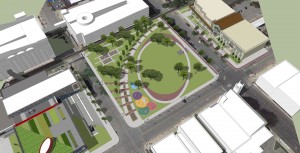 A central green space and curved walkway are among the features in the preliminary design plans for renovation of Greene Square Park in Cedar Rapids. (OPN Architects)

Little leaf lindens that are a favorite of voracious Japanese beetles could be on their way out under renovation plans because the beetles defoliate the trees in the summer, he said.

Gibbons noted that larger ash trees also are on the chopping block, as a preemptive measure as Iowa begins to see another invasive pest, the emerald ash borer.  The highly destructive insect has devastated ash trees in neighborhoods and woodlands throughout the Midwest in recent years.

Greene Square Park renovation plans began about one year ago, as leaders from the Museum of Art and Cedar Rapids Public Library decided to make improvements as work on the new library advanced.

The two buildings face one-another, with the park in the middle. The library is scheduled to open in late summer.

“Both boards felt the park was a little bit tired and ready for refreshing,” said the museum’s Sean Ulmer.

Bradd Brown, a principal at OPN Architects, who is assisting in the plans, said last night that fundraising efforts will begin soon to raise the $1.9 million estimated to be needed for site clearing, new construction and other components. That amount includes $250,000 for a new sculpture.

One of the 20 audience members at the forum asked why a fountain was not included in the design. Brown said a fountain was considered, but the study group wanted to keep the plans low-maintenance.

A children’s playground; splash pad; picnic area and open green space for concerts and other events are included in the preliminary design.

The diagonal walkway that cuts through the park would become a curved walkway and stone planters facing Third Avenue SE would be removed.

Denise Clark of OPN said the form of the design “will be dictated by existing trees.”
“We’ll definitely keep as many as we can,” she said.

Read about a mystery buried in Greene Square Park that might surface during renovations.