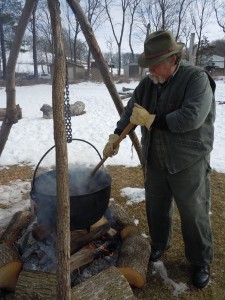 Volunteer Mike Duss of Cedar Rapids tends the pot Sunday, March 3, 2013, during the Maple Syrup Festival at the Indian Creek Nature Center. The Nature Center will celebrate 40 years of programs with a Ground Hog Gala on Feb. 1, 2014. (photo/Cindy Hadish)

CEDAR RAPIDS – The 40-year program history of the Indian Creek Nature Center will be celebrated with a free “Ground Hog Gala” this coming Saturday, Feb. 1.

Known for its trails, children’s programs, educational workshops, Maple Syrup Festival, HoneyFest, Nature’s Noel and more, the Nature Center was incorporated as a nonprofit in 1973, but a physical site had yet to be found.

According to the group’s history, studies found the best site was the Penningroth farm, now owned by the city of Cedar Rapids.  A lease for the barn and 120 acres of land was arranged and the Indian Creek Nature Center became the first nature center in Iowa. The first public program was held on Groundhog Day in 1974.

Here is more about Saturday’s event:

The Nature Center welcomes anyone to wear appropriate clothing for a free Ground Hog Gala celebration that will be held on Saturday, February 1 from 2-4pm. “We are celebrating the 40th anniversary of the very first Nature Center program led by first director Curt Abdouch on February 2, 1974,” said John Myers, Executive Director.

Ground Hog Gala will take place around a bonfire behind the Nature Center’s headquarters at 6665 Otis Road SE, Cedar Rapids. Everyone is welcome. Participants will enjoy a bowl of chili cooked on a cauldron over the fire. There will be marshmallows and hot dogs to roast over the fire and plenty of good cheer and the celebration will conclude with a nature walk led by Rich Patterson.

“We will have the woodstove going in the sugarhouse and the barn open for visitors to see a display of Nature Center history,” continued Myers. Admission to Ground Hog Gala is free.

The Nature Center was founded by BB Stamats and Jean O’Donnell in the early 1970’s. Inspired by the first Earth Day they assembled a steering committee of local citizens, and by 2003 it was incorporated as a private nonprofit corporation and was Iowa’s first nature center. Iowa now has many other nature centers but Indian Creek remains the only one not funded by tax dollars.

“Over the years thousands of people have volunteered to serve on the board and committees, lead programs, develop trails, restore prairies and wetlands and much more,” said Board President Rebecca Mumaw.

The Nature Center’s mission is to ensure a sustainable future by nurturing individuals in environmental education, being a leader in land protection and restoration, and encouraging responsible interactions with our world.

The Nature Center is funded by program fees, memberships, sales, grants, and distributions from its growing endowed assets, which are managed by the Greater Cedar Rapids Community Foundation. “It’s a remarkable organization. I can’t imagine Cedar Rapids without it,” continued Mumaw.