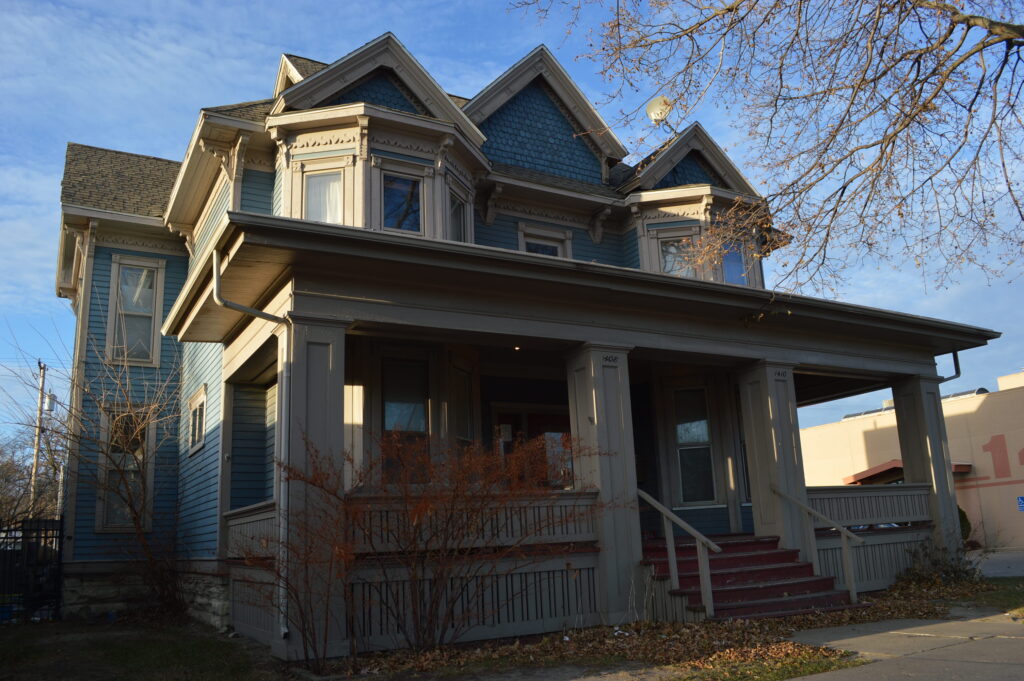 This former duplex could be saved from demolition if the Cedar Rapids City Council chooses to allocate assistance to moving it out of the way of a new development, but it appears the city is backing out of that commitment. (photo/Cindy Hadish)

NOTE: The City Council meeting is scheduled for 5:30 p.m. Tuesday, July 24, 2018, in the Council Chambers, third floor of City Hall, 101 First St. SE. Sign up to speak by completing the sign-up sheet in the back of the Council Chambers before the meeting begins. If you cannot attend, messages to the City Council can be emailed to:
cityclerk@cedar-rapids.org or call: 319-286-5060.

Months of work to save a historic building appears to be at an end, with staff of the city of Cedar Rapids opting not to recommend financial contributions to move the building out of the way of a new development.

The Cedar Rapids City Council could still potentially consider providing assistance for moving the building, at 1408 First Ave. NE, at its meeting this Tuesday, July 24.

A development agreement with H and V Development LLC for the construction of a three-story, mixed-use building at the corner of First Avenue and 14th Street NE will be considered during the City Council meeting at 5:30 p.m. 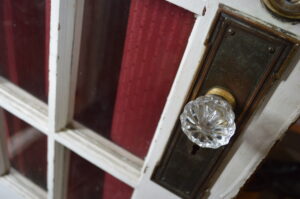 Original doors and other features remain intact inside the former duplex, which will likely be demolished. (photo/Cindy Hadish)

The agreement requires the developer to provide a total investment of at least $6 million in the building, with first-floor commercial (Jimmy John’s and Scooters Coffee) and 18 second- and third-floor residential units. Under the terms, the city would reimburse H and V’s gap financing of $1.1 million through tax increment financing over a period of up to 15 years.

Developer Brent Votroubek has been working with Coe College, with assistance from Save CR Heritage and others, to relocate the historic former duplex that currently sits on the property.

The city could help pay for some of the costs associated with the move under the agreement, but Caleb Mason, with the city’s Community Development Department, said today that is no longer being recommended.

“We have worked closely with Coe in an effort to save the structure.  They have indicated a willingness to dedicate land and take on the rehabilitation of the building,” Mason wrote in an email. “As we received the actual relocation estimates, the total cost for relocation and foundation, which would be borne by the City and Developer, has climbed to $140,000.   This cost far exceeds our original expectation of cost for the project.  In the absence of any other private dollars, this cost to the City was determined to be financially infeasible.  We have notified City Council of this finding.”

Coe College had planned to move the former duplex to property the college owns just behind the building’s current location, but because of the large size of the building, at 3,526-square-feet, and renovations needed to turn it into student housing, Coe requested financial assistance from the city to offset the costs. Without city assistance, the move will not be financially feasible for the college, Coe officials said, and the building will be demolished.

Most recently rented as a four-plex, the 1890s building was originally a duplex and home to Dr. Richard Lord, who kept chickens, horses and cows behind the house.

A young Grant Wood, who would later become the renowned artist of “American Gothic” fame, grew up in the neighborhood and helped Lord with the animals.

Historian Mark Stoffer Hunter said when Wood left church services to tend the livestock he would quip that he’s going to “milk the Lord’s cows.” The home is one of several on a Grant Wood Walking Tour in the Mound View Neighborhood.

While financial subsidies for developers, in the form of tax increment financing, have become standard for projects in Cedar Rapids, it is rare that incentives are offered to preserve historic buildings, other than state and federal historic tax credits.

Earlier this summer, Skogman Realty demolished three 1920’s buildings in the Downtown Historic District to make way for their new headquarters, while receiving $750,000 in redevelopment tax credits from the Iowa Economic Development Authority and $800,000 from the city of Cedar Rapids in the form of property tax reimbursement for the project.

Crews razed the former Albert Auto Service – a 1920s-era gas station – and the 1923-built Faulkes Building, a contributing structure in the historic district that most recently housed Sub City, and the historic Bever Building, constructed in 1923 as business headquarters of one of the founding families of Cedar Rapids, even as the State Historic Preservation Office noted that the demolitions would weaken the Downtown Historic District. 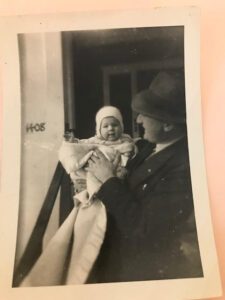 As an infant, Sylvia Popelka’s first home was in the former duplex, which had by then become a fourplex. She has advocated for saving the building and sent a letter to the City Council, which reads, in part:

“My family’s affiliation with Cedar Rapids began after my father returned from the Second World War. My parents moved from Ottumwa to Cedar Rapids in 1946 when my father became the manager of the Iowa, Paramount and Strand Theaters. Later, he managed the Memorial Coliseum and was involved with the planning and building of the Veteran’s Memorial Stadium during the late 1940’s. The house at 1408 First Avenue was my first home. I was born at St. Luke’s Hospital and my parents brought me to this home as an infant.

Rental housing was hard to come by at the end of the war. My father told me that there were long waiting lists for apartments. Luckily, he was able to convince Mrs. Hedges, apparently the owner, or manager, of 1408, that he and my mother would be the ideal couple for the lower unit. I have no real memory of living there, but photographs have given me a sense of what it would have been like. My parents did not have a car, so they walked or took public transportation where ever they needed to go. I know they walked to First Presbyterian Church, to a neighborhood grocery store, to the library, and to the homes of friends that were in that neighborhood. 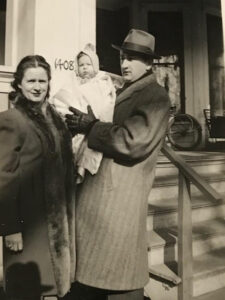 I understand that times and circumstances change, but far too many beautiful homes and commercial buildings have been destroyed under the false flag of “progress” Since the time when the unique architecture of both homes and businesses made Cedar Rapids, not just beautiful, but engaging and interesting, many of those beautiful and engaging structures have been torn down only to be replaced by non de-script, or ugly, parking lots, fast food restaurants, and housing with the flair of communist era apartments buildings.

Where do people go when they visit our city? To the places that hold our history and tell the story of Cedar Rapids. New Bo is a fantastic synthesis of the new and the old. It is one of the places I always take friends and family when they come see us. My guests also want to visit downtown Marion, Mt. Vernon, and Iowa City because of the interesting, historical homes and structures.”

Save CR Heritage has been raising awareness of at-risk historic properties in Cedar Rapids since 2012. Help continue this important educational and advocacy work by donating here. We can’t do it without you! 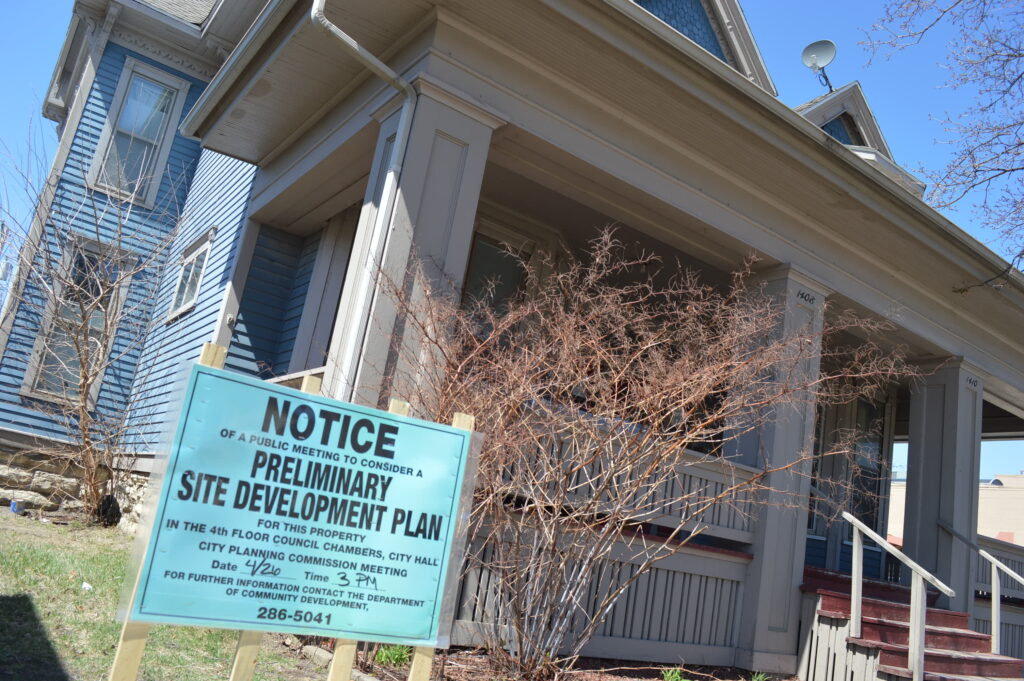 A notice is shown in front of the former duplex at 1408 First Ave. NE earlier this year. Save CR Heritage has been working with Coe College and others to save the building. (photo/Cindy Hadish) 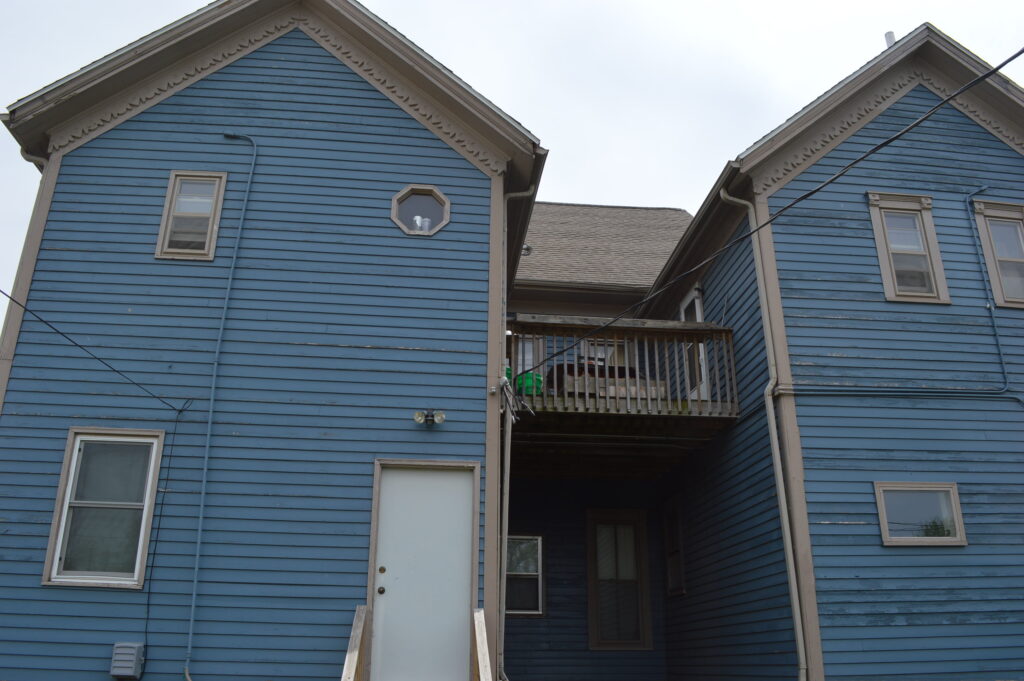