How to celebrate a zero-waste wedding 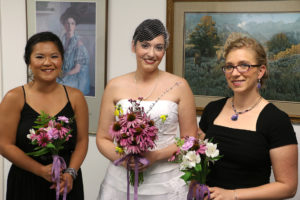 Olivia Dorothy took steps to celebrate a zero-waste wedding, including making her own bridal bouquets from native flowers. (photo courtesy Olivia Dorothy for the Radish Magazine)

Rather than directly embarking on their honeymoon, Olivia Dorothy and her husband, Damon Gray, spent their first day together as a married couple delivering food scraps to chickens on a farm.

The excursion was one part of the couple’s larger effort to have a “zero-waste” wedding.

Dorothy, 32, of Rock Island, Ill., associate director of the upper Mississippi River for American Rivers, had observed the party favors, decorations and other items that end up in the waste can after typical weddings.

“You look at it at the wedding and then it goes into the garbage bin,” she said. “I didn’t want that at my own wedding.”

Dorothy, who has worked in environmental advocacy for several organizations, had watched documentaries on zero-waste living and travel, the goal of which is to eliminate trash being sent to the landfill. Though she hadn’t seen it applied to weddings, she and Gray, 40, discussed the potential for their big day.

“Damon definitely supported it wholeheartedly,” she said. “It seemed like an interesting challenge to pursue.”

Numerous steps were taken to achieve zero waste, leading up to their wedding in July 2015. The couple bought electronic save-the-dates, invitations and thank you cards and set up a website that was mobile-responsive. The rare guests who weren’t internet savvy were phoned, so paper invitations did not have to be mailed.

They used spaces, including the brick Freight House in Davenport that didn’t need a lot of decoration “because they were beautiful on their own,” Dorothy said.

Dorothy borrowed a wedding dress from a friend and the bridesmaids wore their own black dresses. Their had their hair done at Pure Hair Studio in Davenport, which recently went zero waste and uses products free from petroleum oils, sulfates and other compounds considered environmentally harmful. Gray and the groomsmen wore their own suits.

Flowers to make the bouquets and boutonnieres came from friends’ gardens, with native purple coneflower holding up particularly well.

Decor doubled as favors for the guests, including lavender planted in mismatched pots purchased at garage sales and corncob jelly made by a local farmer. The jelly was a tribute to Dorothy’s grandparents, who produced and sold corncob jelly.

Guests familiar with their sustainable lifestyle used cloth or reusable bags in lieu of unrecyclable wrapping paper for the wedding gifts.

“A lot of people got really creative with it,” Dorothy said. “Very few gifts were wrapped in wrapping paper.”

They used cloth linens and real plates, silverware and glasses for the wedding reception.

Some hiccups occurred the day of the wedding. Instead of rice or bubbles, they opted to toss birdseed out of cups made from an old math textbook, tying into Gray’s math teacher profession.

“I’m sure the birds were happy with the seed,” Dorothy said, “but I had birdseed everywhere – in my ears, filling my veil – and would probably recommend going with a larger birdseed.”

And while Dorothy and Gray set up a display at the reception hall explaining how to sort waste, many of the 100-plus guests didn’t understand or pay attention to how to recycle. In hindsight, Dorothy said she would have paid the caterer extra to bus tables and sort the waste in the kitchen.

Overall, Dorothy cited eliminating food waste as their biggest accomplishment. Their caterer, Fresh Deli by Nostalgia Farms, is a farm-to-table operation that worked with their favorite local, organic farmers to prepare fresh, wholesome food for the wedding guests.

Dorothy’s mother-in-law delivered five trays of untouched leftovers to a local soup kitchen and her step-father-in-law took home about 20 gallons of recycling for the curbside and 5 gallons of compost. About 10 gallons was shipped to Terracycle, a New Jersey company that recycles or upcycles items such as wine corks that are non-food and non-hazardous.

In the end, only cupcake wrappers and toothpicks had to be discarded, with the total amounting to only a pint of waste.

Dorothy and Gray also enjoyed their trip to the country the next day to hand-deliver 10 gallons of table scraps to chickens at the Mad Farmers’ Garden.

“I felt so much better that I took the effort to do the extra work involved,” said Dorothy, who blogged about their zero-waste wedding at www.sierraclubevg.wordpress.com/tag/zero-waste. “A lot of the stuff I did is not exclusive to weddings. I hope people read it and learn some lessons on how to decrease their carbon footprint and keep stuff out of the landfills.”