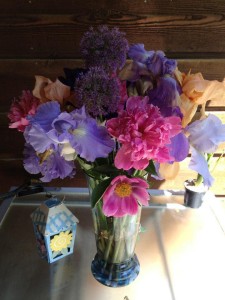 Some of the many bouquets picked from the property in southeast Iowa City are shown. (photo/Lara Cornick)

Iowa City gardeners are rallying around a property that has been home for decades to beautiful gardens, but faces development in the coming days.

Lara Cornick, whose parents have lived at the home, just outside of  town in southeast Iowa City, still hopes to save two pink sugar magnolia trees, but is in a race against the clock.

Heavy equipment is already scheduled to tear up the property Monday, April 13, so she is looking for a way to have them relocated today.

Her parents had rented the home for 36 years, building gorgeous gardens with a multitude of perennials that Iowa City gardeners have offered to help remove. 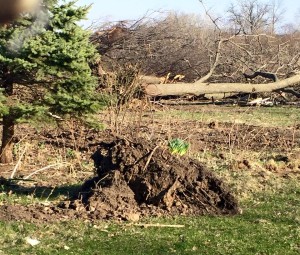 Trees are being torn out to make way for new development in southeast Iowa City. (photo/Lara Cornick)

Cornick said her parents never intended to move, but the property owner died, and the land was sold to a developer who is building condos there.

Initially told they had more time, Cornick said she drove past on Friday and trees were already being knocked down. She knows the clock is now ticking, but said she still hopes to save some of the trees that her parents had planted.