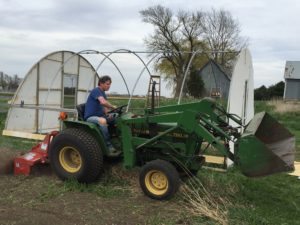 By Cindy Hadish/for the Radish Magazine

DEWITT – Switching from his corporate job to life on the farm has its challenges, but Anthony Troy has no regrets.

“It’s the best decision of my life,” says Troy, 36, who left his sales career in 2014 to move to the family farm in rural DeWitt, along with his fiancee, Lindsey Roggensack, 35, who also left her corporate position to take up farming.

That move wasn’t as much of a stretch for the couple as it can be for others hoping to make a living off the land.

Troy’s father, John Troy, owns the farm that has been in the family for generations and recently retired from John Deere. The family already owned farming equipment; something that can prove challenging for many farmers to afford.

“Most (beginning farmers’) concerns are about land and equipment and I had all that,” Anthony Troy says, “so I went ahead and made the leap.”

Both Troy and Roggensack grew up in the city, but to help make the transition, Troy went through a year-long extension program that covered topics such as hydroponics, growing in a high tunnel and more.

“It was very educational,” Troy says, adding that there is more involved in farming than the two originally imagined. “There’s definitely a learning curve.” 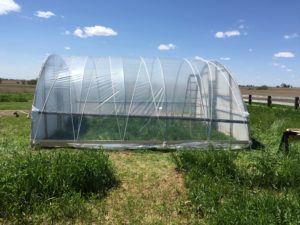 Troy Farms’ hoophouse was rebuilt this year after a tornado tore through the structure in their first year of farming. (photo/courtesy Anthony Troy)

One setback happened early on, when a tornado tore through the high tunnel – also known as a hoophouse – that they had built on the farm to help extend the growing season.

“It was kind of devastating, especially for the first year,” Troy says of the damage.

The high tunnel was rebuilt this year and is now where most of Troy Farms’ early produce is grown. The couple also built a greenhouse that is used to start seedlings and grow other plants and herbs.

While they are relative newcomers to the farmers market, Troy Farms already has a following.

Heirloom tomatoes, numerous varieties of herbs, beets, and peppers are among the items they sell, while the beef jerky has a following of its own.

As of now, Troy and Roggensack do not raise their own livestock. Troy picks up the meat on Wednesday, cuts and marinates it on Thursday, dehydrates it on Friday and brings it to market on Saturday.

“We’re usually sold out by noon,” he says.

Troy Farms also has an indoor booth year-round and with the help of the high tunnel, the couple hope to have produce to sell into January.

The four acres they farm is not yet organic-certified, but they follow organic practices and use non-municipal water on their vegetables.

“Everything is grown organically, from seed to soil to the water we use,” Troy says, adding that they hope to eventually achieve organic certification.

The dream they envision also would bring visitors to their farm.

They planted about 200 evergreens in 2014, and will plant more this fall, with the goal of offering Christmas trees for sale in the future. Additionally, the two planted pumpkins this year and hope to eventually offer hayrack rides, with a pumpkin patch and more.

“Hopefully, one day, we’ll have that fun family atmosphere out here,” Troy says. “That is the goal.”

Already, the two are enjoying their life on the farm. Troy grew up in Bettendorf, where his dad and mother, Sue, still live. He attended the University of Iowa and St. Ambrose University, graduating with a degree in broadcast journalism. He went into sales and once was awarded the Direct TV retailer of the year, “but it just wasn’t for me,” Troy says. 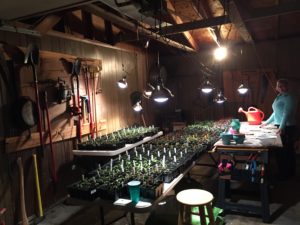 Roggensack also grew up in Bettendorf and had a 10 year career as a data specialist and retail account executive in Florida after graduating from Scott Community College. She returned to her hometown to be closer to her family and aging parents.

Currently, both work jobs off the farm, but would like to add more days at the Freight House, as well as other markets, and make farming their full-time careers.

“We are proud to grow healthy foods,” Roggensack says. “It has been a true blessing and extremely rewarding to give back to our community in a healthy way.”

Find more articles about healthy living in the Radish Magazine.