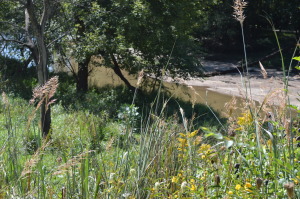 A statement released Oct. 10, 2014, by Iowa scientists notes the health effects of climate change on the state. (photo/Cindy Hadish)

We’ve long read reports about the increased spring rains, elevated chances for flooding and other issues that accompany climate change. A new statement by scientists in Iowa now spells out the human health effects.

Iowa scientists investigating climate change are concerned about new infectious diseases arising in the Midwest, as the organisms that carry them, such as new species of ticks and mosquitoes, move north due to rising temperatures.

The statement released today and signed by 180 Iowa scientists, representing 38 Iowa colleges and universities, noted their concern about the spread of  diseases such as the mosquito-borne Dengue Fever and Ehrlichiosis, transmitted by ticks. Increasing
temperatures, more rainfall, and longer summers allow the pests to live longer and expand their range, according to the report.

To read the Iowa Climate Statement 2014: Impact on the Health of Iowans, go to the website of the Center for Global & Regional Environmental Research or click here for the  report.