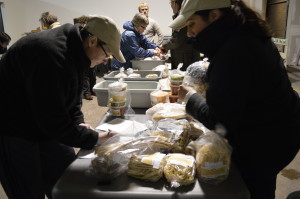 Food is sorted during an Iowa Valley Food Co-op distribution day earlier this year at its former site. The co-op moved this month to a new location at 201 Third Ave. SW. (photo/Cindy Hadish)

I’ve been following the progress of the Iowa Valley Food Co-op from when it was still just an idea and am excited to see their new site in the historic Kingston Village area of Cedar Rapids.

If you’re not already a member, consider dropping by on Dec. 18.

CEDAR RAPIDS — The Iowa Valley Food Co-op is operating out of a new site that will offer greater space in a more prominent location in Cedar Rapids.

As of December 1, the Co-op has relocated to 201 Third Ave. SW, a building purchased by Matthew 25 in the city’s up-and-coming Kingston Village area.

“We are excited about our new location and move,” said Jason Grimm, Co-Founder and Coordinator of the co-op. “This offers a more visible location and a chance to expand the relationship we have with Matthew 25.”

Grimm said the new site in the former Acme Graphics Building will provide more ample space for the co-op’s refrigerators and other equipment used during its monthly distribution days. 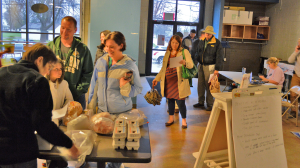 Customers of the Iowa Valley Food Co-op pick up their orders at the former Matthew 25 site in northwest Cedar Rapids earlier this year. The co-op’s distribution day will be at its new site beginning Dec. 18, 2013. (photo/Cindy Hadish)

The next distribution day, in which members pick up the food and other items ordered through the online Iowa Valley Food Co-op marketplace, is set for Wednesday, Dec. 18, from 4-7 p.m.

Members of the public and media are invited to attend to find out more about the new facility and about becoming a co-op member, with access to ordering seasonal vegetables, locally produced meats, cheeses and other products.

The co-op opened in August 2011 in its first distribution site at First Presbyterian Church, 310 Fifth St. SE, Cedar Rapids, and opens an online “shopping basket” on the first of each month for distribution on the third Wednesday.

For more information about becoming a member, contact Jason Grimm at (319) 622-3264 or see: www.iowavalleyfood.com

The purpose Iowa Valley Food Co-op is to increase the resiliency of the local food system in Eastern Iowa by developing the market, increasing the sale, and building the infrastructure for fresh, fairly-priced, sustainably produced food in our local region.