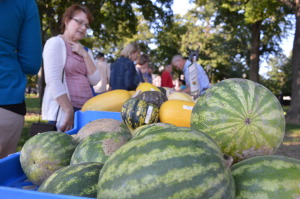 The final outdoor farmers markets of the season are fast-approaching.

Many markets ended their seasons last month, but nearly 20 in Eastern Iowa will continue for another week or so.

You can still find potatoes, cabbage, fall root crops such as beets, tomatoes, winter squash and more, along with locally raised meat, eggs, honey and a wide assortment of baked goods.

Market-goers in the Waterloo/Cedar Falls area are particularly fortunate, with a half-dozen farmers markets remaining open nearly through the end of October.

Iowa City has two markets open late in the season and the one I most frequent, in Hiawatha, also has another day left.

The Belle Plaine/Toledo/Tama area has markets remaining open, as do Oelwein, Monticello, Elgin, Dubuque and Muscatine. The “latest award” goes to Decorah, where the last farmers market of the season is set for Nov. 1, 2014.

Find details on all of these markets on the Homegrown list.