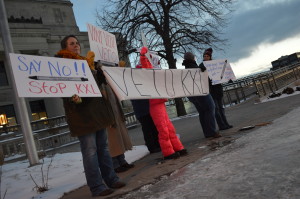 The Iowa Utilities Board will hear from both supporters and opponents of the Bakken oil pipeline during a hearing this week to decide if the pipeline is for the good of Iowa.

But an overwhelming majority of speakers who support the pipeline are coming from out-of-state. Of the 134 speakers scheduled in support of the pipeline – which will cut a diagonal swath from northwest to southeast Iowa if approved – 80 are not residents of Iowa. Rather, those supporters are coming from 10 other states: Nebraska, Kansas, Wisconsin, Arkansas, Indiana, Texas, Missouri, Oklahoma, South Dakota and many from Illinois.

Of the 144 opponents who will speak at the hearing, just three are from out-of-state. Interestingly, three speakers who are neutral on the subject also are on the list.

Gov. Terry Branstad has said that eminent domain should be considered if the Iowa landowners don’t wish to sell to the pipeline company.

See the complete list of speakers and find out more about the pipeline.