Making music at the market 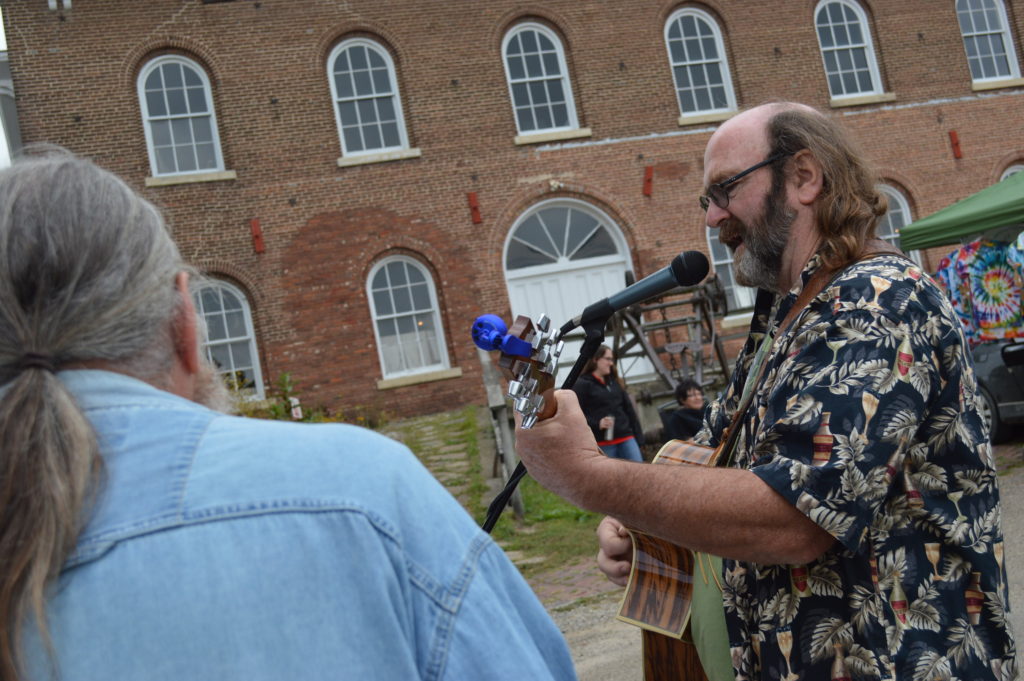 INDEPENDENCE, Iowa – Mark Armstrong missed the camaraderie he experienced as a farmers market vendor after ending his popular venture in cheesemaking with Acoustic Farms, a micro dairy in rural Springville. 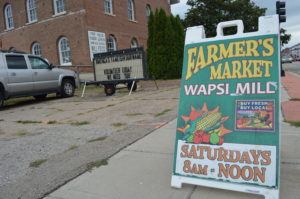 The farmers market in Independence, Iowa, is located outside the historic Wapsipinicon Mill. (photo/Cindy Hadish)

Armstrong has been able to keep strumming in those settings, though, even when his career path switched from dairy farming.

He is among the musicians who perform at farmers markets in Iowa, to the delight of customers, vendors and market masters who appreciate the added ambiance.

“It adds that atmosphere; it’s inviting,” said Sarah Kielly, market manager at the Independence Farmers Market, where Armstrong regularly performs. “It draws people in because everyone can relate to music.”

Kielly said she has heard from vendors who say the music adds to the enjoyment of the markets and in selling their products. Customers enjoy the performances, too.

Related: Historic mill is one of largest still standing in Iowa 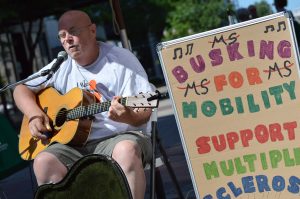 Musicians generally play for tips and sometimes are given a stipend.

Mark Brown has been “Busking For Mobility” for eight years at the Downtown Farmers Market in Cedar Rapids and also performs at the Hiawatha and Marion farmers markets.

Donations he collects go to the Multiple Sclerosis Society.

Brown plans to return to the markets next year.

Even as the outdoor farmers markets come to a close in Iowa, the indoor season begins and some of those venues include music at the market.

Armstrong hopes that is the case, as he looks forward to continuing the friendships he has formed.

He and Jeff Abbas, a Dorchester farmer, combined efforts to perform old-time favorites last month at the Independence Farmers Market. 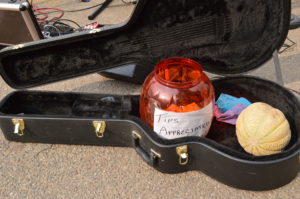 A 14-month-old girl bobbed to the music before her parents gave her money to drop in the open guitar case set up for tips.

While the tips are a bonus, Armstrong said performances have a more basic goal.

“It doesn’t matter about that,” he said of the money. “It’s about having fun.”

Indoor farmers markets in Eastern Iowa begin their season in November. Find details on locations, times and more on the Homegrown list. 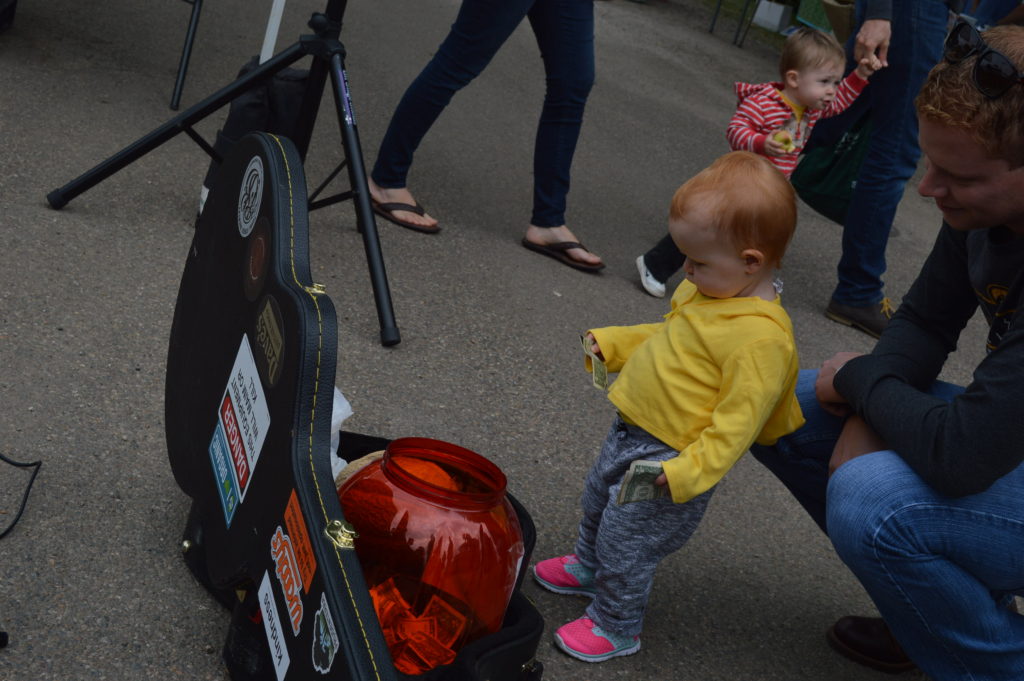 A young market-goer prepares to tip the musicians at the Independence Farmers Market in September 2017. (photo/Cindy Hadish) 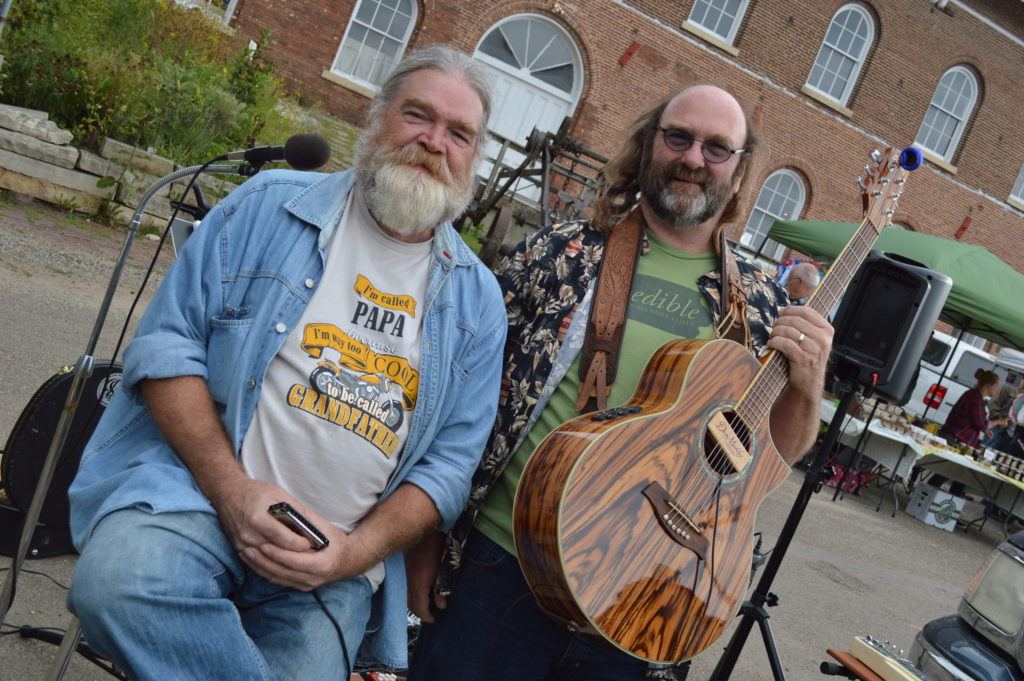 Jeff Abbas, left, and Mark Armstrong are shown after their performance at the farmers market in Independence, Iowa. (photo/Cindy Hadish) 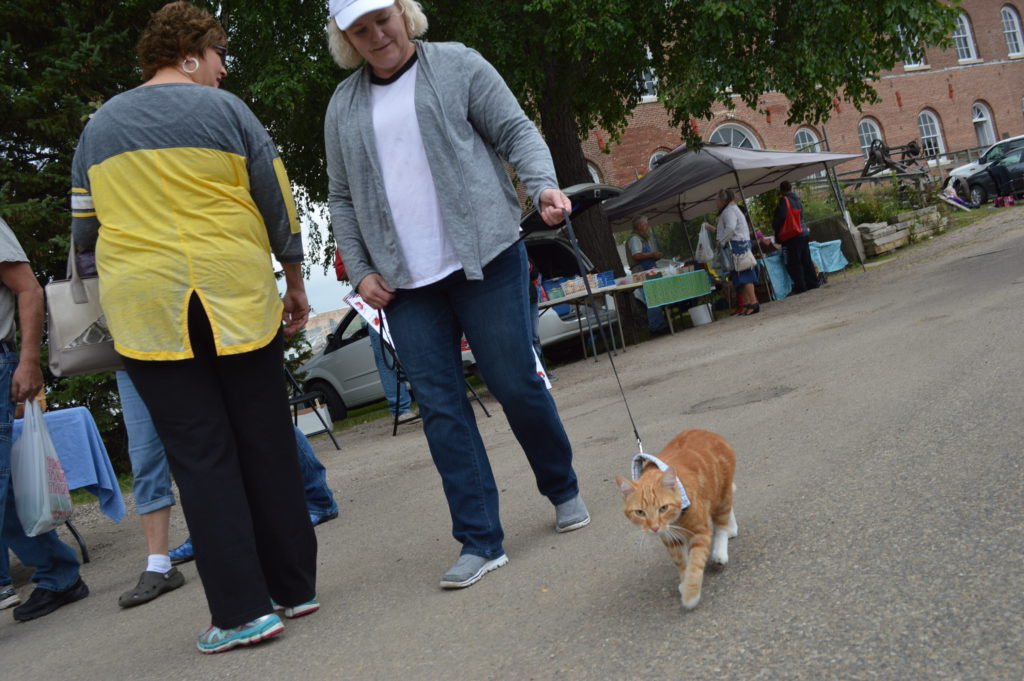 Bonus: cat getting walked at the farmers market in Independence, Iowa. (photo/Cindy Hadish)