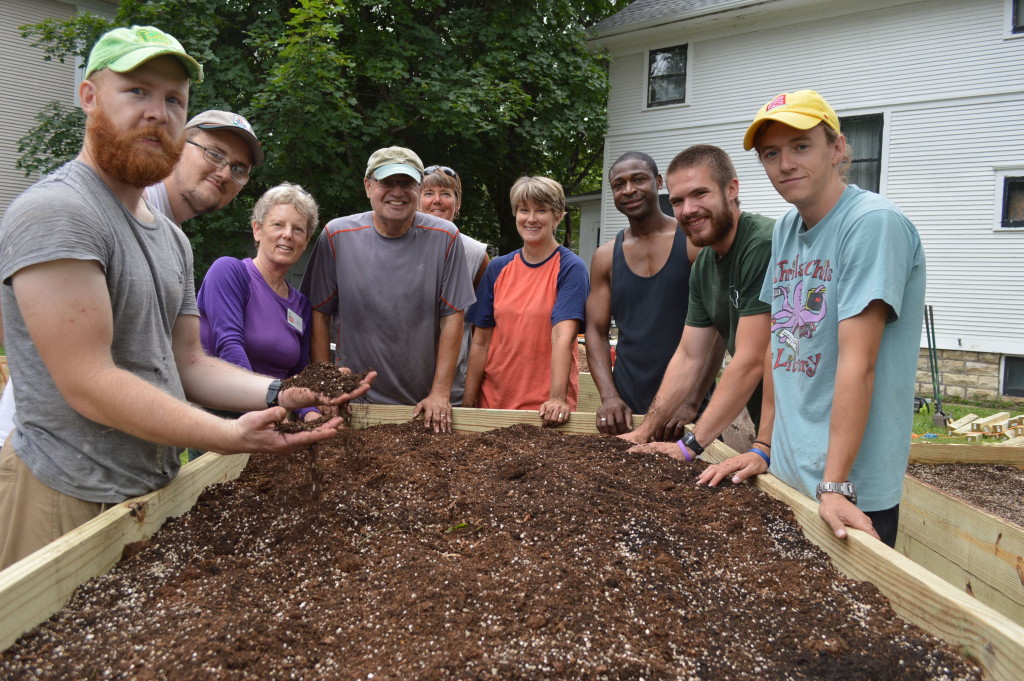 Some of the volunteers who worked on the new Wellington Heights community garden surround a new garden bed built Saturday, Aug. 8, 2015, in Cedar Rapids. (photo/Cindy Hadish)

CEDAR RAPIDS – Community gardens have a tendency to ebb and flow, but a new site in Wellington Heights has the potential for long-term growth.

A group of volunteers met Saturday, Aug. 8, to build raised beds for the new garden at the corner of Fourth Avenue and 15th Street SE.

The Wellington Heights Neighborhood Association gave up one of their favorite community gardens to allow a house to be moved to the lot from elsewhere in the neighborhood.

Save Cedar Rapids Heritage will move the late-1800s home from its current site at 1257 Third Ave. SE, to the spot of the Wellington Heights garden at 1425 Fifth Ave. SE. 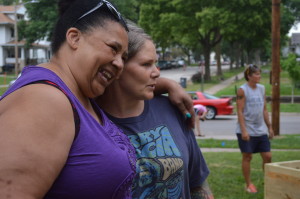 In exchange, the Affordable Housing Network Inc. agreed to donate the lot at Fourth Avenue and 15th Street SE, which was too small for the house, for a new Wellington Heights garden. 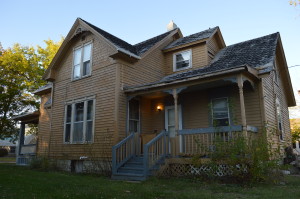 Save CR Heritage will move the “Frankie House” from Third Avenue SE to its new site in Wellington Heights later this month. (photo/Cindy Hadish)

The group came up with a plan for a series of raised beds on the property, including several that are wheelchair-accessible.

More than 20 volunteers from Save CR Heritage, the Wellington Heights Neighborhood Association, Green Iowa AmeriCorps, area residents and even a few passers-by constructed the beds Saturday and filled them with compost and a vermiculite/peat moss mix.

Some of the planting may happen yet this season.

“It has been a long time coming and we are excited it is here,” Karma said of the work day.  “I can’t think of a better way to come together as a community and get to know one another.” 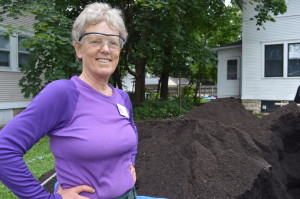 Save CR Heritage plans to move the historic home, known as the “Frankie House” to its new site later this month.

Home Depot is donating rock to be used in further landscaping of the garden site and a fence will  be erected.

Karma said a Rockwell Collins Green Communities grant and a grant from New Pioneer Food Co-op’s Soilmates will cover most of the cost of the materials, along with funding from the Neighborhood Association. Donations are being accepted for the remainder of the costs.

Find more information on the Wellington Heights Neighborhood Association website and see more images from the garden project, below: 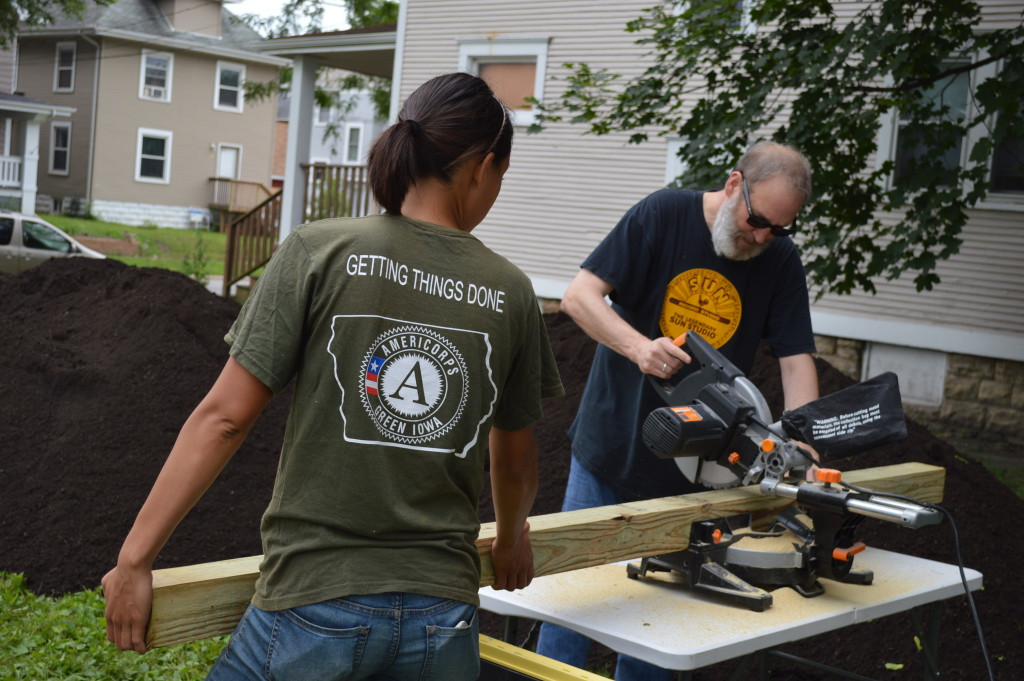 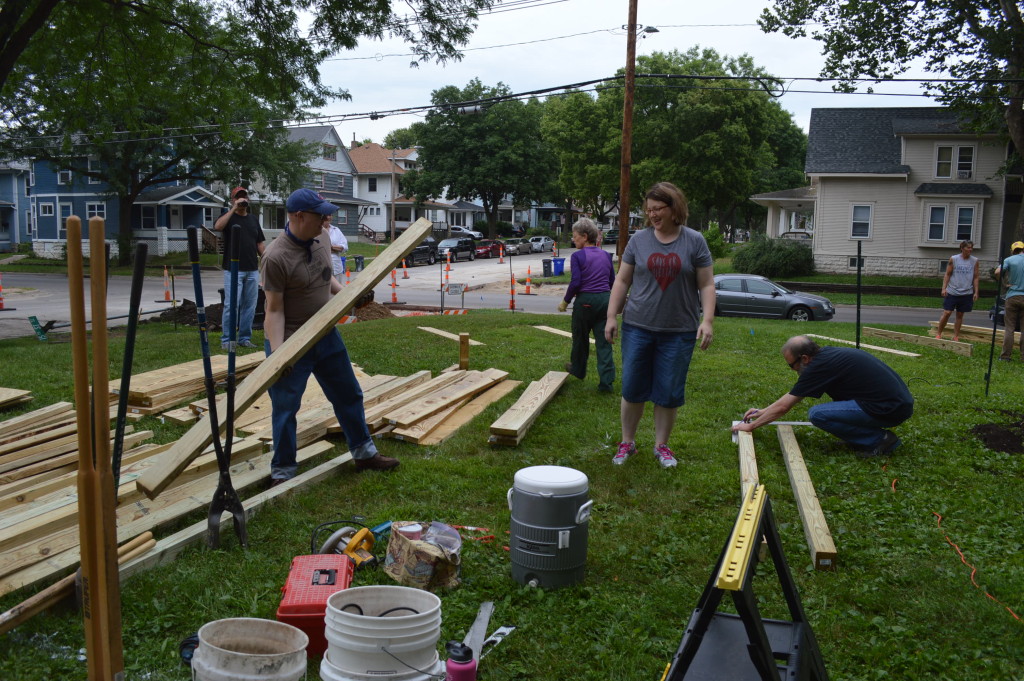 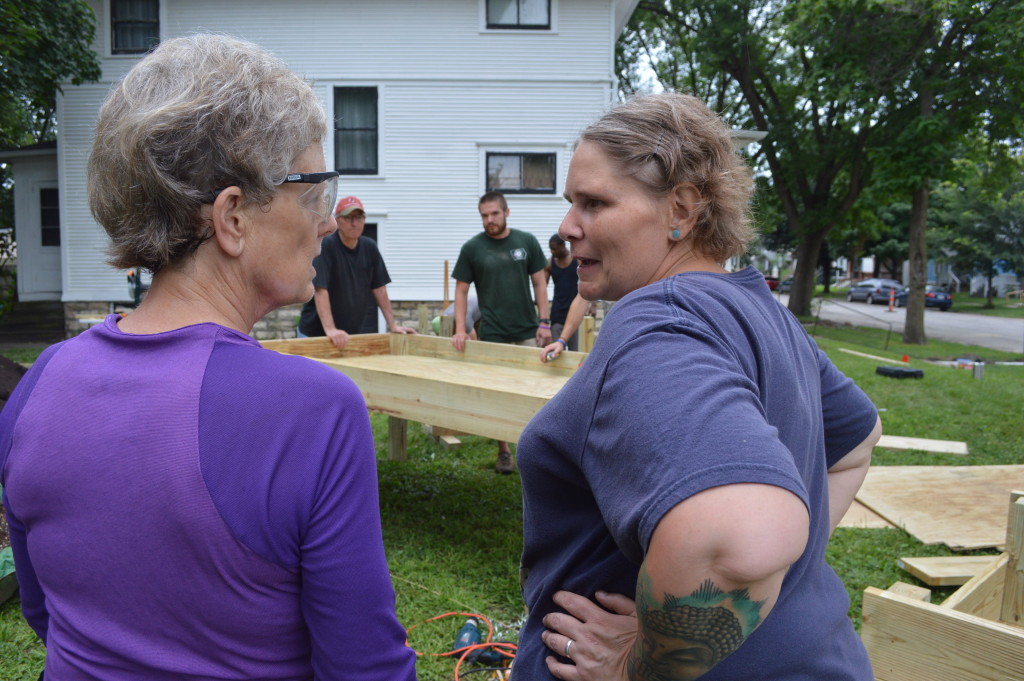 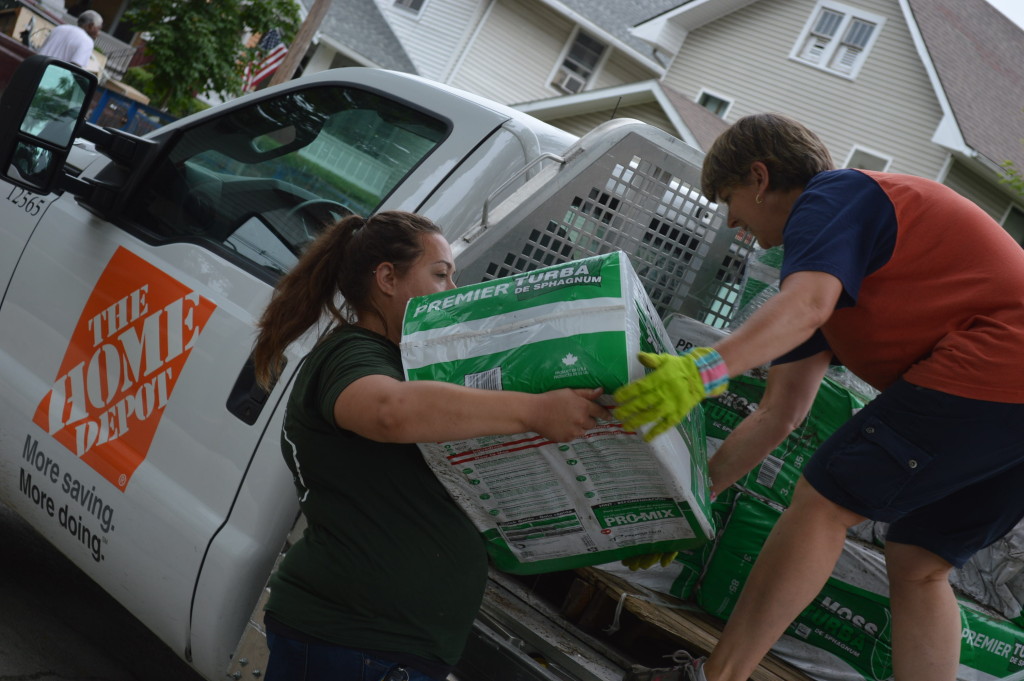 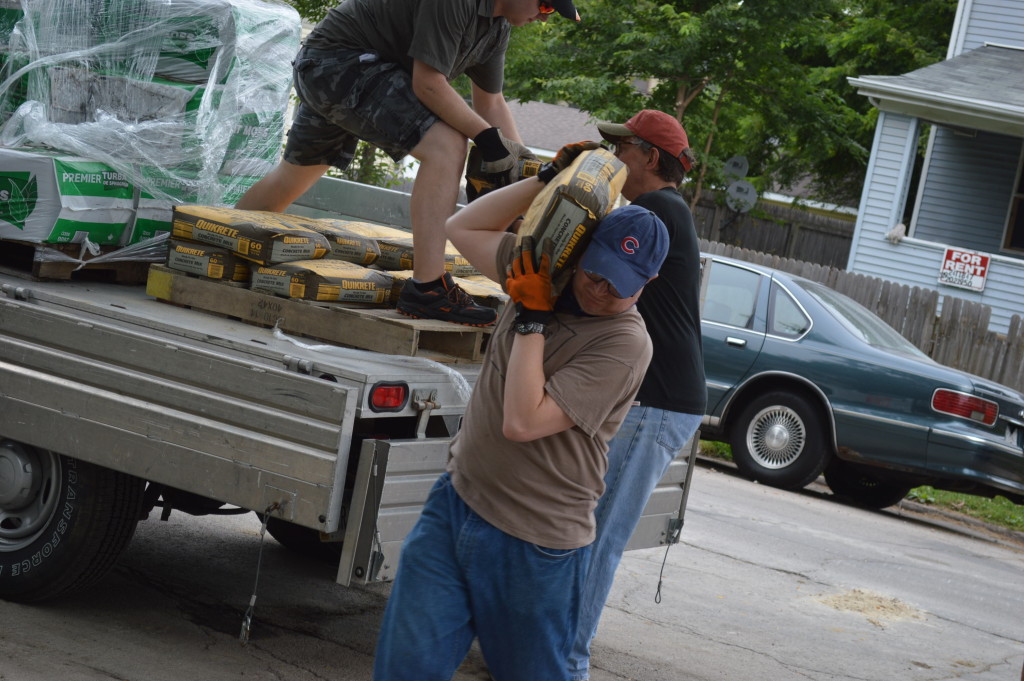 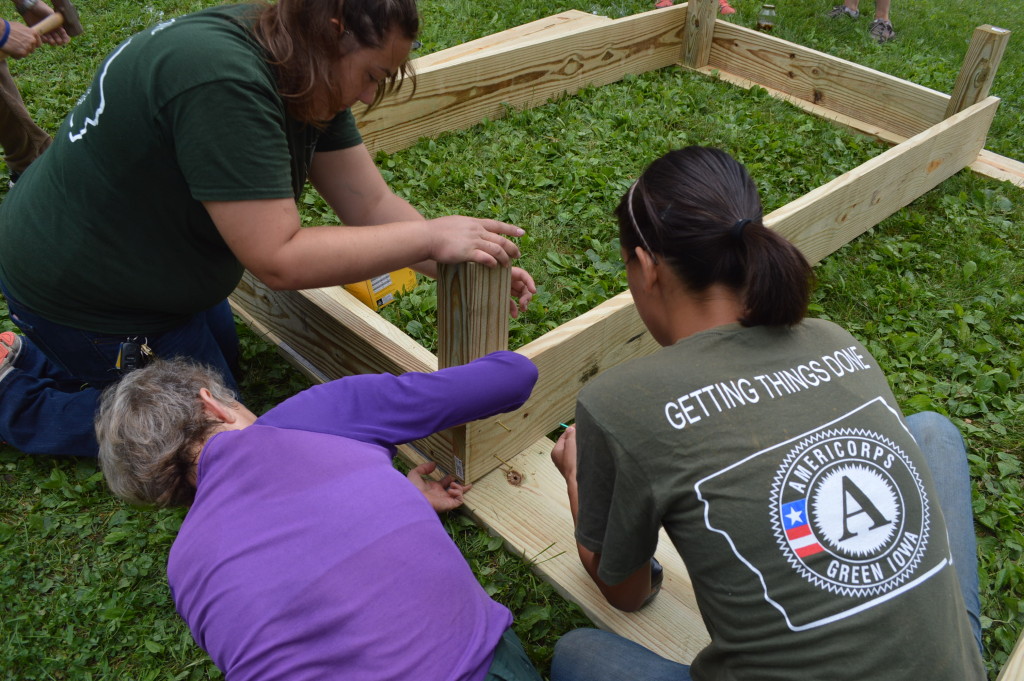 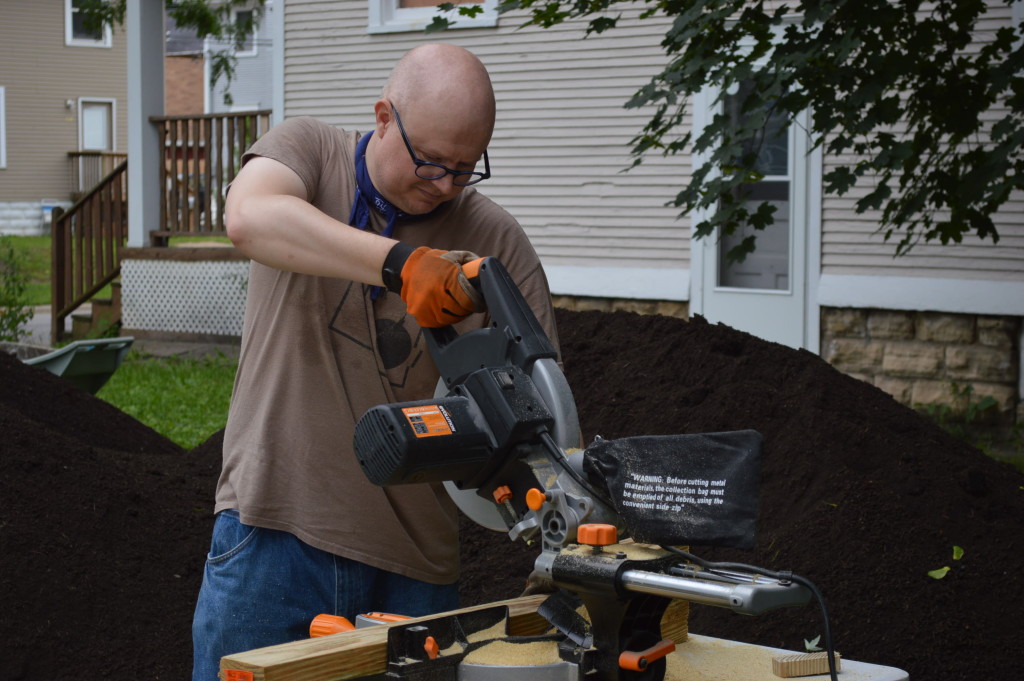 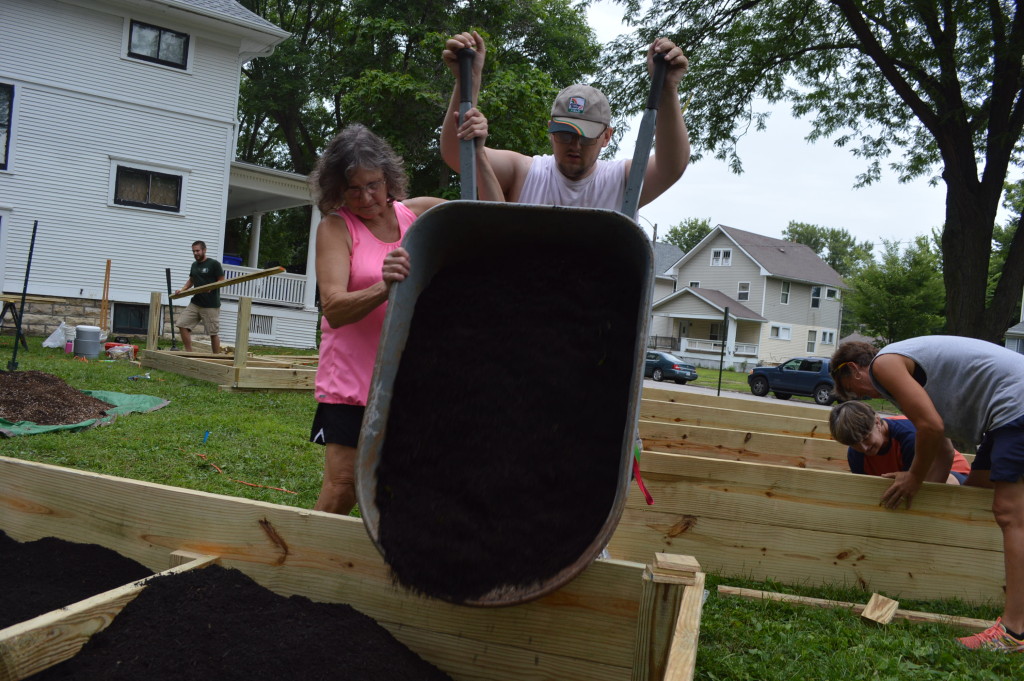