No surprise: drought threat diminishes in Iowa; eastern half of state receives 300 percent of normal rainfall 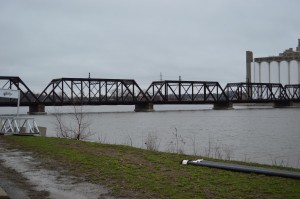 Water levels on the Cedar River rise in northwest Cedar Rapids as rain continues to fall on April 17, 2013. (photo/Cindy Hadish)

Today’s water summary update from the Iowa Department of Natural Resources may seem a gross understatement to residents of Eastern Iowa with flooded basements this week.

The DNR reported this week’s drought monitor continues the improvement trend that began in early March 2013. The area of the state no longer in drought is 35 percent – more than double the area from just one week ago.

Surprisingly, though, the state is somewhat divided, with a portion of west-central Iowa still experiencing shallow groundwater levels as of April 18.

Areas with the highest totals for precipitation thus far in April are in eastern Iowa, where totals have exceeded five inches for the month, or 300 percent of normal. The U.S. Geological Survey is currently reporting that the eastern half of Iowa is experiencing moderate flooding in a line from Dubuque to Chariton.

For a more thorough review of Iowa’s water resource trends April 4 through April 18 go to http://www.iowadnr.gov/watersummaryupdate.