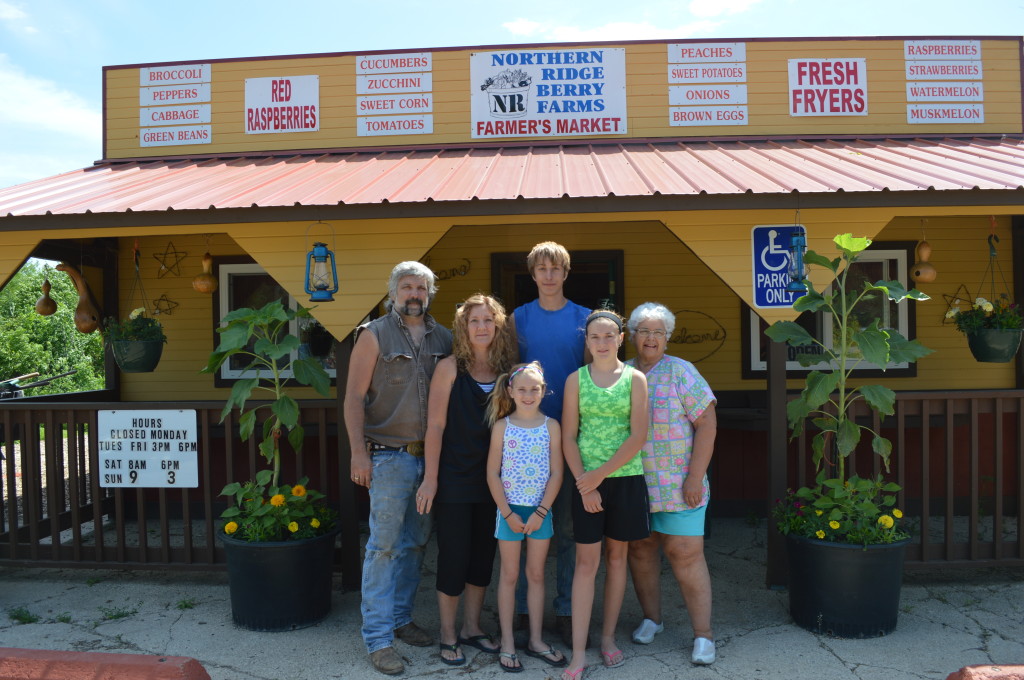 Members of the Lacina family, along with the farm’s foreman, Alex Larson, center, stand in front of the market shop they’ve built at Northern Ridge Berry Farm, near Oxford, Iowa. (photo/Cindy Hadish) 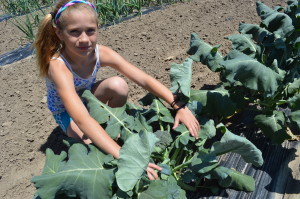 Dakota Lacina shows off some of Northern Ridge’s many vegetable plants at the farm in rural Oxford, Iowa. (photo/Cindy Hadish)

“We put close to 35,000 to 40,000 plants in the ground this year,” co-owner David Lacina said of the broccoli, Brussels sprouts, kale, peppers, onions and other vegetables grown on the family farm in rural Oxford. “People nowadays want to know where their food comes from.”

The list of restaurants that use their products is impressive, including such establishments as Bata’s Restaurant in Cedar Rapids, Augusta in Oxford, Ronneburg in Amana, Vesta in Coralville and Devotay in Iowa City, along with a dozen others.

Lacina noted that restaurants are only part of the mix. Northern Ridge also sells its produce to New Pioneer Food Co-op, the Clear Creek Amana and Iowa City school districts and is part of a pilot program at Hy-Vee stores through the Iowa Valley Food Co-op.

Nine co-op farm members are participating, Grimm said of the program, which features life-size cardboard cut-outs of the farmers at some of the stores.

Northern Ridge and other participating farms deliver Hy-Vee’s orders to the HACAP Food Reservoir in Hiawatha and HACAP then delivers the orders to each store as they make the rounds for food rescues.

“We try to have everything picked and delivered within 12 hours,” Lacina said. “The only way to get it fresher is to pick it yourself.” The farm offers that option, too, with “you pick” blueberries and raspberries.

Even while supplying the schools, restaurants and stores, their own farmers market shop, literally close to home, is where a good portion of Northern Ridge’s produce is sold. 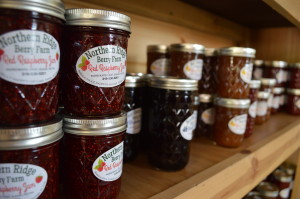 The jam sold at the store is made by Bonnie Lacina. (photo/Cindy Hadish)

Built over the course of the last few years and situated near their rural Oxford farmhouse at 2552 Cemetery Road N.W., the farmers market store has been an evolution.

“We put up a tent and started selling from it,” Lacina said of his family’s first intentions for their on-site farmers market. But when his mother, Bonnie Lacina, had health issues that necessitated air conditioning in the summer and heat during cooler days, the tent was replaced by a solid structure.

Because the structure fell under the category of a grocery store, issues with strict health department rules that called for an accessible bathroom and other requirements came into play, which led to another addition being built.

Bonnie Lacina, who grew up on the farm and is a co-owner with her son, can often be found inside the on-farm store and is responsible for the baked goods sold there on Saturdays, when the aroma of cinnamon rolls, kolaches, pies and cookies fill the air.

She starts at 2 a.m. to have the baked items available by 9, but that’s not her only role. The jams and jellies also are the product of her work, with 500 jars made this year.

Her favorite task, however, isn’t indoors, but in the fields when the raspberries are ripe.

“I pick from morning to night,” she said. “Once they come on, you can’t stop picking them. They’re beautiful.”

The farm has been in the family for more than 80 years, but it was just six years ago that the berry venture began.

David Lacina, who works full-time for McComas-Lacina Construction Company, was considering the future when his father sold the Iowa City-based construction firm. 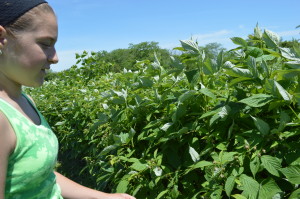 He started by planting 1.5 acres of raspberries and 500 blueberry plants and has gradually added vegetables, planted apples trees and more.

Last year, 6,000 pints of raspberries were sold by Northern Ridge, with the potential for at least twice that much this year, Lacina said. The farm’s strawberry plants succumbed to Japanese beetles, so strawberries sold in the store this year were brought in from another local producer as Northern Ridge tries to re-establish its beds.

The majority of the 400-acre farm is leased for conventional crops, but Northern Ridge uses natural practices for fruits and vegetables, which includes the use of neem oil, an organic insecticide that targets pests such as aphids.

While not organically certified – David Lacina cited the added expense of certification – the farm follows organic guidelines. A beekeeper who operates the farm’s hives stopped by on a recent day to discuss practices the farm uses to keep the plants bee-friendly.

Honey is among the items sold at the on-farm store, where everything is local. David’s wife, Penny Lacina, said farmers in the area are supportive of one-another, so the shop carries items such as butter, cheese, grass-fed beef and eggs from free-range chickens, all produced nearby.

A friend at P.H.A.T. Daddy’s in Marengo provided their first foray into the restaurant world, and now uses a multitude of peppers from Northern Ridge in its famous sauces. 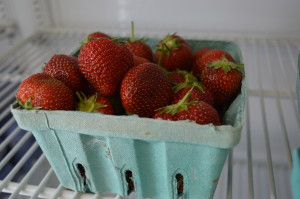 Strawberries sold at the market store this summer were brought in from another farm, after the Lacina family lost their strawberry patch to Japanese beetles. They are trying to start a new strawberry patch. (photo/Cindy Hadish)

The peppers – except the very hottest varieties – are among the vegetables sampled by a group of Brownies that David Lacina recalls as one of the more memorable tours of the farm.

Some of the young girls didn’t realize that potatoes came from the ground, he said, but by the end of the tour, everyone had tried not only peppers, but cucumbers, raw potatoes and garlic scapes.

“They were all drinking water really fast,” Lacina said, after they tasted the somewhat hot tops from the garlic plants. “But they all tried it.”

Those visits and special events, such as bicycle tours, are another arena the family enjoys, especially when customers can see where their food is grown.

Penny Lacina, who works full time at Rockwell Collins in Coralville, helps with planting and in the market store, while daughters Dakota, 8, and Cierra, 13, also help on the farm, particularly during “Weeding Wednesdays” when about 10 acres are weeded by hand and hoes.

They refer to the farm’s foreman, Alex Larson, as their “summer brother.” Larson began helping at the farm when he was just 11 years old and now will be investigating the next step for the farm as he takes college classes in business and agriculture.

“We’re going to try to close the gap between October and May,” Lacina said, with the potential for aquaponics or another indoor operation. “We’re still learning. With this type of business, you never quit learning or fighting problems.”

Even so, given the choice, Lacina agreed that his preference would be to work on the farm full time.

“I don’t know if that day will ever come,” he said with a wistful smile. “A guy’s got to have a vision.”