Parallels seen between flooding in Iowa and the Czech Republic 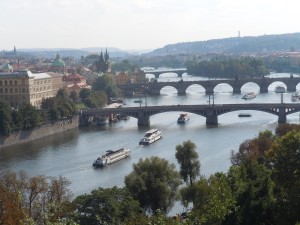 The Vltava River flows through Prague during more tranquil times in September 2012. Major flooding this June has led to eight deaths and forced evacuations in the Czech Republic. (photo/Cindy Hadish)

I remember interviewing Petr Kolar, the Czech Republic’s ambassador to the United States, just a few months after floods devastated Cedar Rapids and other parts of Eastern Iowa in 2008.

It was remarkable, I thought, that Kolar noted that good could somehow come out of something as tragic as the epic flood that inundated 10 square miles of Cedar Rapids. He based that prediction on experiences from his home country’s epic flooding in 2002.

“Tragic moments can be turned into something positive,” Kolar said during that visit to Cedar Rapids in 2008, citing many parts of the Czech Republic that were restored in better condition after the floods.

Now, once again, the Czech Republic is facing widespread flooding, with reports that at least eight people have died in floodwaters in that country, along with others in Europe.

I’ve been scanning news reports and photos of the flooding for familiar scenes after traveling to the Czech Republic last September to visit friends and learn more about the home of my ancestors.

The scenic countryside is reminiscent of Iowa, with rolling hills and farm fields, while buildings in many of the cities date back centuries. Those structures survived the 2002 floods in Europe and hopefully will survive this latest round.

Here is more about the recent flooding in the Czech Republic as well as other parts of Europe, from CNN: http://www.cnn.com/2013/06/05/world/europe/europe-flood/?hpt=wo_c2