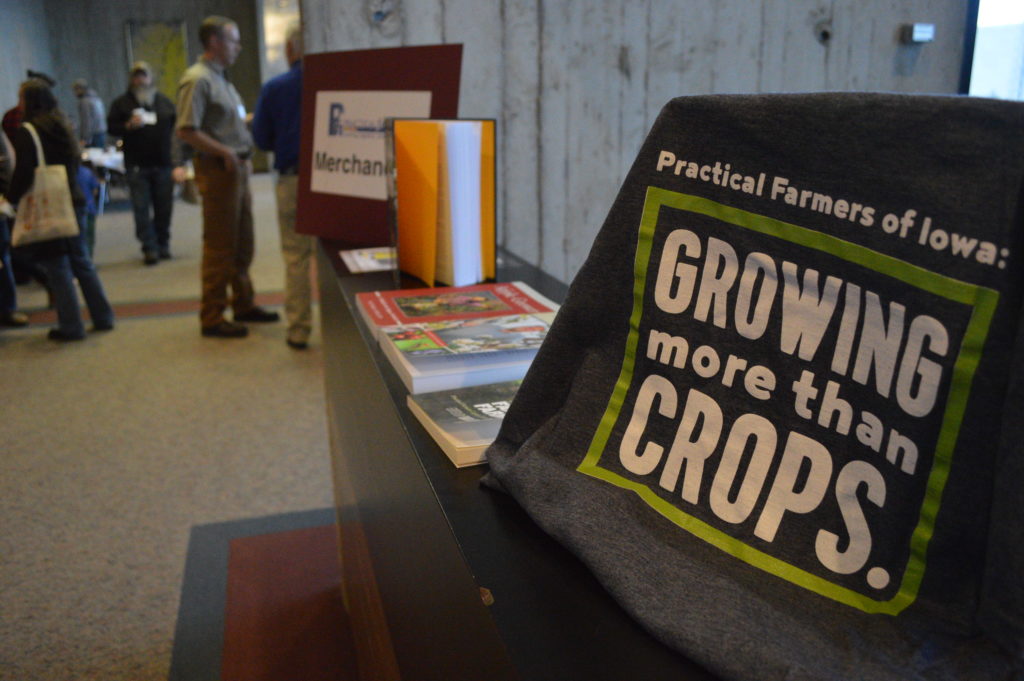 AMES, Iowa – Seasoned and aspiring farmers learned how cover crops can protect Iowa’s soil and water, brainstormed ways to revive rural communities and explored dozens of other topics during the 2019 Practical Farmers of Iowa conference. 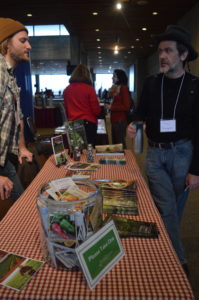 Seed Savers Exchange of Decorah was among the conference exhibitors. (photo/Cindy Hadish)

About 800 participants from throughout Iowa and beyond braved a winter snowstorm to join in the “Cultivating Connections” annual conference, Jan. 17-19 in Ames.

Founded in 1985, Practical Farmers of Iowa helps farmers incorporate agricultural practices that benefit the land and people and includes more than 3,500 diverse members, including both conventional and organic farmers.

Phillips pointed to cover crops and minimal soil disturbance among ways to reduce the need for fertilizer in maintaining soil health. 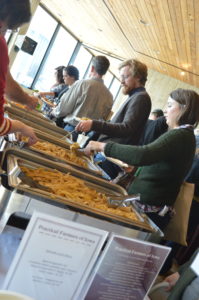 Conference-goers were treated to a local lunch and potluck dinner.

Throughout the year, members attend field days and workshops to learn from fellow farmers and meetups to share information and socialize.

Also during the conference, Practical Farmers of Iowa announced recipients of its 2019 Sustainable Agriculture Achievement Award as Doug Alert and Margaret Smith of Hampton.

The award is granted annually by Practical Farmers to an individual or couple that has shown dedication to sustainable agriculture, generously shared their knowledge with others and been influential in efforts to foster vibrant communities, diverse farms and healthy food.

Doug and Margaret have conducted numerous on-farm research projects over the years, sharing their findings through a variety of formats, and their work has been instrumental in helping other farmers find solutions to on-farm challenges.

See more photos from the conference, below, and read more about the award from Practical Farmers of Iowa: 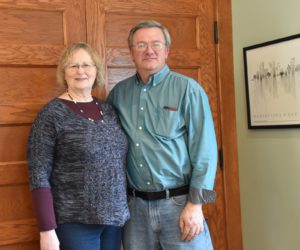 Doug and Margaret are long-time PFI members who operate Ash Grove Farm, a diversified, certified organic crop and livestock operation that includes organic feed corn and soybeans; organic seed soybeans, rye, hairy vetch and oats; and organic food-grade corn, soybeans and oats. They have used cover crops for years, and run a cow herd, marketing the calves through conventional markets. They also keep a fruit and vegetable garden, laying hens and bees for their family use.

The couple officially started transitioning the farm to organic in 1994, the year they married. But Doug had been experimenting with a more diverse crop rotation for years, as well as looking for ways to reduce pesticides and other inputs. Margaret, who works as a forage agronomist for Albert Lea Seed, and for many years worked with Iowa State University Extension, brought her agronomic expertise and livestock experience to the operation. Both shared a belief in the need to steward the soil and the land.

“When I relocated [the farm] in 1991, I was laying the groundwork for a longer-term, more diverse rotation,” Doug says. “For six years prior to that, I had been playing with it a bit, but was not able to have the flexibility to do what I wanted on that particular rented land. When I relocated, I had more opportunity to experiment.”

Experimentation has remained central to their farming philosophy. Doug and Margaret were early participants in PFI’s on-farm research through the Cooperators’ Program, and they have continued to be strong proponents of on-farm research and its role in farm decision-making, conducting numerous projects on their farm over the years and sharing their knowledge with others at field days, in research reports and articles, at conferences and through many conversations with people who have sought their advice.

In 2013, Doug and Margaret were among 11 farms to receive Practical Farmers of Iowa’s inaugural Master Researcher Award, which seeks to honor those who have made a significant contribution to on-farm research. Their research projects have examined everything from ridge-tilling and nitrogen fertilizer rates to strip-intercropping and ways to add cover crops into cropping systems that include small-grains crops.

“I think curiosity is really important to farm well, as is humility,” Margaret says. “Acknowledging that how we’re farming has flaws pushes us to ask how we are going to do it better.”

This drive to continually examine the sustainability of their farm practices – and their willingness to share both their successes and failures – are key reasons why PFI board member Vic Madsen feels Doug and Margaret deserve to receive the Sustainable Agriculture Achievement Award.

“In true PFI style, Doug and Margaret have helped me and many other PFI members with encouragement and advice,” says Vic, who runs an organic farm with his family near Audubon. “They are both walking encyclopedias – Margaret about agronomy and Doug about machinery – and more importantly, they are both very willing to share their experiences and any knowledge they have about farming.”

For both Doug and Margaret, the decision to operate an organic and increasingly diversified farm was partly philosophical, partly practical. Guided by a belief in stewarding the soil, Doug already had a longer-term crop rotation in place and had been working to reduce inputs when an opportunity presented itself for the couple to convert some acres to organic.

“A local businessman who was exporting soybeans to Japan said he needed more product,” Doug recalls. “He said you’re just one step away from being able to certify organic on your land, so I said okay, I’ll try it.”

While the decision offered a way to access a new and potentially profitable niche market, the move was in also line with the couple’s shared ethic of land stewardship. Margaret, who grew up on a diversified crop and livestock farm south of Des Moines, credits her father – who she says “was a strong advocate for soil conservation, and for appreciating the natural world around us” – with instilling in her a conservation ethos.

Doug also acknowledges a family influence. His parents farmed until he was four years old before moving to an acreage near Mason City, where his mother, who continues to be an avid gardener, always had copies of the Rodale Institute’s Organic Gardening and Farming magazine around the house.

However, he says the “ah-ha moment” when he fully grasped the link between soil health and a more diverse crop rotation wasn’t until college, when he found a copy of Rodale’s New Farm Magazine in his dorm mate’s trash can. He was so captivated by the articles, he went to ISU’s Parks Library to see if he could find more.

“Lo and behold, they had every back issue,” says Doug, who started farming on a small scale in middle school and had continued to farm part-time through college. “Needless to say, I missed supper that night.”

PFI co-founders Dick and Sharon Thompson, of Boone – who practiced a sustainable, low-input approach to farming, guided by rigorous on-farm testing and research – were frequent contributors to the magazine. “What they were doing just made sense,” Doug says. “The next September, I went to their field day. I was so sick I could hardly walk, but I went anyway, and I became friends with Dick and Sharon over the years.”

Margaret was likewise strongly influenced by the Thompsons and their, at the time, radical message of using on-farm research to help improve farm profitability, efficiency and stewardship. “I remember Dick coming to speak to our agronomy club when I was an undergraduate at Iowa State,” Margaret says. “People were pretty skeptical of Dick, but I thought, ‘what a cool guy, what a cool farm!’”

Doug and Margaret each started following the work of Dick and Sharon, and then participating in the fledgling organization the Thompsons had helped start to connect farmers seeking practical, sustainable solutions to their farming questions. Their best “Thompson” experience? “We met at one of Dick and Sharon’s field days,” they say.

They credit the Thompsons – and the connections they made within the PFI community – for setting them on the path to where they are today.

“Practical Farmers of Iowa has been instrumental in the development of our farm,” Margaret says. “Since Doug starting farming without an existing family farm operation, PFI was a critical part of our community that helped us explore our options. Transitioning to organic was done when others in PFI were doing so, too. We were not out here all alone.”

“Wendell Berry was the keynote speaker for PFI’s 10th-anniversary winter conference,” Doug adds, referring to the renowned agrarian writer and philosopher. “He came because of his interaction with the Thompsons – and called PFI members ‘Dick Thompson’s people.’ When I look back at the integration of our lives and PFI, it’s pretty staggering.”

As they look toward the future, Doug and Margaret see new challenges in the form of changing weather patterns that will require them to adjust some of their farming practices. They have also started to ponder the question of farm transition and the future of the farm once they are no longer farming the land.

The couple have two grown sons, Robert and William, who aren’t sure if they want to farm. Margaret also notes that the more they’ve learned over the years, the more questions they have. “We’re probably less certain now that what we’re doing is sustainable than we were 20 years ago,” she says. “I hope that’s wisdom – to acknowledge our lack of certainty and to continue to seek answers.”

Confronting these questions has reaffirmed their belief in the importance of sharing their knowledge with others.

“That is the Holy Grail of sustainability,” Margaret says. “Because whatever you do in your lifetime, it doesn’t take too long to undo if you rent your land to somebody who will vastly simplify the agroecosystem you have fostered. You can’t maintain what you do on your farm with policy, rules or leases. You have to maintain it by impacting people who, you hope, share your values and want to farm – not necessarily in the same way – but with similar objectives and respect for the land.” 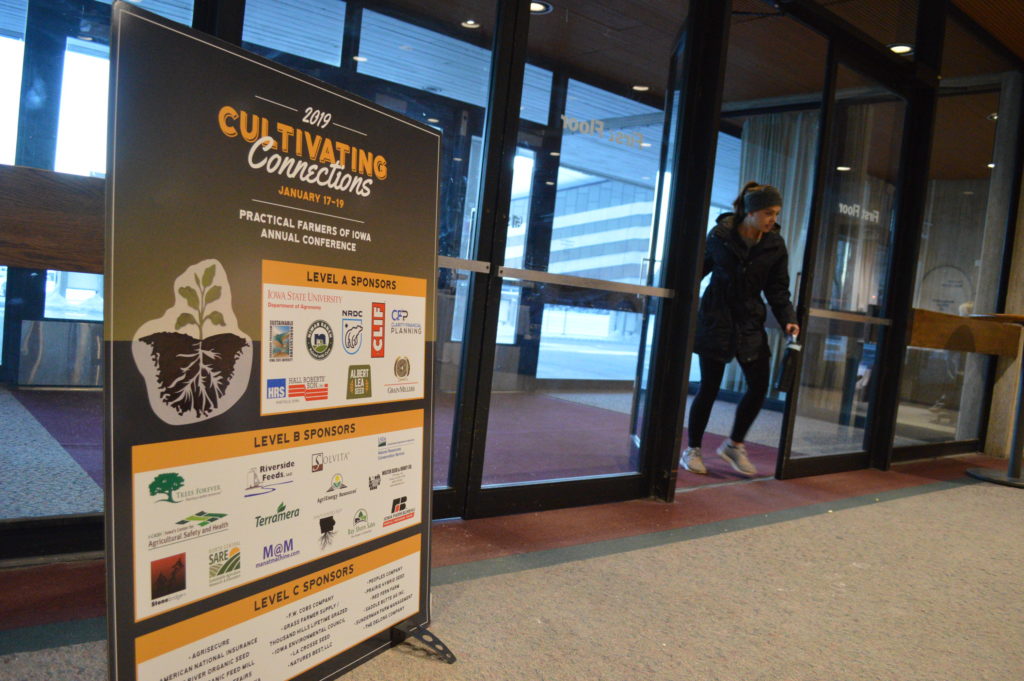 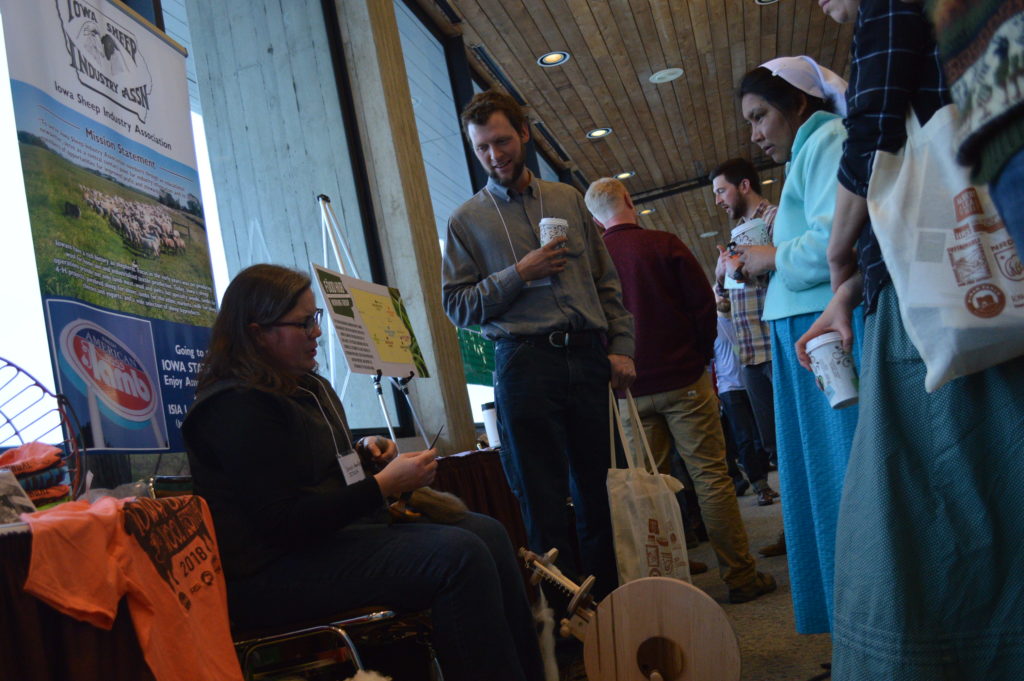 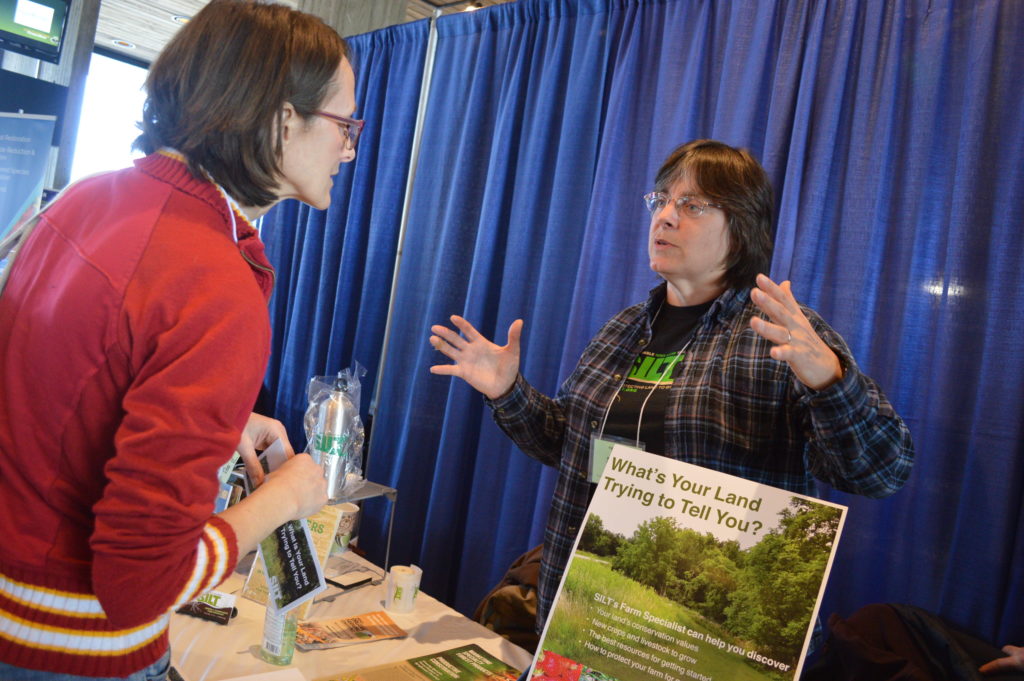 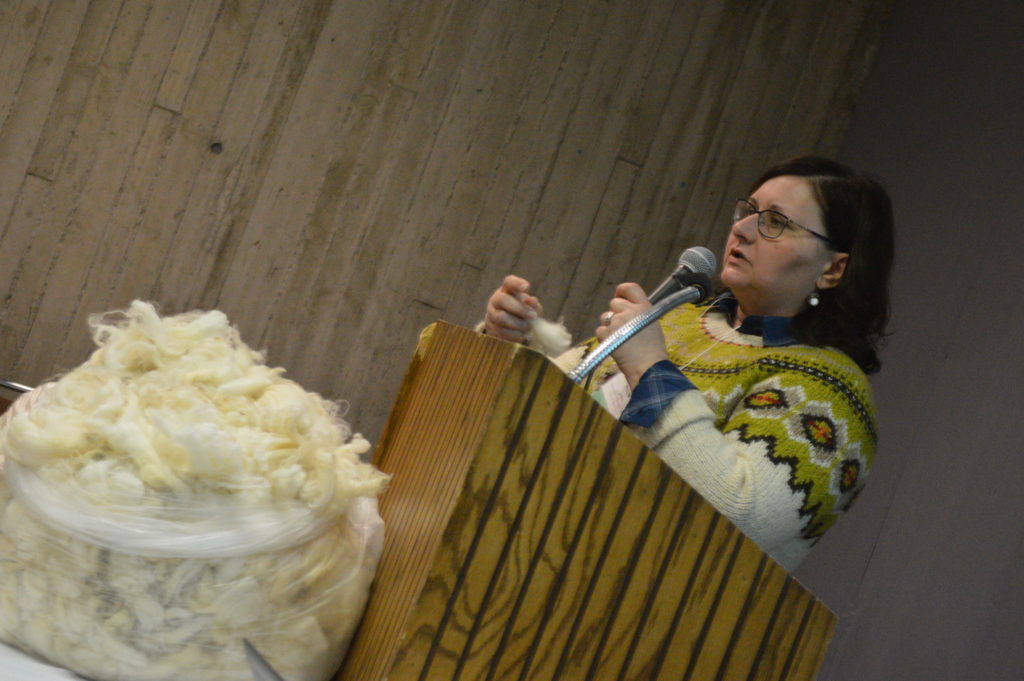 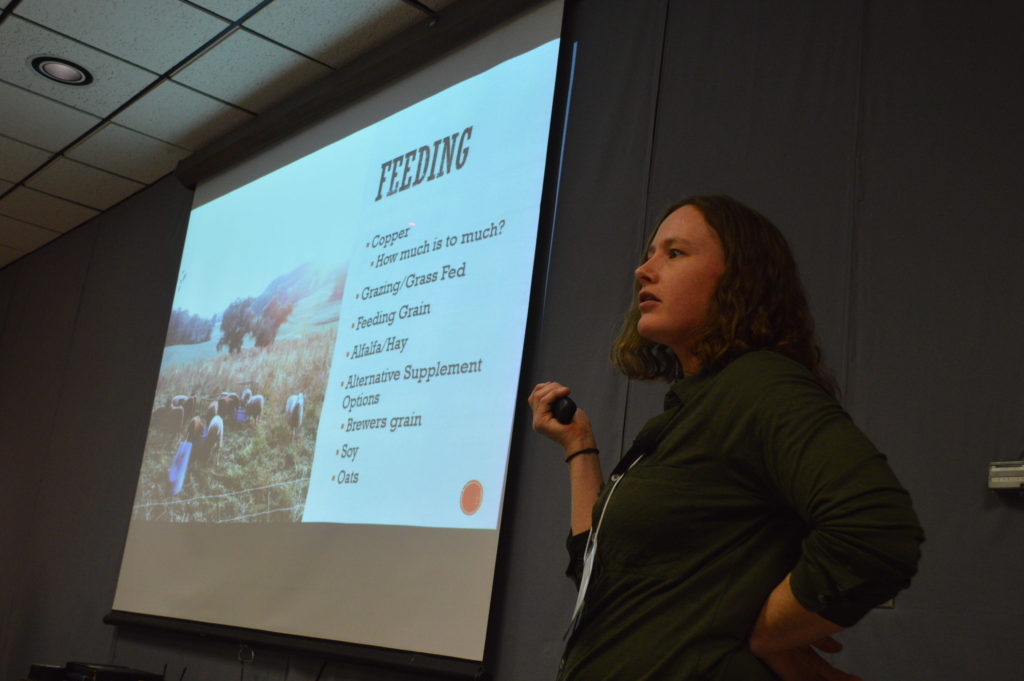 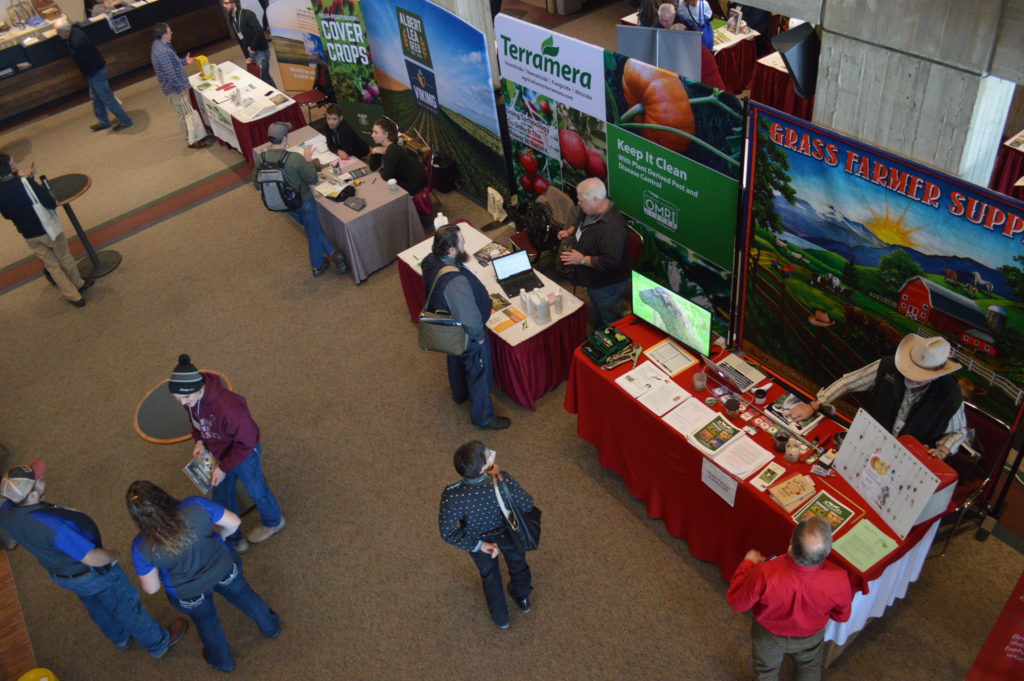 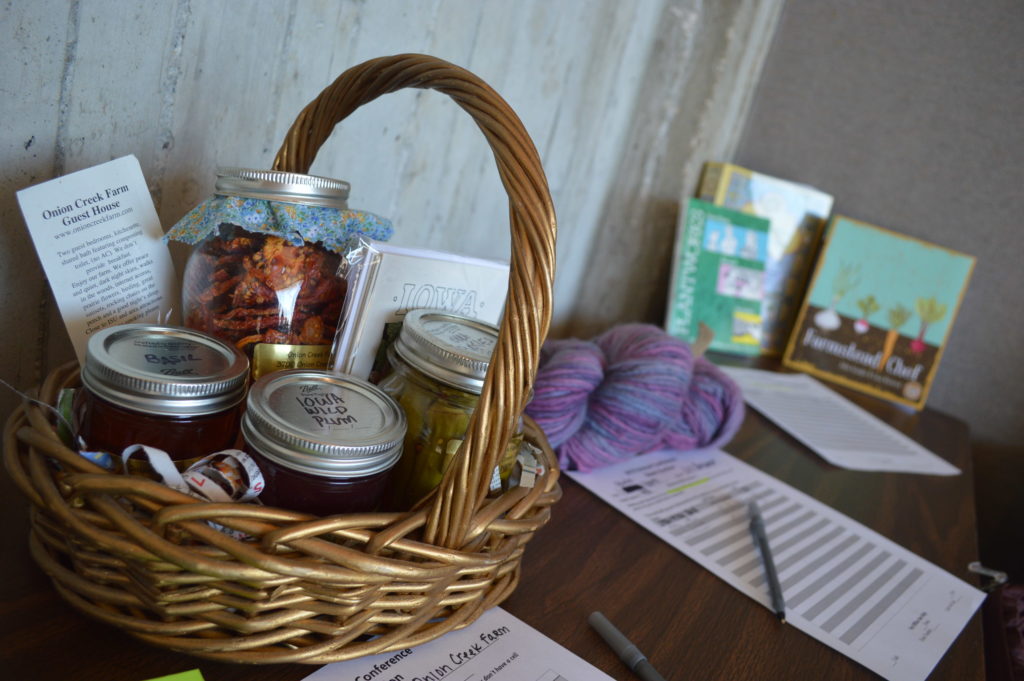 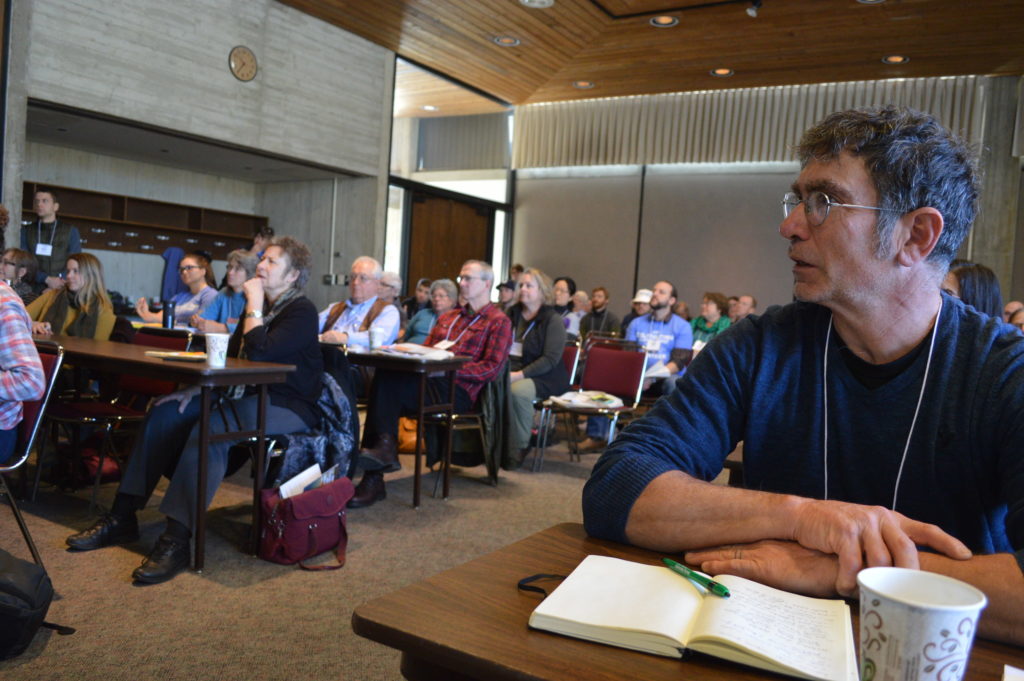 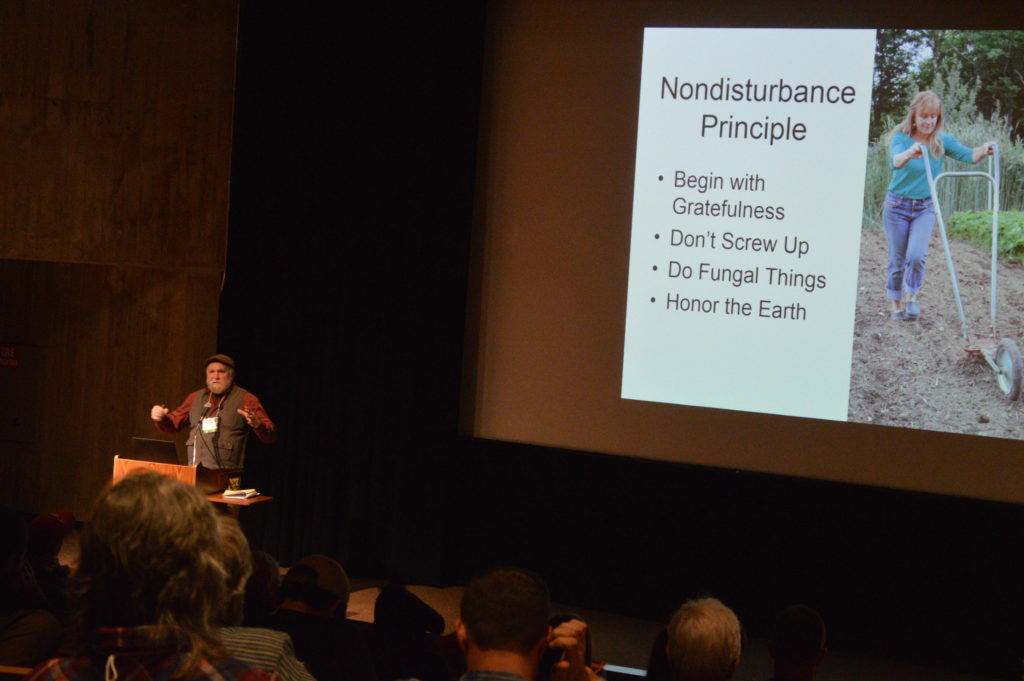 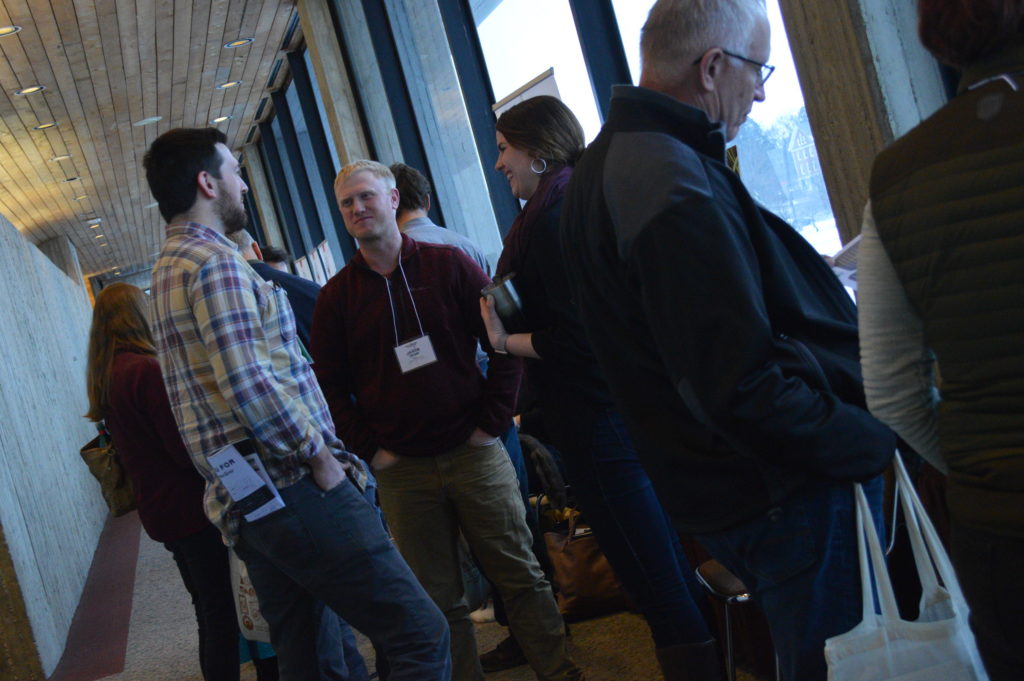 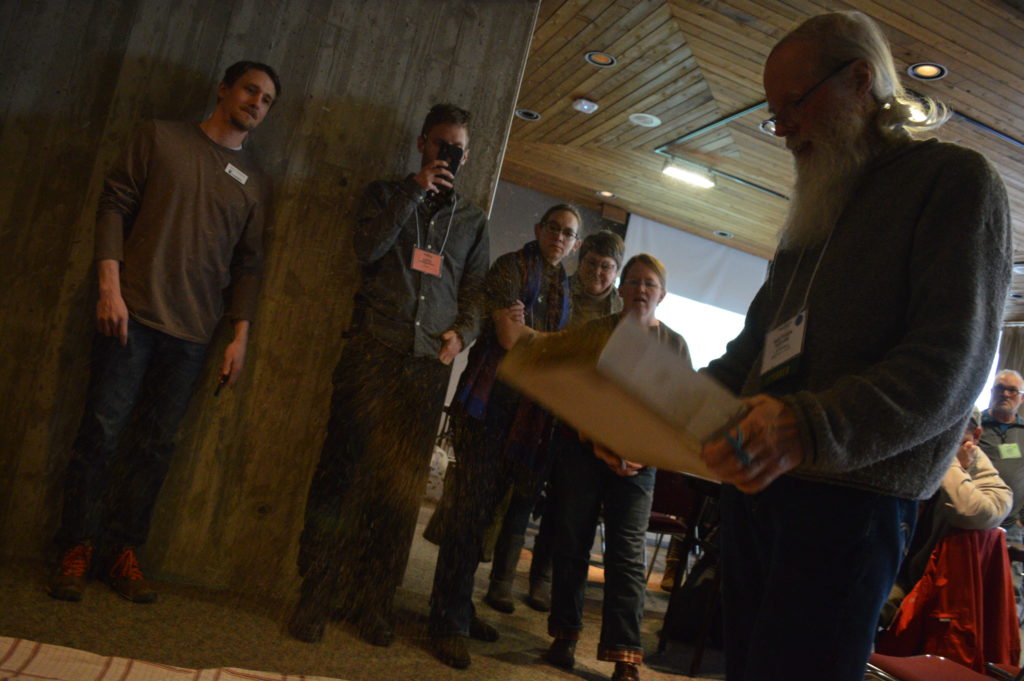 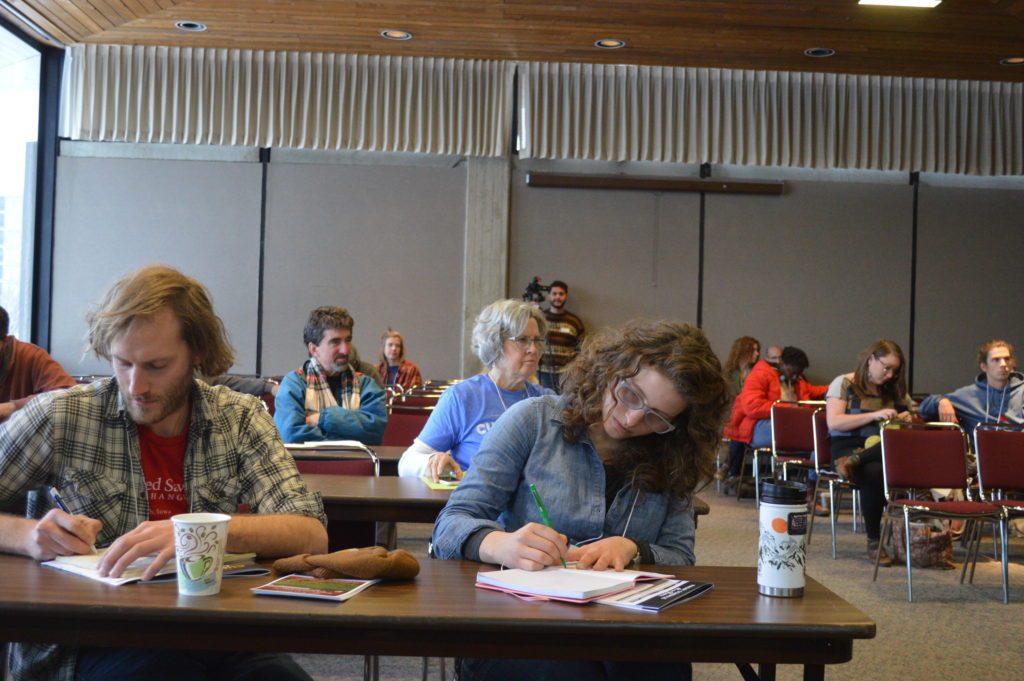 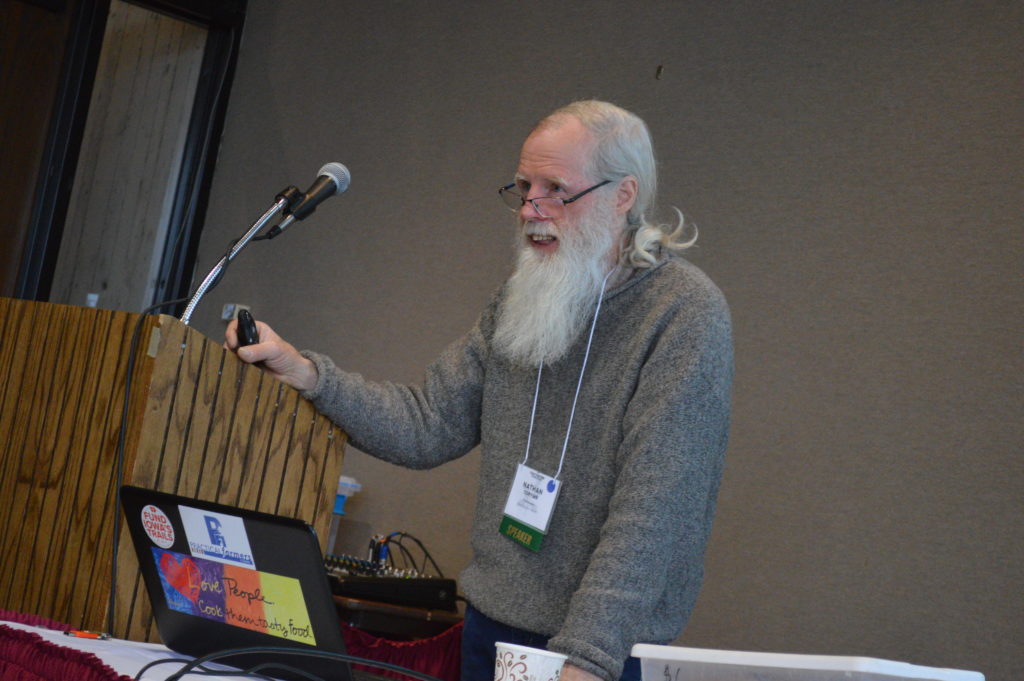 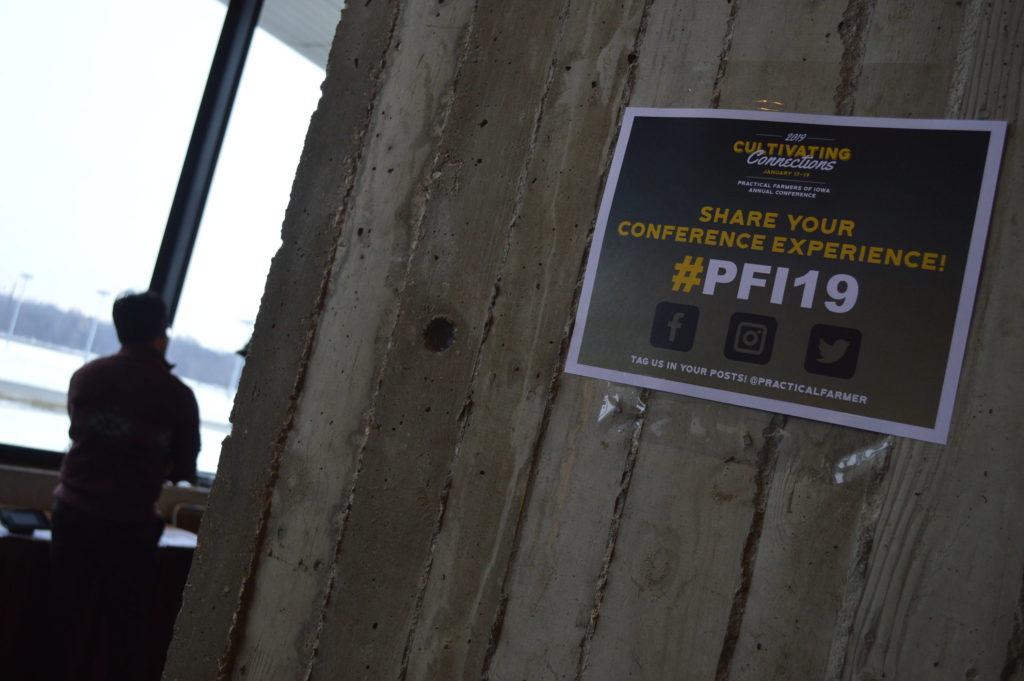 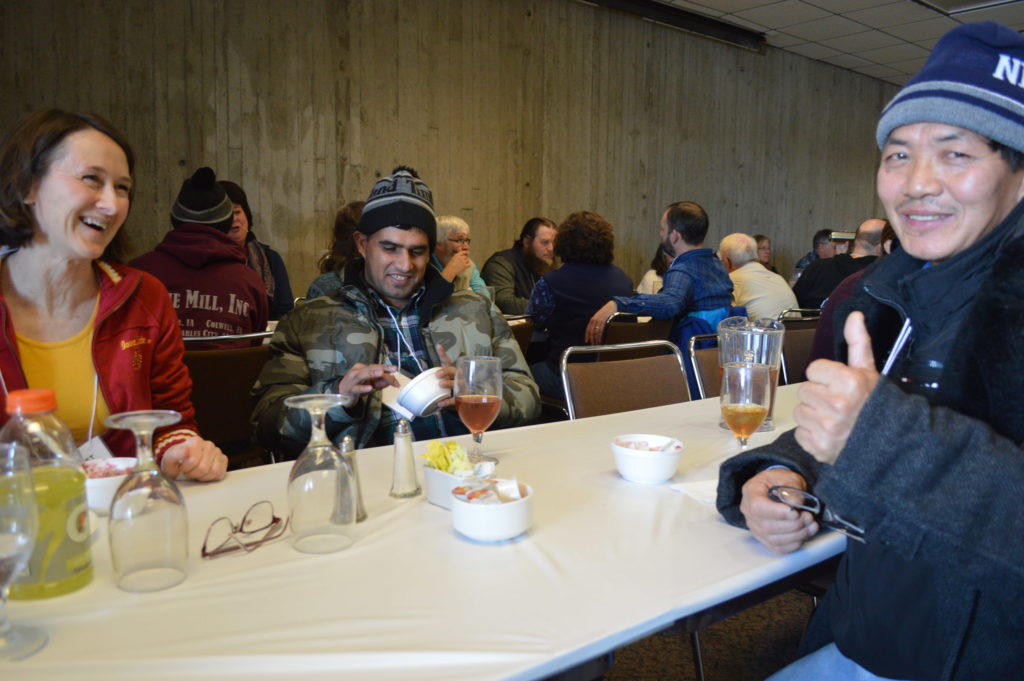