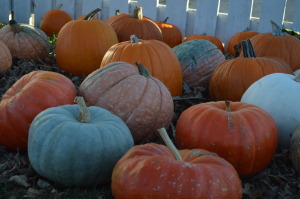 Pumpkins are sold at a farm in rural Chelsea. The Halloween forecast calls for a hard freeze in Eastern Iowa. (photo/Cindy Hadish)

If you’ve been lucky enough to escape the frost so far, you might have delayed those last-minute harvests of tomatoes, peppers and other veggies, but the clock is ticking.

According to the National Weather Service, frost is likely in the Cedar Rapids area Thursday night and a hard freeze – with temperatures below 28 degrees for several hours – is forecast for Halloween this Friday, into Saturday morning.

Every year before a predicted frost, I harvest as many tomatoes as I can. Even those that are green will ripen on the counter. Some of my peppers only began blooming this month, but I did find this tiny green pepper to harvest and left a few jalapeno peppers on my plants that I’ll have to grab if they survive the night. 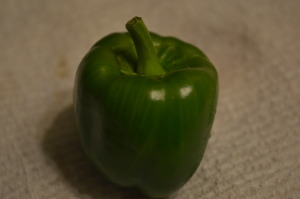 Tomatoes, peppers and other tender vegetables should be harvested before a frost. (photo/Cindy Hadish)

Swiss chard, kale and other hardier vegetables may survive the frost, and even a freeze, but it’s better to play it safe and harvest what you can now.

What is a hard or killing freeze? I’ve seen it defined several ways and am partial to the sustained 28 degrees, though some call for lower temps.

In either case, with Halloween night’s forecast of a frighteningly frigid 23 degrees, it looks like the end of the growing season in this part of Eastern Iowa.