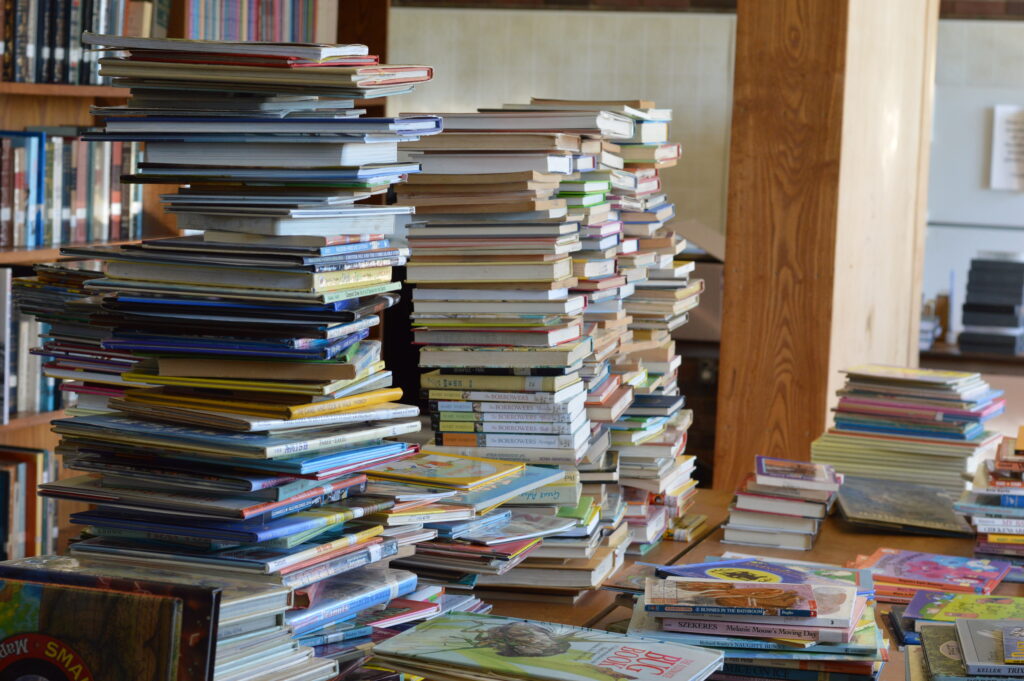 Stacks of books are ready to be shelved Oct. 30, 2020, at a new location in St. Joseph’s School after the Public Library in Chelsea, Iowa, was damaged in the August derecho. The library will reopen Nov. 4. (photo/Cindy Hadish)

CHELSEA, Iowa — Brad Wolter was still in training for his position as the new Chelsea Public Library director when Iowa was hit by the devastating Aug. 10 derecho.

Hurricane-strength winds severely damaged the early-1900s former bank building that housed both Chelsea City Hall and the library, ripping off a portion of the roof. 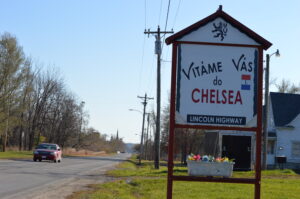 Since that time, this east-central Iowa town of about 250 residents — known for surviving multiple floods — has been without library services, but that will soon change.

Thanks to an agreement with St. Joseph’s Catholic Church, the library will open this week in temporary quarters in the East Room of the parish’s 1962 school building.

The school closed in 1968, but the building is still used for dinners, the annual Fall Festival and other occasions.

“I think people will be excited to come here,” said Wolter, who has been working to shelve books and otherwise organize the library for its reopening on Wednesday, Nov. 4, 2020.

He and library staff Judy Ochs and Geneva Bitterlie will keep the same hours the library maintained at its former site: 10:30 a.m. to 4:30 p.m. Mondays; 1:30-5:30 p.m. Tuesdays and Wednesdays; 2-7 p.m. Thursdays and 9 a.m. to noon Saturdays. Face masks are required due to the coronavirus pandemic.

The library is closed Fridays and Sundays. Other librarians, such as Dixie Forcht, have also been helping. 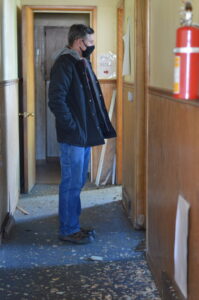 As with other libraries in Iowa and many across the United States, the Chelsea Public Library closed in March, due to the pandemic. It reopened with reduced hours in May, and regular hours resumed in June.

Wolter, who recently moved to rural Chelsea from Cedar Rapids, was hired one week before the derecho, in which straightline winds of up to 140 mph whipped across the state, flattening corn crops, crushing grain bins, damaging homes and businesses, upending trees and leaving hundreds of thousands of residents without electricity.

Three Iowans were killed in the windstorm.

Wolter, along with staff, library board members and volunteers, scrambled to move the library’s 5,000 or so books in multiple trips by trailer several blocks down the street to St. Joseph’s School, where it was agreed at that time to be a temporary storage site.

While the roof at the old site was leaking, it was mostly on the side of the building that housed the city clerk, who has since relocated to the Fire Station. Ochs, who was working in the library at the time, rode out the storm inside the former bank vault.

“Not too many books got wet,” Wolter said, citing about 20 on display on top of the bookcases that had to be discarded. Others were protected from the elements by the book shelves.

Still, the books were in disorganized piles that had to be tediously reorganized and reshelved. Stoves and other appliances in the room had to be moved to make space for more than 20 bookcases. 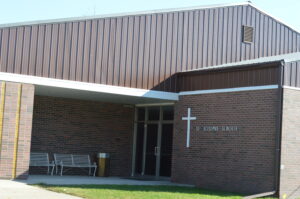 The idea for a public library in Chelsea was launched by Gail McGrew and Dorothy Jo Zmolek in 1970, according to the Chelsea sesquicentennial book. With donations, popcorn sales, cookbook sales and other fundraisers, the Chelsea Savings Bank building on Station Street — previously the First National Bank building — was purchased to use for the library in 1972.

Over the years, the library has hosted a book club, provided summer reading and “early-out” programs and more, in addition to offering access to children’s books, adult fiction, cookbooks, DVDs, reference books and other publications. The library also has three computers for public use.

The fate of the library/City Hall building remains to be seen, but Wolter is grateful to have a place where the library’s 100-plus cardholders will have access to books and other resources again. Otherwise, the nearest libraries are in neighboring Belle Plaine and Toledo.

“It’s not that everything is perfect,” he said, “but we think we can provide a service here.”

More: End of an era for Chelsea sawmill 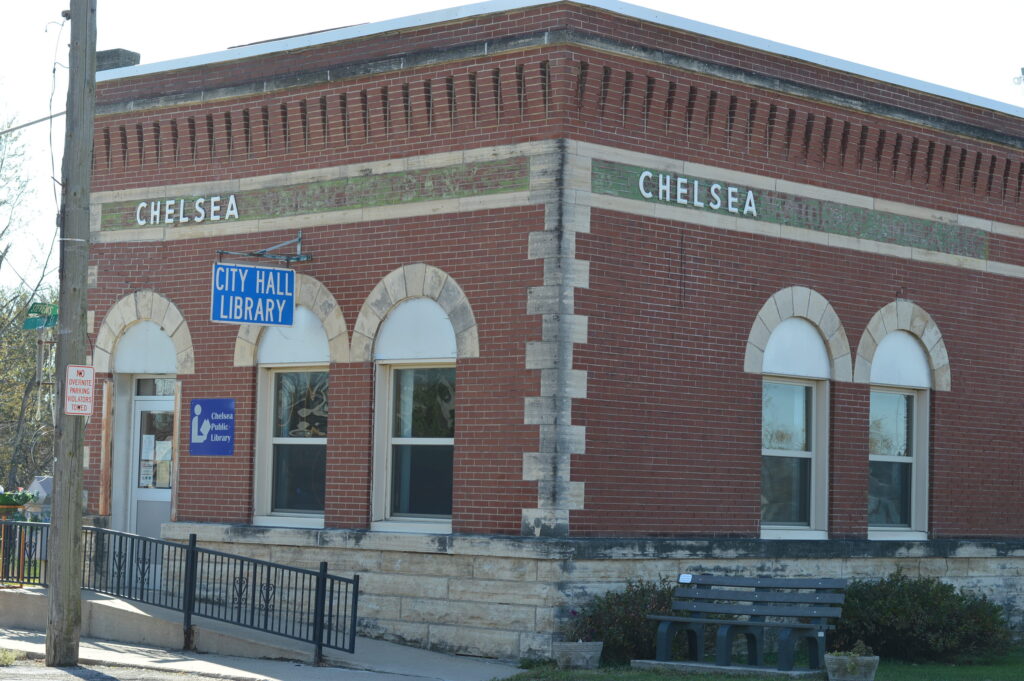 The former Chelsea Savings Bank building was purchased to use for the library in 1972. (photo/Cindy Hadish) 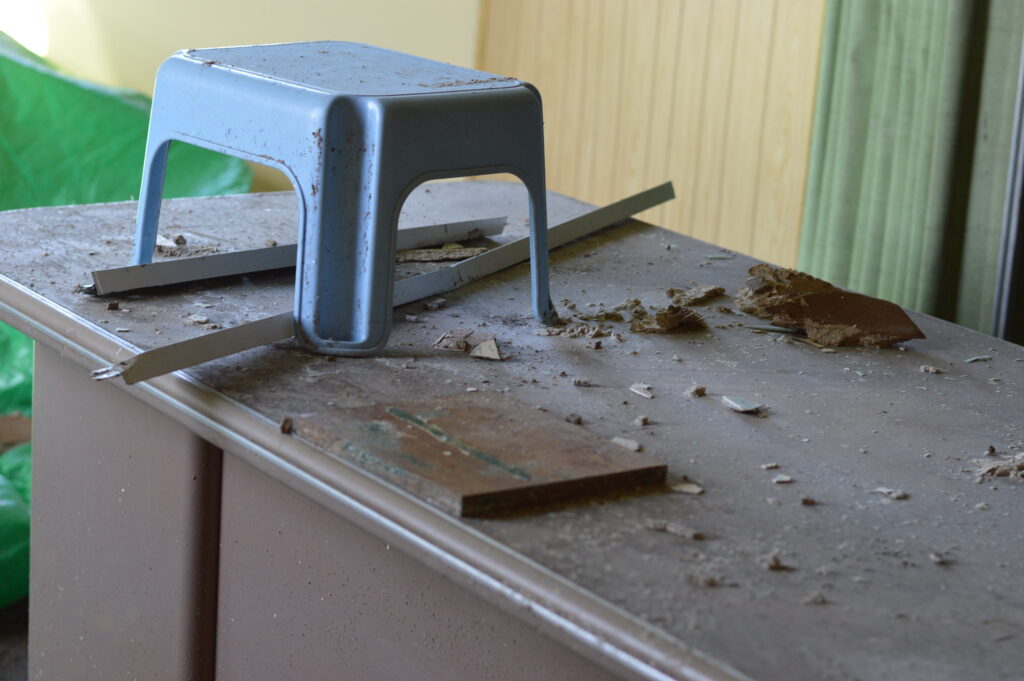 Debris remains on a desk after the Aug. 10 derecho at the Chelsea City Hall/Library building. (photo/Cindy Hadish) 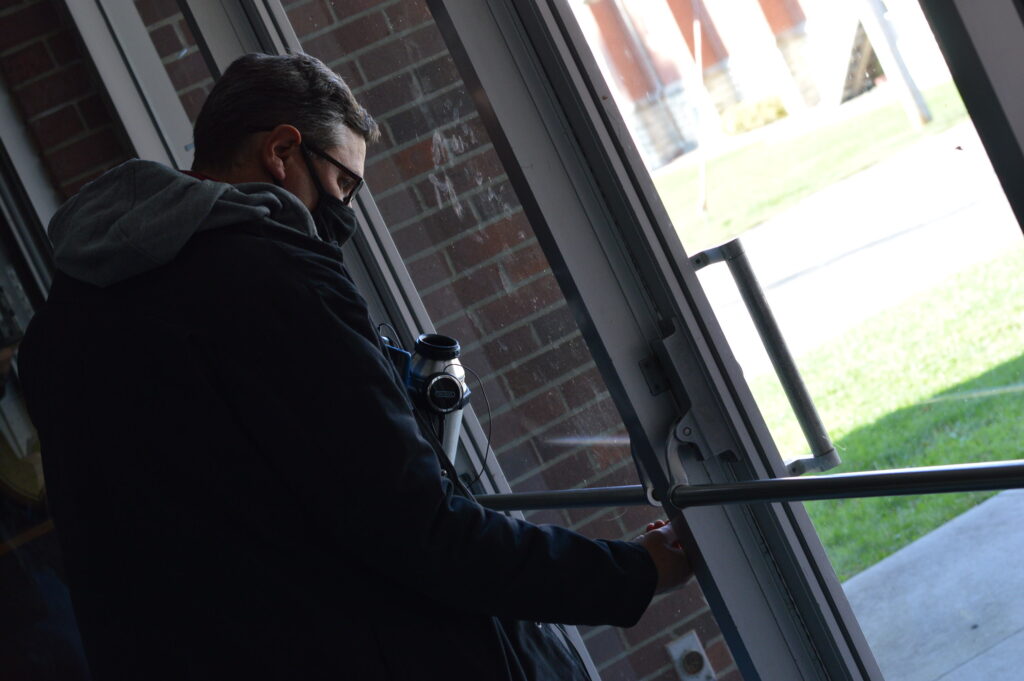 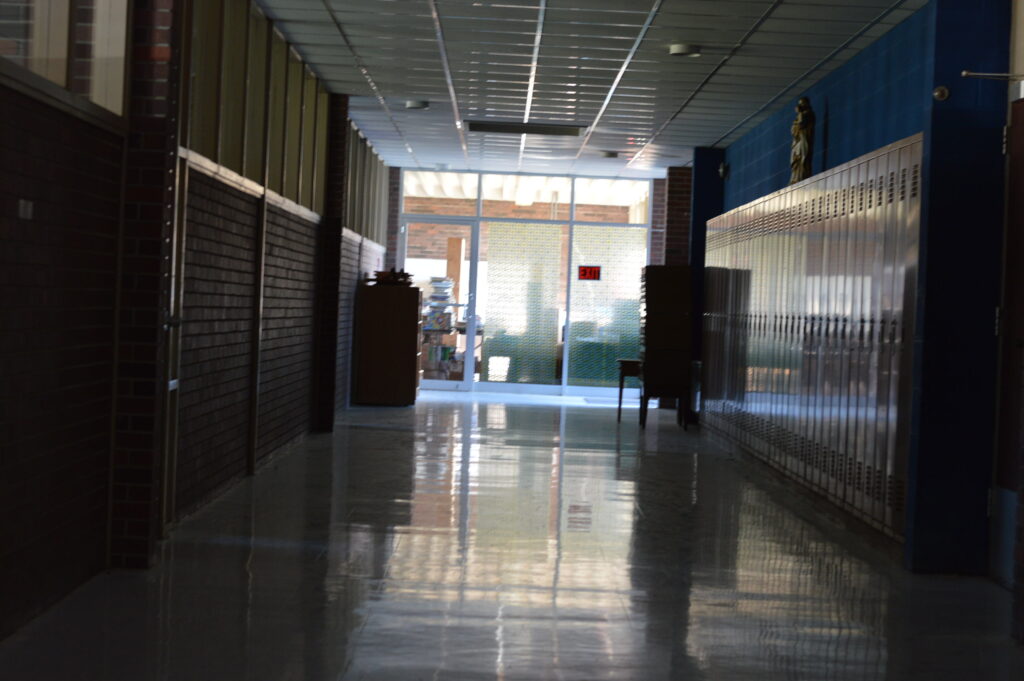 The hallway at St. Joseph’s School leads to the East Room, where the Chelsea Public Library is now located. (photo/Cindy Hadish) 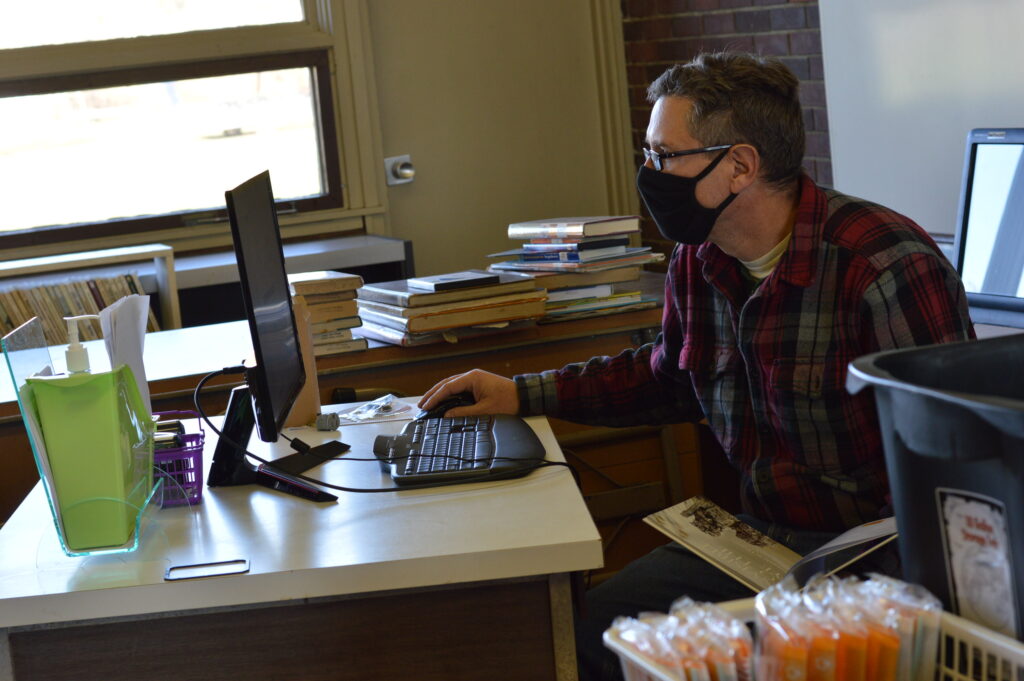 Chelsea library director Brad Wolter looks up a call number for a book on Oct. 30, 2020, as he prepares for the library’s reopening. (photo/Cindy Hadish) 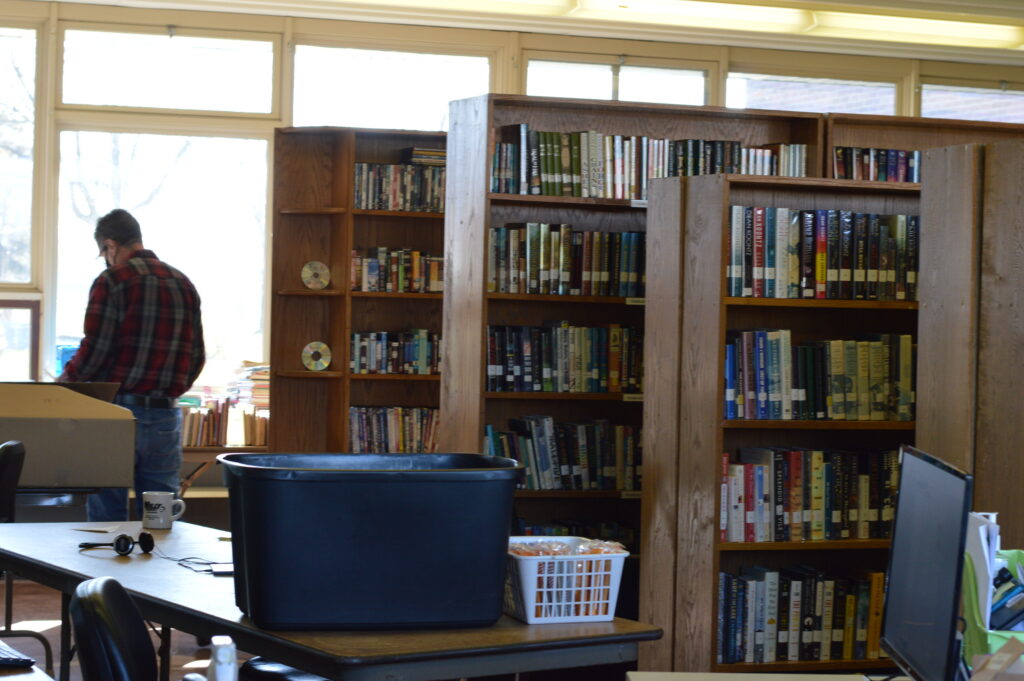 More than 20 bookcases and 5,000 books were transported from the Chelsea library to set up in St. Joseph’s School. (photo/Cindy Hadish) 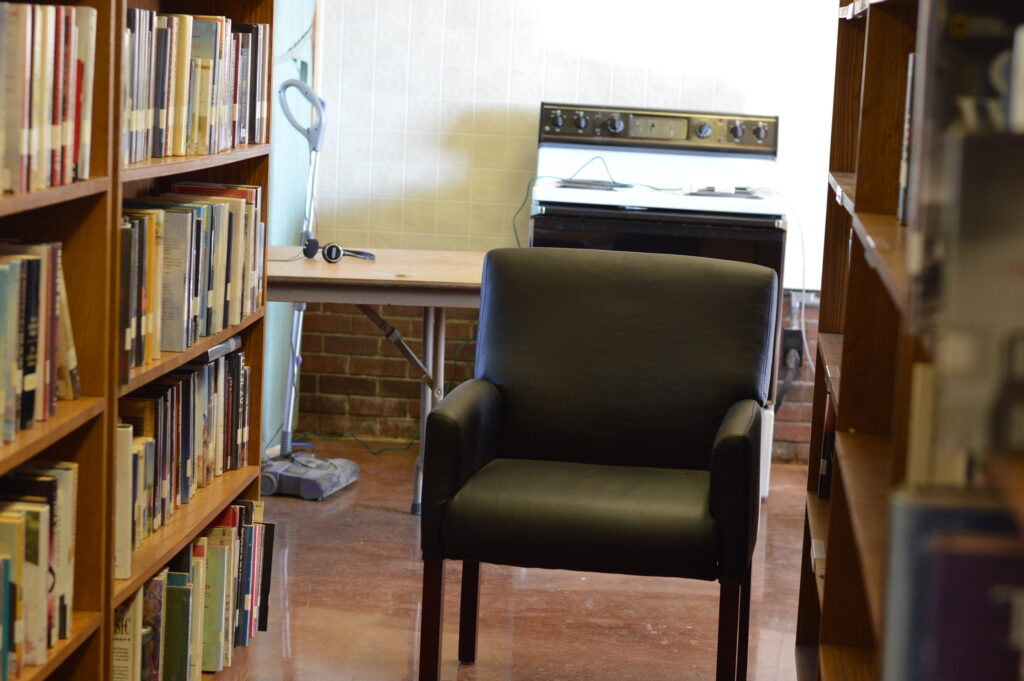 A stove and other appliances had to be moved to make space for the library. (photo/Cindy Hadish) 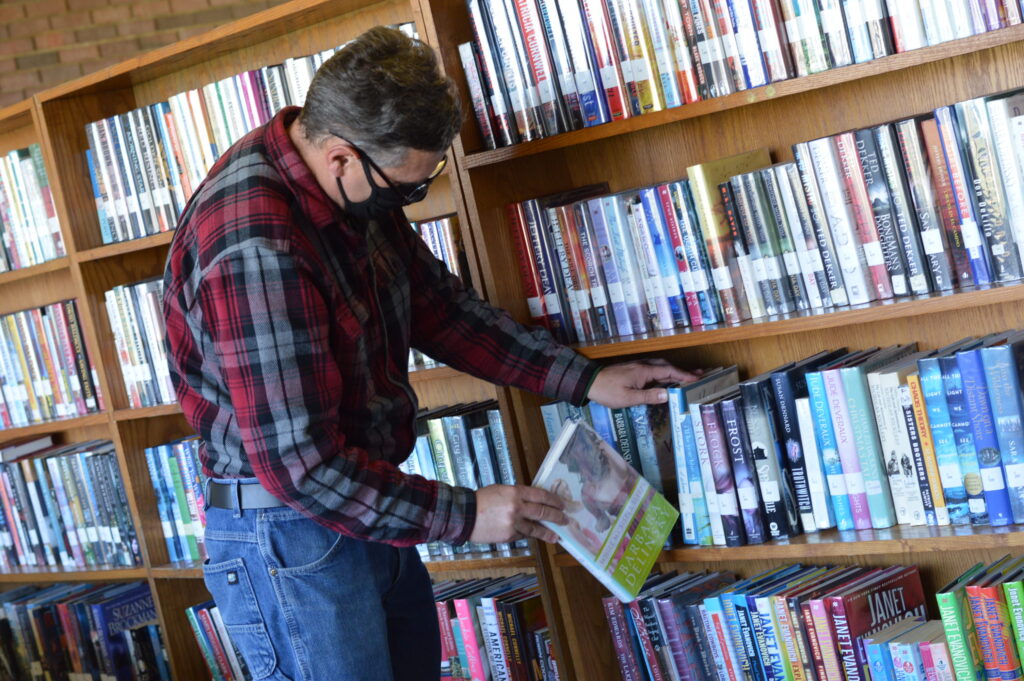 Chelsea library director Brad Wolter shelves a book on Oct. 30, 2020, to prepare for the library’s reopening on Nov. 4. (photo/Cindy Hadish) 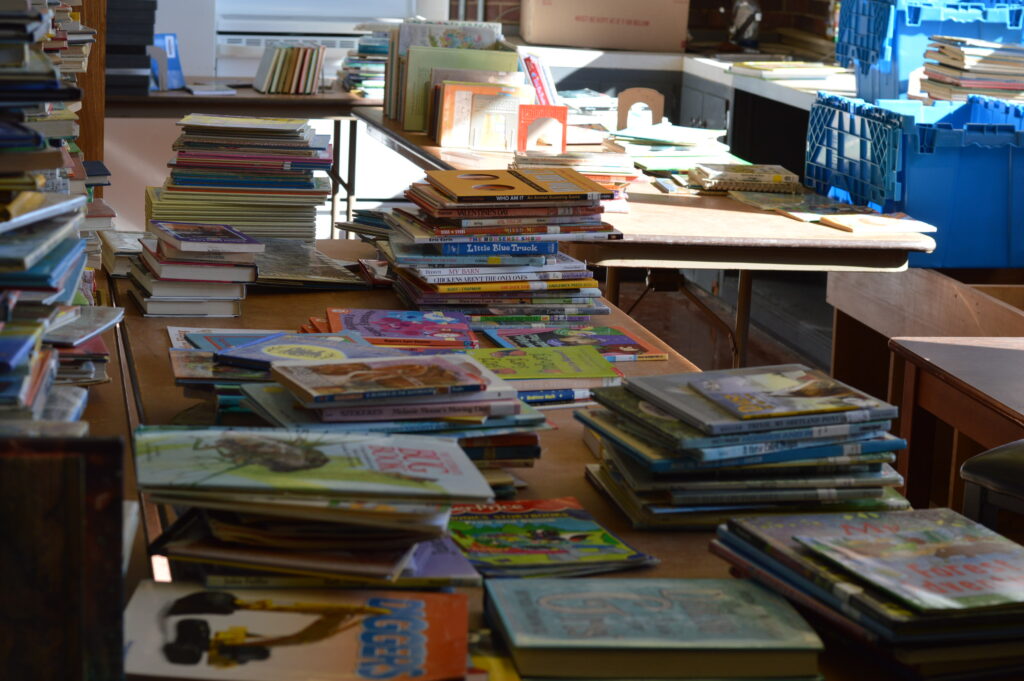 Children’s books are ready to be shelved in a new location for the Chelsea Public Library. (photo/Cindy Hadish)