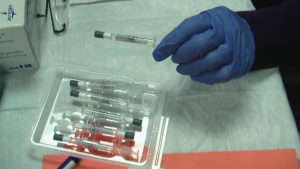 UPDATED with comments from the hospital treating the two patients.

During Iowa Governor Kim Reynolds’ press conference on Monday, May 18, Pedati said the Iowa Department of Public Heath is gathering more information on the cases.

“So far, children have made up a smaller proportion of the reported COVID-19 cases,” Pedati said. “However, late last week the Centers for Disease Control & Prevention shared a message alerting health care providers and public health professionals to this new kind of inflammatory syndrome that seems to be associated to COVID-19.”

The syndrome appears to cause fever and signs of inflammation throughout the body that may arise several weeks after a likely infection, she said.

“We are committed to protecting the privacy of our patients and cannot provide specific details regarding any individual patient in our care,” Corizzo wrote in an email. “The new information around this syndrome is evolving daily, and we continue to follow the latest CDC and Iowa Department of Public Health guidance regarding COVID-19 care.”

Corizzo wrote that since the COVID-19 pandemic began, most infected children have not developed serious respiratory failure symptoms as has been observed in adults. But in recent weeks, an illness has been reported associated with COVID-19 among children in several states and in other parts of the world.

“This illness, which may occur a few days to weeks after COVID-19 infection, appears to be a post-viral inflammation of the blood vessels including the vessels in the heart. It overlaps with Kawasaki’s disease, a rare but well described post-viral illness in children,” she noted.

Symptoms can include persistent high fever for greater than three days, rash and abdominal pain. Severe cases may require admission to a pediatric hospital or intensive care unit for management of low blood pressure and other complications.

“As a reminder, the best way to prevent children from becoming sick with COVID-19 is to avoid exposing them to people who are, or might be, sick with the virus,” Corizzo wrote.

Iowa made the disease a mandatory reportable condition under an order issued Friday, May 15.

Iowa Department of Public Health spokeswoman Amy McCoy said in an email that the two Eastern Iowa reports of possible multisystem inflammatory syndrome in children associated with COVID-19, received Friday afternoon, are the first to be reported in Iowa.

McCoy said no other details about the cases will be released at this time.

With 304 new cases on Monday, May 18, Iowa has had 14,955 confirmed cases of COVID-19, the respiratory illness caused by the novel coronavirus, and with four more deaths, so far, 355 Iowans have died of COVID-19.

As of Monday, 382 patients were hospitalized with COVID-19, compared to 374 the previous day, with 47 new patients admitted to hospitals, up from 33 on Sunday. Over the weekend, Iowa reported a total of 37 outbreaks in long-term care facilities. More than half of deaths in the state have been tied to nursing homes.

The CDC reported that on April 26, 2020, clinicians in the United Kingdom (UK) recognized increased reports of previously healthy children presenting with a severe inflammatory syndrome with Kawasaki disease-like features. The cases occurred in children testing positive for COVID-19.

Kawasaki disease causes blood vessels to become inflamed, almost always in young children, and is one of the leading causes of heart disease in children.

In the limited sample of eight children, the UK reported that 75 percent of the patients were of Afro-Caribbean descent and 62.5 percent were male. One of the patients died. Patients had a persistent fever and symptoms affecting multiple organs such as cardiac, gastrointestinal, renal, hematologic, dermatologic and neurologic involvement, along with  elevated inflammatory markers. Other symptoms include a rash, conjunctivitis, swollen lymph nodes, red, cracked lips and swollen hands and feet.

The CDC reported that as of May 12, 2020, the New York State Department of Health identified 102 patients with similar symptoms. New York officials said three of those patients have died. Cases also have been reported in other countries and in other states.